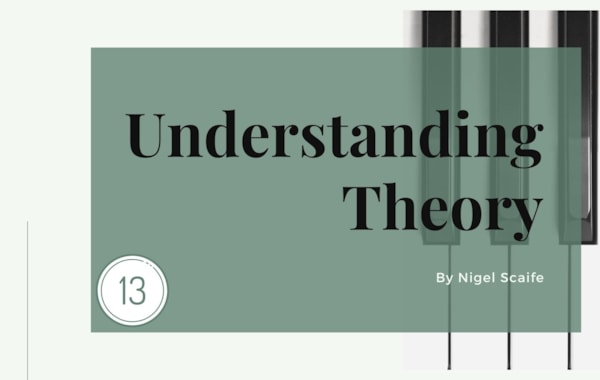 Don’t let the terminology put you off, says Nigel Scaife: fugue is among the most fascinating, beautiful and expressive of musical techniques

In Part 12 we looked at sonata form; one of the most significant and expressive of classical structures in music. In Part 13, we move on to the fugue...

Among the many genres in music, fugue has the unfair reputation of being the most cerebral and intimidating. The vocabulary of daunting terms used to describe its features – words such as countersubject, augmentation, stretto and cancrizans – bolster its reputation for being music which appeals to the head more than the heart – but that would be completely wrong!

It’s true that there is a cerebral element to the composition of a fugue, just as there are complex architectural diagrams and calculations required for the construction of a beautiful building. One might say that the workings of a fugue lie more on the surface of the music than they do in other genres such as dances, and perhaps that factor contributes to their forbidding reputation.

Composing a fugue might be seen as the musical equivalent of completing a fiendish Sudoku puzzle while writing a sonnet, but the effort can be rewarded for a performer or listener with a musical experience of an intensity which completely belies the underlying complexity. A little insight into fugal processes and procedures will pay off, especially if you are learning to play one.

As pianists we are fortunate in having a rich repertoire of fugues to explore. These range from what is widely acknowledged as the greatest set of them all – The Well-Tempered Clavier of Bach – through those found in Beethoven’s piano works, to Romantic-era examples by Clara and Robert Schumann, Mendelssohn, Brahms and on to Shostakovich’s set of 24 Preludes and Fugues, and Hindemith’s Ludus Tonalis.

In more recent times, there have been wonderful sets of fugues composed by Trygve Madsen and Nikolai Kapustin. Fugues come in a wide variety of styles and their difficulty ranges from an intermediate level to absolutely fiendish – for example those in Beethoven’s ‘Hammerklavier’ Sonata or Kaikhosru Sorabji’s epic five-hour cycle Opus Clavicembalisticum, which are certainly not for the faint-hearted! Check out Sorabji's cycle below.

What is a fugue?

There is no easy answer. Probably no other type of musical piece has had so many different definitions. These range from the jokey – ‘a piece in which the voices enter one by one while the audience leave one by one’ – to a piece in ternary form, a contrapuntal procedure and, in the thinking of the eminent analyst and critic Sir Donald Tovey, a musical texture.

According to Tovey, ‘Fugue is a texture the rules of which do not suffice to determine the shape of the composition as a whole.’ While this definition still doesn’t tell the whole story, Tovey was right to point out that fugue is not actually a form at all but rather a way of creating a piece of contrapuntal music from a single musical idea. As Grove’s Dictionary of Music and Musicians declares:

The voices entered one by one

The term ‘fugue’ derives from both the Latin fugere, meaning to flee, and fugare – to chase. So we can think of it as a piece which is about the mutual pursuit of parts: one part starts and then is followed by other parts which chase after it, or perhaps flee from it.

Nearest to the mark for a definition is actually the first part of the joke – a piece in which the voices enter one by one. As a term it is used to designate a genre but it can also relate to a compositional technique used within other musical forms such as a sonata – or in the finale of of Beethoven’s Piano Concerto No 3 in C minor. The fugue begins at bar 230 with the entry of the cellos: see the example below. 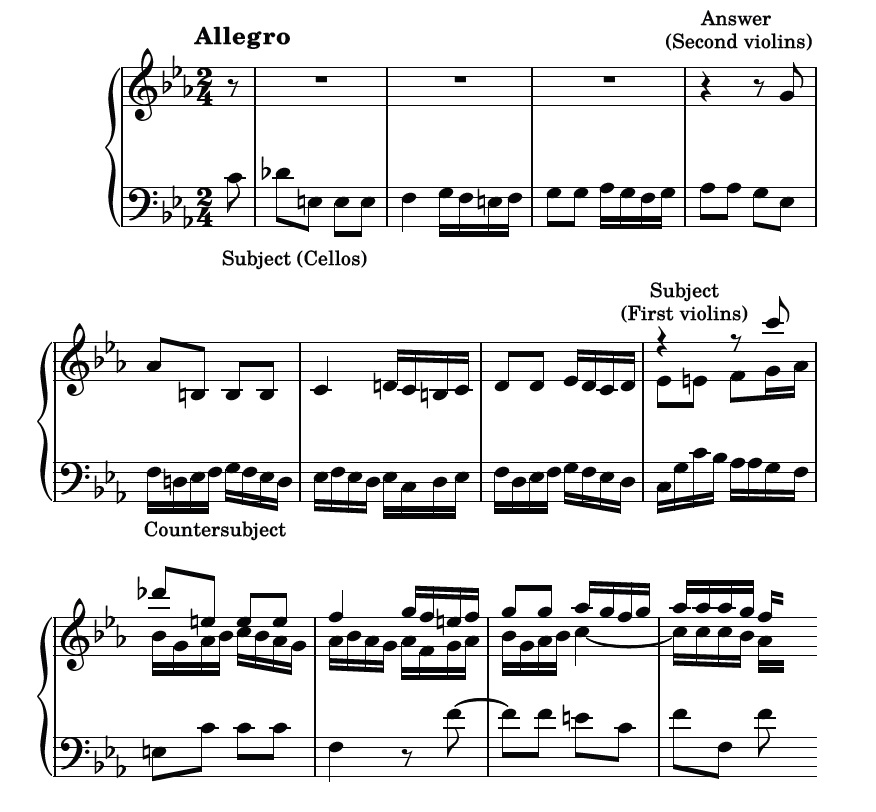 Notice how Beethoven’s fugue opens with a lively, characterful idea that the listener already knows as the Rondo theme played by the pianist at the start of the movement and heard many times subsequently. It’s an unforgettable theme which can easily become an irritating ‘ear worm’. This is a feature of most good fugues, which have a strong melodic and rhythmic identify at their heart.

Previously this idea had a harmonic accompaniment but now it is presented as a single strand of melody starting on middle C. In this context it is called the fugal subject.

This is followed, or pursued by, the same idea transposed a fifth higher played by the second violins whilst the first part continues with counterpoint running alongside it – called the countersubject. The imitation of the opening idea at a distance of a fifth above (or a fourth below) is called the answer.

When Beethoven treats his Rondo theme as a fugue subject within the last movement of the C minor Concerto he creates a highly charged moment in the piece which is full of dramatic tension. But he doesn’t continue to create a complete standalone fugue here, as non-fugal elements follow. Often when the answer is heard there are alterations to some of the intervals which are made to maintain the tonality or melodic impetus, so it isn’t always an exact transposition.

In the Beethoven example, the answer is adjusted slightly at the end as the music leads into the entry of the third part. When an answer is not an exact transposition of the subject it is called a tonal answer. If no intervals of the subject are altered in the answer it is called a real answer. The distinction between the two is relatively unimportant to the overall concept of fugue, and the tonic (subject) to dominant (answer) movement is not one that is particularly designed to stress key contrast.

With fugues which are not diatonic, but are written in a freely chromatic style, adjustments are not needed for tonal reasons. In fact, in non-tonal fugues the answer doesn’t need to come in at a distance of a fifth higher or a fourth lower at all. Instead, the answer can be at any distance, with the intervals of the subject being kept intact by the free use of chromaticism.

After the answer is heard in the finale of Beethoven’s concerto, a third melodic strand is woven into the texture as the first violins play the same idea again – the subject – but now starting two octaves higher than when it was first played by the cellos.

Without analysing this fugue any further, we can see how Beethoven is able incorporate standard aspects of fugue into a larger composition: the parts come in one by one with the same distinctive thematic idea, with the first statement being in the tonic and the second, the answer, coming in a fifth higher (or fourth lower) to create a contrapuntal texture. This is an example of an ‘incidental fugue’ which appears within a larger work. What about fugues which are complete pieces in themselves? In the next article we’ll delve deeper into the fascinating world of counterpoint and analyse an example from Bach’s Well-Tempered Clavier which illustrates the main features of how a fugue is constructed.