In the previous part, 7, we looked at how changing keys gives form, colour and tension to music – and why it’s crucial to understand the circle of fifths.

In this article we’re going to look at some of the ornaments that shape our music.

In musical contexts the word ornament is used to refer to a decoration or embellishment of a melody. Ornaments are often short notes that emphasis particular points or sections in a melody for expressive effect.

This expressive role is at the heart of what ornamentation is all about. As pianists we need to make sure that we are playing the ornaments correctly to maximise their expressive impact within our personal interpretation of the music. Ornaments are not just pleasing ‘added extras’. They usually play an integral part in the melodic framework and content of the music. A piece with a lot of ornamentation can be forbidding, especially if the signs are not all fully understood.

To get to the point where we are confident about interpreting the ornaments in any given piece we need to be able to
answer a range of questions. On what note should the ornament start? Should it come before the beat, on it, or after it? How long should any dissonance last? The answers will depend on the style and period of the music, the tempo and the musical context overall. The three main national ‘schools’ in Baroque music, for example – French, German and Italian – each had their own conventions when it came to ornaments, and then there are differences of approach over the centuries to consider as well, so it can be a bit of a minefield!

But don’t despair – this article and the next inside issue 96 will cover the basics including trills, grace notes, acciaccaturas, mordents, turns and appoggiaturas. Knowing how the most common ornaments operate will make all the difference and there is rarely ever a single correct way to interpret an ornament. However, the more informed we are about the general principles, the better chance there is that we can both honour the composer’s intentions and make sure we are being as expressive as possible.

Ornaments were often improvised in performance in earlier times, especially during the Baroque and early Classical periods. Because of their rhythmic flexibility and complexity, composers tended to use shorthand symbols to show what they intended, such as the two below:

As the 19th century went on, composers became increasingly concerned to notate their music with precision and so ornaments were more likely to be written out in full, although the shorthand symbols were still used, as they are in fact up to the present day.

To try to describe in theoretical terms how the various ornament symbols should be realised in sound to some extent runs counter to the whole notion of ornamentation, which is so much about spontaneity, rhythmic flexibility, subtlety and a personal response to the expressive aspects of the music.

In trying to show through standard notation how each symbol operates, there is the danger that their rhythmic nuances are lost. Rhythmic notation, with its mathematical ratios, is not completely up to the task of showing the irregularity of many ornaments, which is partly why composers used shorthand symbols in the first place! These symbols are in fact a good way to indicate what is meant because they don’t tie the notation down to exact ratios, but instead indicate a degree of irregularity and rhythmic flexibility. The problem arises when the symbol has to be explained to someone who is not ‘in the know’, at which point the symbol has to be pinned down to its basic features irrespective of the musical context.

The most common ornament is the trill. A trill is a rapid alternation of two notes a tone or semitone apart. This is shown by tr above a note or tr~~~~~~~~~~. The exact way in which this is interpreted depends on the style and tempo of the music. These aspects will affect the number of repetitions and their speed. In music written before about 1825-30 – Renaissance, Elizabethan, Baroque and then Classical music up to the time of Beethoven – trills generally start on the note above the main note. This gives an even number of notes:

In the Classical period trills often end with this pattern which helps to round things off smoothly:

This is sometimes shown through the use of another type of ornament which is known as a grace note:

Those small-sized notes shown above, the grace notes, are usually played relatively quickly, but as with all grace notes their speed should reflect the overall character of the surrounding music. They are not taken into account as far as the rhythm of the full-size notes is concerned, so the time values ‘add up’ correctly in theoretical terms without them.

Groups of two or more grace notes are usually shown as beamed semiquavers with a slur, and may come on the beat or before it. To determine how to play them you will need to consider the musical context and ask yourself why the composer used this way of notating their music.

For example, did they want to indicate a rhythm that couldn’t be notated in any other way? Do the notational conventions of the era in which the piece was written suggest a probable rhythm? Do they enhance or emphasize a main note or are they more about adding melodic fluidity and a sense of direction?

Now back to the trill: after about 1825-30 trills usually start on the main note and often include the ‘end pattern’:

If the upper note of a trill needs an accidental, this is shown above the tr sign or in brackets above the note:

The issue of whether to start on the upper note or the note itself is often far from clear-cut! Chopin, for example, seemed to follow the Baroque practice of starting on the upper note and would indicate that the trill is to start on the note by adding a small grace note at the same pitch before the main note (as, for example, in the long trilled melody within the Nocturne Op 62 No 1).

The acciaccatura is a very short note played before the main note and is colloquially called a ‘crushed note’. In fact acciaccare in Italian means ‘to crush’. It is usually played on the beat but might also be played just before it. It is usually written as a small-sized quaver with a slash through the stem and is often joined by a tiny slur to the main note: 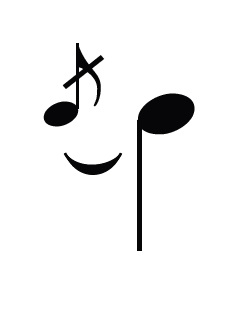 In part 9, we'll be covering some more of the most important ornaments of the Baroque and Classical periods, including mordents, turns and the appoggiatura.