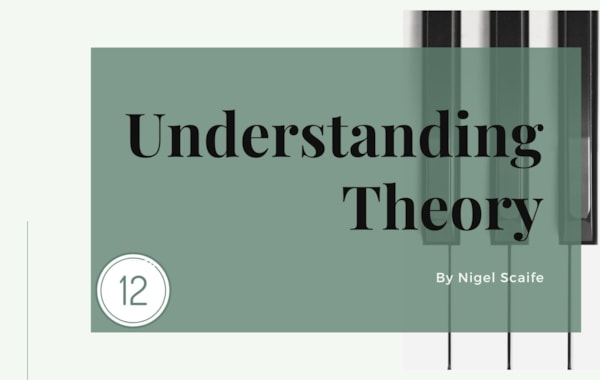 In Part 11 we looked at the rich possibilities of the A-B-A structure. Now we move onto sonata form...

Our exploration of theory has now brought us to the structural principles which underpin many of the greatest piano pieces ever written, from the Classical sonatas of Haydn and Mozart through to Beethoven, Schubert, Chopin, Brahms and on into the music of our time. The term itself – sonata form – is misleading as it doesn’t refer to the way in which an entire sonata is constructed. Instead it describes a particular approach to composition, especially of first movements.

The name is also misleading in that this approach to form is used in many genres, especially of instrumental music: not only sonatas but also overtures, symphonies, concertos and string quartets.

What sonata form isn’t is a rigid structure governed by rules to be followed by composers according to their own lights. Think of it more of a principle by which musical material is organised; a tonal process or strategy. The fundamental concept is of an opposition initially stated, then intensified and eventually resolved. This might sound a bit abstract, but the idea of dynamic opposition being resolved is at the heart of sonata form. The resulting musical drama is what it’s all about.

The danger of setting out the underlying principles, as they are outlined below, is that when we come to analyse a given work we do so by considering the ways in which it deviates from the textbook definition of ‘sonata form’ rather than by properly looking at it as a unique musical entity. This is a point well made by the late pianist and scholar Charles Rosen in his book Sonata Forms – note the plural! 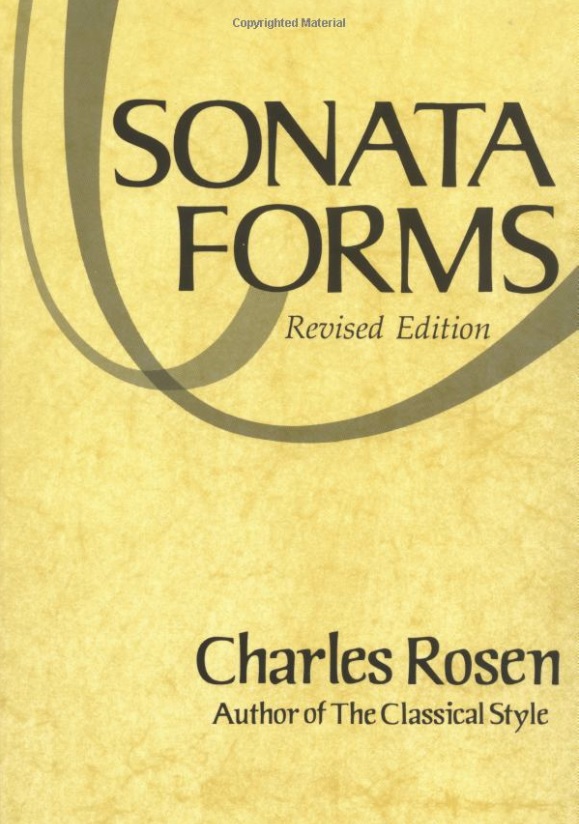 The standard description ‘applies rather badly to many 18th-century works, and in general misrepresents the practice of that century.’ So bearing these important caveats in mind, let’s now look briefly at the historical roots of sonata form and how its core features came into being.

Originally the word ‘sonata’ (from the Italian suonare, to sound) referred to a piece of music ‘sounded’ by instruments as opposed to a piece which is sung. For a long time the term didn’t refer to any formal pattern, but the Classical-era piano sonata has its antecedents in the keyboard sonatas of Domenico Scarlatti and the work of later 18th-century Italian composers such as Baldassare Galuppi. ‘For most of the 18th century,’ observes Rosen, ‘sonata form does not exist as a separate, clearly definable form – and this is true even for most of the second half of the 18th century. What does exist is a series of procedures for enlarging, articulating, and dramatizing short patterns of two, three, and four phrases – brief dance forms and song forms.’

These forms are generally cast in either binary or ternary form (covered in Part 10 and Part 11 of this series), and so it is unsurprising that sonata form draws on elements of both forms. The harmonic structure of a sonata-form movement has a binary shape, as the music moves from tonic to dominant, followed by a repeat, and then back to the tonic at the end via modulations.

In terms of thematic development, however, sonata form is more ternary in nature: 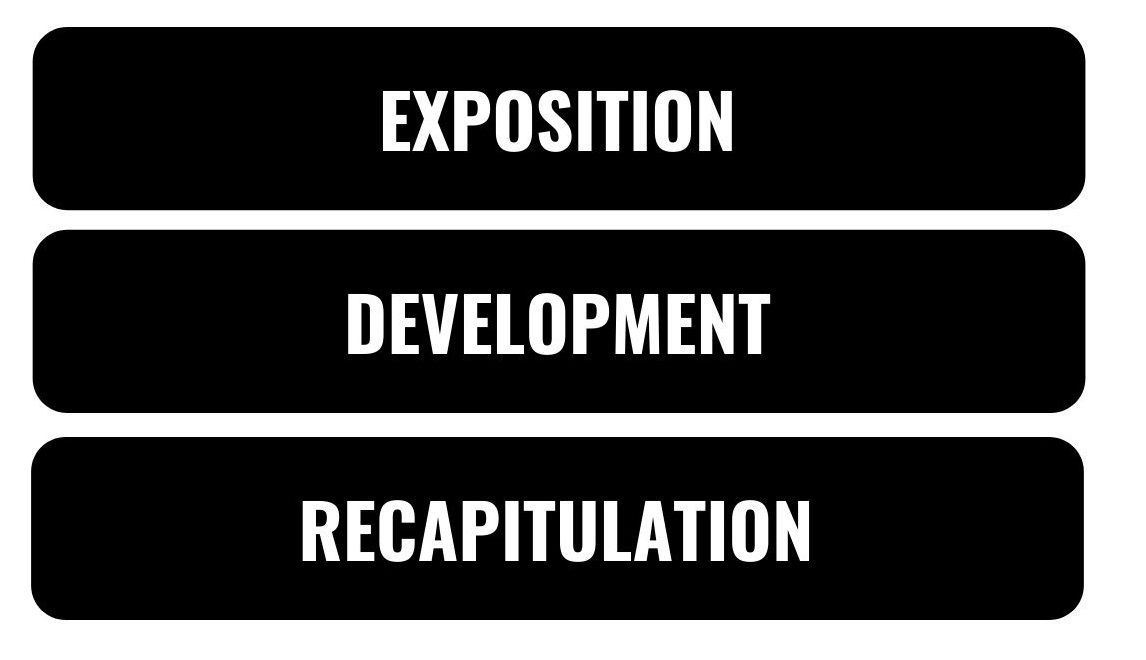 In the exposition section the composer ‘exposes’ or presents the core material. At first there is a collection of themes stated in the tonic key: the first subject group.

The composer may begin with a particularly arresting idea; an introduction of some kind, perhaps at a slow tempo such as in Beethoven’s ‘Pathétique’ Sonata Op 13, where the opening material is later integrated into the main body of the movement. Within the first subject group there is often a degree of repetition, allowing listeners to absorb the ideas which will later undergo development.

The repetition of these initial ideas may lead into a modulation known as a bridge passage. This modulates to the dominant of the home key, or to what is often called a ‘half close’ on the dominant of the dominant (V of V). This allows the second subject group of ideas to be stated in the dominant, if the music is in a major key, or the dominant or relative major in a minor key. Of course, it doesn’t always happen like that! Take Beethoven’s Op 53 ‘Waldstein’ Sonata, for example. Beethoven opens the second subject group with a chorale-like theme in the distantly related key of E major, the mediant, which greatly intensifies the effect of a polarising contrast.

Compared with the first theme, the second subject group tends to be strongly contrasted in mood and texture, often more lyrical than the opening ideas. Towards the end of this section, a closing theme or themes may serve to wrap up the exposition and lead towards a final cadence on the dominant.

At this point, especially in Classical-era sonata form, a repeat sign often brings the entire exposition round again.

Alternatively a short transition or codetta leads back to the tonic followed by a repeat or, if no repeat is marked, the music may carry straight on to the development.

During the course of the 19th century, the exposition repeat became something of a convention: one commonly ignored in performance of Romantic piano music such as Chopin’s B minor Sonata. However in this work, as in other sonatas, the last couple of bars of the exposition are slightly adjusted so that for the first time they lead naturally back to the start and for the second they lead seamlessly into the development: like a kind of musical junction. Ignoring the repeat may upset the equilibrium of the music as the temporal relationship and proportion between the sections is altered – often working against the composer’s stated or implied intentions.

In the development section the ideas presented in the exposition are creatively explored. Another misleading term: the development of musical ideas takes place throughout a sonata-form movement, not only within its middle section. Composers may build musical drama and sustain the narrative with infinite variety at this point.

Different themes may be combined so that they appear in a new light, or a theme might be broken into fragments. A theme first heard in a major key could appear in the minor and so on. The composer may begin the development with the idea presented in the transition or codetta passage heard at the end of the exposition, in order to create a seamless movement between sections.

Sometimes an entirely new idea (known as episodic material) is introduced within the development section: a device frequently encountered in piano sonatas by Mozart such as K283 in G and K333 in Bb major. Modulation often occurs within a development section, perhaps abruptly and frequently. Schubert typically moves through many keys and in relatively close succession, sometimes taking us far away from the home key.

In early Classical sonata movements the development section is often relatively short and harmonically unadventurous. From the turn of the 19th century, however, it expanded and grew into a space where the composer would fully explore the inherent possibilities of the material and create a greater degree of instability, tension and excitement. Beethoven was the great innovator here: his piano sonatas are central for an understanding of how sonata form evolved from the Classical era into the Romantic.

Towards the end of the development section, there is a harmonic preparation for the return to the tonic key through reaching the dominant seventh of the tonic, known as the retransition. As with all features of sonata form, there are notable exceptions. For example, in his First Piano Sonata

For example, in his First Piano Sonata Brahms concludes the development section with a dominant seventh on the
tonic. Such harmonic and thematic twists and turns are at the heart of what makes sonata-form music so expressive and endlessly fascinating!

The recapitulation then restates the music of the exposition in a slightly different way. It usually opens with a restatement of the first subject in the tonic, just as it was heard at the start, and this is a significant moment within the structure. Composers handle recapitulation in many different ways. The return of the opening idea might be understated and creep in without fanfare; at the other end of the scale there may be a huge build-up of tension to be released in an outburst of glory. Whatever the process and approach, we will now hear the first subject ideas quite differently from the start, having experienced the music of the development and absorbed more fully the nature of the material being presented.

Now the composer finds a way to arrive at a point where the second subject group can also be stated in the tonic, as opposed to its original key. This section is sometimes called a transition and may be an altered version of bridge passage used in the exposition. Much of the original exposition will be restated, but not necessarily complete. The recapitulation sometimes introduces new material which can be called ‘secondary development’.

However the composer deals with this, the second-subject ideas will reappear in a new guise, transformed by what has happened from their previous statement and now heard in the new light of the tonic key. In fact sometimes the recapitulation begins with the second subject, especially if the first subject material has been to the fore in the development section.

Substantial sonata-form movements tend to close with a coda – ‘tail-piece’ as it is in the Italian – which rounds off the music and brings a sense of balance to the narrative. The coda is often a significant part of the whole movement, as in Beethoven’s ‘Appassionata’ and ‘Waldstein’ sonatas. I like Charles Rosen’s formulation: ‘The purpose of a coda is, if we take a common-sense attitude, to add weight and seriousness: like an introduction, it promotes dignity.’

Having followed the journey of sonata form, we might try to understand how and why it has fascinated and stimulated composers for well over two centuries. I think of it as an interplay of contrasting ideas, a way to present conflict and resolution in sound. It is about the tension within a harmonic framework and a set of thematic ideas which can interact with that framework in expressive ways. The methods and approach to sonata form may vary immensely, but the overall effect will be to reconcile tension between opposing ideas.

To return to our caveats at the start – there is a textbook definition of ‘sonata form’ which we’ve covered here, but every sonata has its own form and its own framework of expressive communication which we should hear and analyse on its own terms.