In part 5, we looked at primary triads and chords in close and open position and introduced the various ways of describing them using Roman numerals, chord symbols and figured bass.

In this article, I’d like to consider how one chord relates to another and how tonal harmony has some commonly found chord progressions which are fundamental to the way it operates.

Understanding some of these chord ‘pathways’ used throughout centuries of tonal music will unlock a deeper understanding of how music works. We’ll also cover the most important cadences and another vitally important aspect of harmony – the rate of change between chords during a phrase, section or entire piece. This is called harmonic rhythm.

Let’s start by looking at the three primary chords – tonic (I/i), dominant (V) and subdominant (under-dominant: IV/iv) – which can be thought of as the main pillars of tonal harmony.

Chord progressions using these chords are common in many styles of music, from style gallant pieces written in the early 18th century to the most recent pop song based on the 12-bar blues. The tonic chord can be thought of as the centre of gravity in tonal music, where it has a greater or lesser attraction and pull for other chords in the key, depending on what those chords are.

When the tonic moves to the dominant a definite sense of moving away from the ‘home ground’ of the key to somewhere quite different is created.

When the dominant moves back to the tonic there is a strong sense of return. If a 7th is added to the dominant chord this feeling of return is even stronger still. This is because the dissonance created by the 7th, the leading note, is resolved into the consonance of the tonic.

If you play the progression below, for example, you can hear how the tritone, or augmented 4th, between the F and B resolves outwards and how the dominant 7th chord has a natural pull towards the tonic: 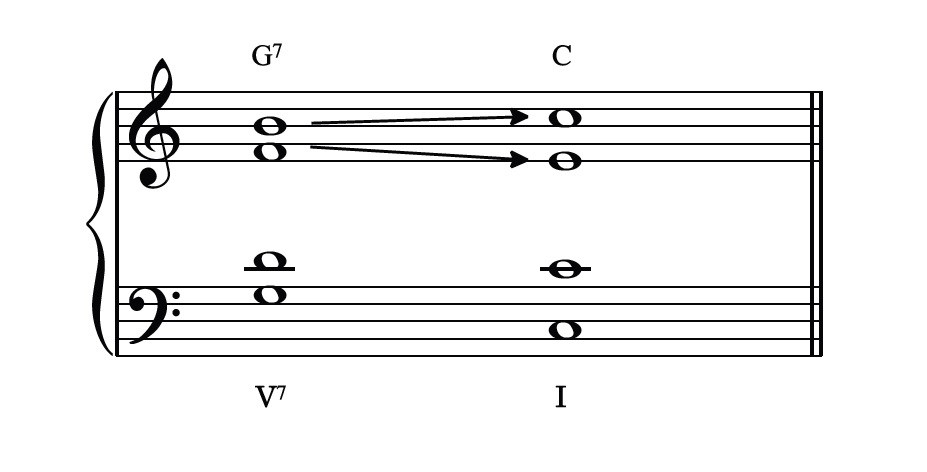 The V-I or V7-I progression at the end of a phrase, section or entire piece of music is called a perfect cadence. As with other types of cadence, this marks a natural breakpoint, just as punctuation does in written text. The perfect cadence repeated at the end of a symphonic movement by Beethoven, for example, will definitely provide a full stop!

They have quite different aural effects:

Much less of a sense of movement is created when the tonic moves to the subdominant than when it moves to the dominant. The reason for this is partly due to the fact that the tonic note is present in chord IV, which makes the movement smoother and gives less impact. It is interesting to note that while the I-V-I progression is the foundation of much Western classical music, the I-IV-I progression is much more prevalent in African- American traditions such as soul, gospel and jazz.

The IV-I progression at the end of section or whole piece of music is called a plagal cadence, often referred to as the ‘amen’ cadence for obvious reasons.

Both chords are major in major keys, but in minor keys the final tonic can either be minor or major: 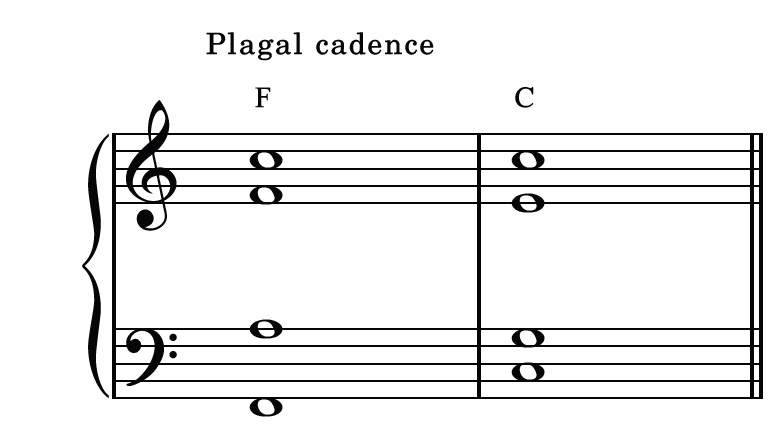 When a pieces in a minor key ends with a major tonic chord it is called a Tierce de Picardie, or Picardy third. This is something that is typically heard in Baroque music and can occur at the end of either a plagal or perfect cadence, as both end on the tonic: 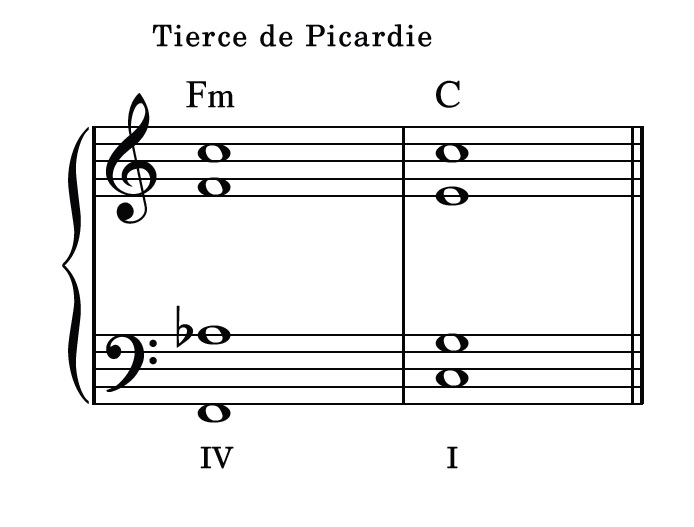 It is worth noting that chord IV and chord ii have two notes in common. This is important because as a result of their common notes these two chords can be used as alternatives leading to the dominant.

This can be shown as follows:

The ii/iib-V-I progression is especially powerful because the supertonic (chord ii; ‘iib’ refers to chord ii in its first inversion) has a similar relationship to the dominant as the dominant has to the tonic.

In other words, chord ii is like a ‘dominant of the dominant’ – although not precisely as in major keys it is a minor chord. Their bass notes are a 5th apart when descending and this sturdy relationship provides a really firm sense of harmonic movement.

The ‘two-five-one’ progression is a vital and prolific component of jazz harmony as well as being very common in classical styles.

These two standard harmonic pathways can be combined in I-IV-ii-V-I progressions which use both the subdominant and the supertonic:

Now let’s turn to the issue of harmonic rhythm – the speed at which the harmonies change – which is an essential part of musical expression and form. Generally, a fast rate of harmonic rhythm produces a sense of activity and movement, while a slow harmonic rhythm tends to give a more static effect which might even result in an enervating feeling.

However, the relationship between the rate of harmonic change and the tempo of the music is a variable one. For example, in many fast pieces the harmonic change is relatively slow at the start so that the tonic is firmly established.

In classical music there is often an acceleration of harmonic rhythm as a cadence is approached. This gives the music a sense of momentum and rhythmic drive towards the harmonic goal.

Listen to a recording of the opening of Mozart’s ‘Jupiter’ Symphony (No 41) and follow along with the first violin part (and the accompanying analysis) in the excerpt shown at the top of the next column. You will see how the tonic and dominant are established and how the pace of change increases just before the imperfect cadence. Note that in bars 3 and 7 there are appoggiaturas (leaning notes) on the first and third beats: 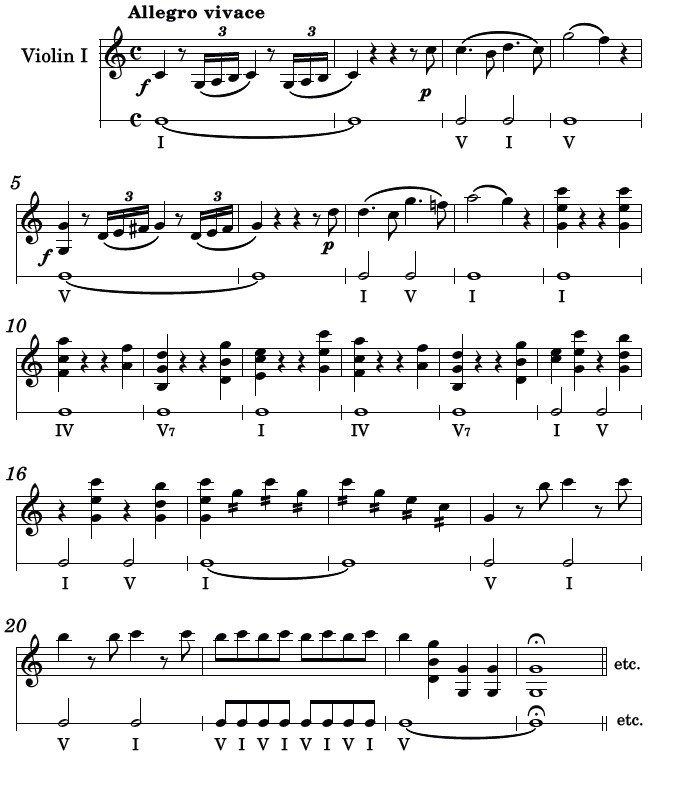 The second analysis, below, shows a deeper, more macro level of structure in which the harmonic functions are prolonged.

For example, the alternating chords in bars 19-21 are considered as an embellishment of the underlying dominant harmony:

Mapping the harmonic rhythm of the music you are learning is a useful way to deepen your perception of its inner workings. Most importantly, it will really help you interpret the music in performance in a way that engages the listener and brings it to life.