When pianos went to war Alec Coles-Aldridge discovers the Victory Verticals: a fleet of pianos designed specifically for the battlefield

Main image: A group of Japanese soldiers in WW2 enjoy a break with a piano

Music has been a part of war for thousands of years. As far back as 680BC in Ancient China, drums were used for their physiological impact on the battlefield; a tactic repeatedly used by Ottoman Janissary Bands, the Swiss Fife and Drum Corps, and during the English Civil War, to name but a few occasions. The modern world is no exception as military bands are still considered an integral component of the armed forces. Indeed, after a performance by the Royal Marine Band Service in 1982, an officer stated to the bandmaster “that if he could have given his men rifles and put them ashore at that moment, they would have walked right across the Falklands and nothing would have stopped them.”

With the use of music in war so abundantly clear, you may be wondering about the piano. How does a large, heavy and difficult-to-transport instrument have a role in war?

To start, there is one piano that deserves immediate attention. Enter the Victory Verticals, otherwise known as G.I. Steinways. 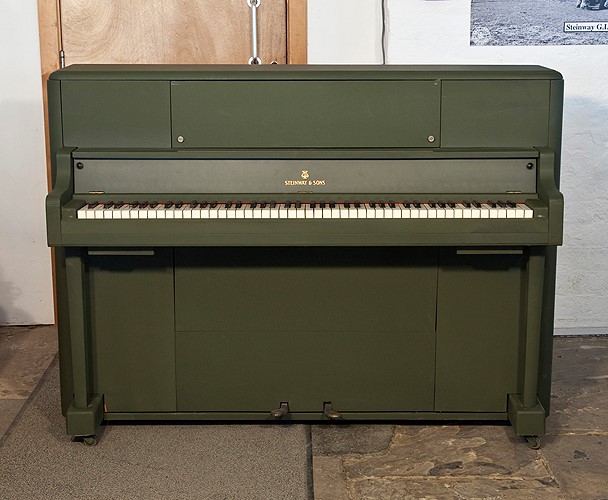 The Victory Verticals were produced during WW2 as a piano designed for soldiers. The plan was to build economical and durable pianos that could be sent to, or near, the front line in order to boost morale. The first consideration was what to build the piano from. With restrictions already in place to limit the use of iron, copper, brass and many other essential materials for the war effort, the piano used a tenth of the metal found in an average piano. Instead of copper bass strings, soft iron was used, and in replacement of ivory covered keys, celluloid keys were designed. In addition, a range of extra features allowed the piano to survive the tough conditions it faced on the battlefield, such as anti-insect treatment, water-resistant glue and handles to help soldiers carry the piano. The colours too were chosen for their suitability for the battlefield; dark wood, olive green, grey and black were offered.  In total, over 2,000 Victory Verticals went into military service.

Alongside pianos, there have been plenty of pianists caught in the horrors of war. Most well known is Władysław Szpilman, who features in the 2002 film The Pianist. Another pianist caught in WW2 was André Tchaikowsky, whose family suffered terribly at the hands of the Nazis. Both of these Polish pianists’ lives are incredible stories of survival and tragedy. In the case of Szpilman, his ability to play the piano allowed his family to afford enough food to survive the Warsaw ghetto. Piano music too plays its part in conflict. Frédéric Chopin’s Polonaise in A major, Op. 40, No. 1 (nicknamed the Military Polonaise) was played as a rallying call to the Polish people every day on Polish radio after the 1939 German Invasion.

Considering the far-reaching nature of conflict, it is perhaps not surprising that pianos and pianists have been influenced by war. Reassuringly however, the piano has been, in the case of the Victory Vertical, a positive force. And in the case of Chopin’s Polonaise, a source of inspiration, strength and hope.