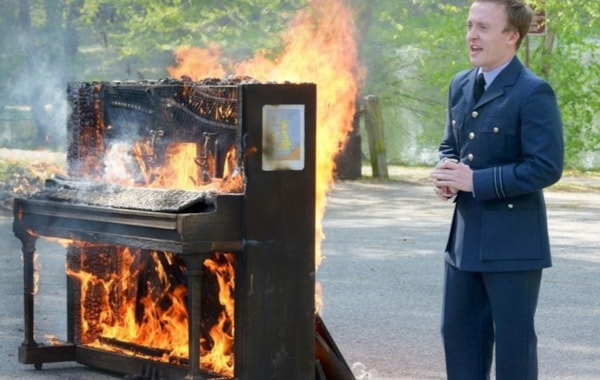 For many readers, the idea of burning a piano will fill them with horror, disdain and disgust. But fear not, piano burning ceremonies are not practised by piano-hating cults who ambush them on the way to the Royal Festival Hall.

Instead, they are a cherished tradition practised by those noble and heroic organisations we call the Royal Air Force and the United States Air Force.

The origins of piano burning are shrouded in legend and mythology. Claims have been made that the growth of the Royal Air Force during World War One resulted in the widening of recruitment beyond the “gentleman”. These new arrivals were considered un-cultured and lacking in the education of a proper member of the Royal Air Force. Consequently, piano lessons ensued, much to the distaste of the new arrivals. An unfortunate incident at a squadron clubhouse caused a significant fire; enough to destroy a piano. The piano lessons stopped, and soon other squadrons were using the same solution.

However, other legends refer to a pilot during World War Two who possessed considerable skill at the piano. After every battle, he would provide merriment and joy. But when the pilot was killed in battle, the tunes ceased. The remainder of the squadron felt the most appropriate tribute was to burn his piano.

What is known more truthfully is that piano burning ceremonies are still an essential part of the Royal Air Force, and the tradition has spread across the pond to the United States. They are now usually held after the passing of comrades; in 2015 a piano was burnt to remember two British Servicemen killed in a helicopter crash in Kabul, Afghanistan. They are held as a commemoration for disbanded units; in 2014 the 65th Aggressor Squadron, part of the 57th Adversary Tactics Group (United States Air Force), burnt a piano in response to the deactivation of the unit.

The procedure of piano burning ceremonies vary; some are carried out quite literally as it says on the tin, whilst others start with a pre-burning attack on the piano by sledgehammer-wielding pilots. Others place a beer for a fallen comrade on the piano along with the issued content of the serviceman’s clothing locker. One unlikely story claims that a piano was “delivered” by an F-15E Strike Eagle prior to burning!

Its use in the art world

Alongside military traditions, piano burning has been included in visual art. The Japanese artist Chiharu Shiota set fire to a piano as part of the 2011 Mona Foma arts festival in Tasmania. Douglas Gordon featured a burning piano in his video The End of Civilisation. Gordon considered the piano to be the “ultimate symbol of western civilisation”, making a piano’s death a potent display.

We do sincerely hope that this brief account of piano burning evaporates any initial concerns surrounding why pianos are burnt. As we owe a huge amount of debt to the Royal Air Force and the United States Air Force, as well as hundreds of other forces worldwide, may we keep allowing them to continue their tradition. It is worth adding that the pianos burnt are not Steinway grand pianos; usually cheaper upright pianos are subject to the flames!

By Alec Coles-Aldridge. Alec is a graduate of the Royal College of Music with a Bachelor of Music Degree. Read more from him below: