Performing from home in a dressing gown? Is this a dream? It certainly isn't! Steinway artist Yulia Chaplina talks about her experiences of being a concert pianist during the current crisis

If anyone had told me that I would be doing a recording for BBC Radio 3 from home in my dressing gown, I would have laughed very loud. Either that, or it would have ended up being just a dream that I would not have remembered in the morning.

It’s now neither a joke nor a dream. It’s reality.

It has been quite strange for me to adapt to the idea that my living room is now a several thousand-seater concert hall, my mic is a BBC Studio, my husband is a producer and a cameraman (although I am now managing to film myself) and my in-laws are the sound engineers. Is it fun? Yes and no!

YES, because I am enjoying what I do: I am in a hugely privileged position to have a beautiful grand piano and it’s a real pleasure to keep sharing my music. I feel there is a need in music now more than ever - music can cheer up moods and give courage; it offers compassion and can heal.

Aside from regular online concerts on social media, I have started a project called Music for the Mind in which I record and send pieces to my audience that they might enjoy listening to in the hope of brightening their day. I now see playing as my duty for the society. I am also vitally dependant on the performing aspect of playing the piano. I cannot live without concerts. Live streams, just like ordinary concerts, give me an adrenaline rush which is a serious addiction for any serious performer.

NO, because the famous conductor Sergiu Celibidache once said: “A recording? It’s like going to bed with a picture of Brigitte Bardot!” There is some truth in his words, although I will argue that, right now, there is no other way to do it. I can certainly admit that the quality of my home sessions cannot be compared to any of the professional CD recordings and concert hall broadcasts.

Oh, how would I have loved having even half the crew of the wonderfully professional recordings and streamings available to me - they'd organise the microphones, the edits… the list goes on forever. What I certainly can say is that the amount of preparation is proportional to the number of minutes you are recording/broadcasting - it is the 5:1 ration, not taken into account the number of hours of practice.

Never could I ever think of all the possible issues that arise unexpectedly and threaten  live or recorded broadcasts from home in a typical 2-person household. Here are some for your amusement, in no particular order: The washing machine finishing the cycle at the quietest moment of a beautiful Chopin Nocturne; the neighbours’ dog woofing along to the Tchaikovsky Barcarolle; the rubbish collection machines churning so loud that the last page of Rachmaninov's Second Sonata sounds like an echo in the woods; my husband storming in during the middle of an online masterclass session asking whether I would like some lunch now or later; the postman banging the door so you can sign for a parcel during the final chord of your best video take. The list goes on.

Of course, not to mention the absolute paralysis when suddenly your computer says it needs restarting 10 minutes before the broadcast!

Listen to Yulia perform on BBC Radio 3, live from her home, below 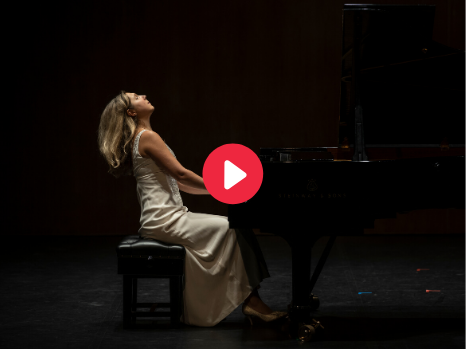 However, the hardest thing to cope with is that there is no separation between work and life, although someone might accuse me of not being a ’proper’ pianist who lives and breathes only for the music. Indeed, I have lots of musician friends who don’t need any social interaction – they are happy playing the piano all day long.

I do also feel that I am really worried about the future - when this will become manageable? When can we return to normal? What will that new ‘normal’ be? Will the live concerts be back in the way they were before, or has this pandemic changed the world so dramatically that online streaming will become the new standard? Will people choose to sit at home and stream classical music the way that we watch Netflix?

All performing arts have been put through a huge test and we need all the support now more than ever. The only thing that gives me hope is that, if we have so much music available online, maybe there will be new audiences drawn to classical music and it will become much more popular and accessible. So, returning to Celibidache, let’s settle with having lots of “pictures” of music for now, so we at least remember how beautiful live music is in real life.

Keep up to date with all of Yulia’s online performances here.