The score appears inside Pianist issue 112

Evocación serves as a prelude to the Suite Iberia, a collection of 12 piano pieces depicting colourful and vibrant sounds from Spain. Albéniz lived throughout most of his adult life away from his homeland and before he embarks in this journey of characteristic soundscapes, the opening piece of the suite is a nostalgic haze of memories that recall Spain through a misty filter. With the exception of the brief central climax, most of Evocación is surrounded in delicate textures and sonorities and there is an over-abundance of quiet dynamic markings culminating in a ppppp in the final page. It is a good idea to reserve your quietest and most intimate playing for the Coda and have a healthy dose of cantabile in the opening of the piece, making sure that the melody is reminiscent of the ‘Cante Jondo’ style of flamenco singing.

Managing textures is one of the most challenging technical aspects of the piece. As Albéniz frequently enjoys criss-crossing the hands, it is crucial that notes in the accompaniment do not accidentally become part of the melody. Bars 10 and 48 are good examples of this, as the top notes of the accompaniment are played with the thumb there is a real risk that they will standout too much and alter the shape of the melody. In the Copla section starting at bar 55 (a Copla is the melodic middle section in an ABA structure in many Spanish piano pieces), the left hand must exercise great melodic control and be very expressive with a warm cantabile sound. Albéniz uses this register in the piano to imitate the sound of a Baritone singer to great effect. To help the balance in the passage, the right hand must be as delicate as possible in the high register, although the off-beat accents at the start of each group of quavers can be reinforced to create a magical distant bell effect.

Other interesting textural moments are in bar 95, where the player must try hard to preserve the staccato quavers against the sustained doted minims which all happen within the right hand; and in bars 79 to 91 where the melody splits as a duet between both hands. Throughout the Suite Iberia, pianists have to battle constantly with Albéniz’s often dense pianistic writing and although Evocación is a much less demanding piece still presents interesting challenges for arranging the music to suit the individual hands. There are a few moments when notes in the left hand can be easily picked up by the right to allow the player to move quickly back to the bass, such as the final quavers in bars 27 and 32. To maintain a continuous legato in the melody, the penultimate quaver in bars 105, 106 and 118 and 120 all can be played by the left hand.

During the climatic central section there are a number of pedal notes that need to be anticipated, such as the C and G in bar 77 and D flat and A flat in bar 81. It will be more characteristic of this style of music to play the 5ths together before starting the melodic line in the left hand, rather than play all three notes in an even arpeggiato. Continuing with this anticipation of the bass will help to add tension to the passage which culminates with the chord in bar 92. Here, it will be possible to play the top E natural with the right hand, but playing it as written will allow for the final A flat pedal note to resonate. I will also recommend bringing out the E natural that resides in the middle of the chord as it creates an interesting voicing effect.

As a general rule, try not to be scared of long pedals and enjoy some of the many dissonances that get captured by being brave and keeping your right foot down for as long as possible. It is all very much depending on individual instruments, venues and players, but try experimenting and see how long you can maintain the same pedal in bars 15-16 or 51-52. Have faith in Albéniz and avoid the temptation to disobey the pedal markings in bars 99-102. The resulting sound from keeping all the harmonic dissonances for those 4 bars is one of the most beautiful moments in the piece.

One of the biggest challenges of this composition is the frankly horrendous key of A flat minor that fills up the start of every stave with 7 flats. To make matters worse, the key moves frequently and further accidentals keep surfacing in a dense ocean of double flats. Albéniz’s insistence to maintain the key signature can be counteracted by a bit of enharmonic thinking on behalf of the performer. Reimagining isolated chords or passages in different keys will help enormously both when learning and memorising the piece. A couple of good examples are the first chord in the right hand in bar 51 (A double flat , C flat and E double flat) which is actually G major, or bar 135, where we are presented with a horrendous mess of flats and double flats which ends-up being a B major chord. In Bar 75 we are briefly in the key of C major, even though the key signature stubbornly indicates every possible flat, and the equivalent passage 4 bars later is in D flat major. You can also remember easily the parallel chords in bar 91 as being part of the whole tone scale. These are a few examples of how to approach the reading challenges presented by all these accidentals.

A glimpse of the first page: 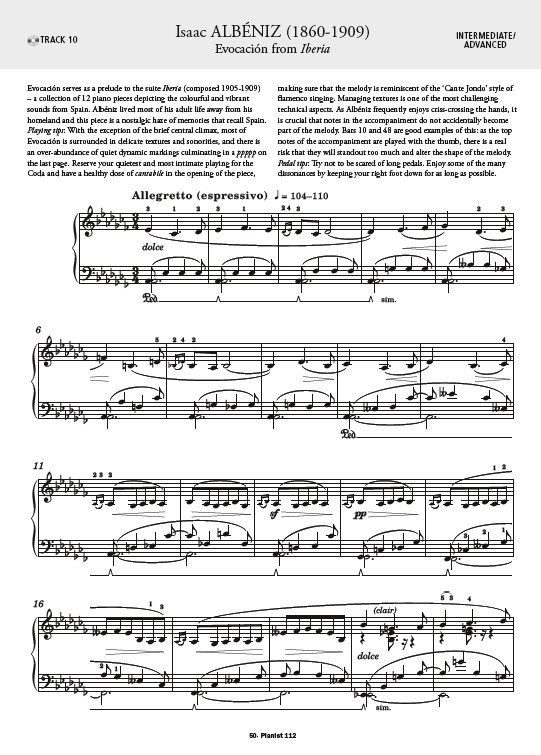 A final bit of advice for a successful performance is to count carefully all the long pauses that precede new sections. As pianists our natural tendency is to want to move things along, as we do not possess the ability to alter the sound of a note or chord once that it is played, unlike singers or most other instrumental players. However, you must carefully count and make sure that you are generous with the pauses in the chords in bars 45 and 92. This is particularly important later on in the coda, where the tied dotted minims in bars 135 and 139 might seem interminable. Remember also to factor in the counting the various slower tempo markings and performance indications that Albéniz adds to this passage. The combination of ‘très lointain’, ‘rall molto’, ‘Largo’ and ‘pppp’ creates and absolutely magic atmosphere, so please don’t rush through it.