This pianist has been streaming weekly concerts for TWO YEARS straight Armenian-American pianist Kariné Poghosyan will stream for the 100th and final time in her series on Friday 25 March, 8pm EDT (midnight GMT). Full details on how you can watch along can be found below

As the world began shutting down in March 2020, pianists around the globe had to make the agonising decision to cancel all performance dates until further notice. Covid wreaked havoc right across the music industry, forcing venues to close and drying up many performers' main sources of income. But one thing that kept many piano lovers sane was the emergence of regular online live performances from our favourite pianists.

Within days, the likes of Igor Levit, Boris Giltburg and Dominic Ferris were giving weekly performances on their social channels. The concept caught like wild fire.

The likes of Angela Hewitt, The Lang Lang International Music Foundation, the Kanneh-Mason family and Eleonor Bindman among countless others started to join in. Soon enough, we were spoilt for choice when it came to piano entertainment.

Two years on and the majority have stopped the regular live streams as venues have reopened again, but one pianist who has continued is Kariné Poghosyan. The Armenian-American concert pianist has been streaming weekly for the entire two years.

This Friday, she will stream her 100th performance since the pandemic began. It's quite a feat.

"On the Wednesday of the first week of lockdown in New York [in 2020], I timidly posted a question on my Facebook page," she explains. "Since all my concerts had been cancelled and we all had nowhere to go, I asked if anyone would be interested in a Facebook Live 'Mini Concert' on Friday night. I felt so shy about it that I was genuinely planning on coming back in a few hours and just deleting the post. To my surprise, by that time there had already been a couple of dozen excited replies. Then after that first one on March 20, 2020, viewers kept asking for more and more, and it turned into a weekly series!"

Kariné says that the most beautiful thing about the two-year journey has been the connections she has been able to make and witness over her livestreams. "Relatives stuck on different continents would re-connect during the livestream, strangers would meet and become friends," she explains.

"I even had a viewer, whose good friend had heard me perform the Mussorgsky 'Pictures' in Italy and who was now ill. [They] asked me if I could play the Mussorgsky as a special note of encouragement to him. I did play it and then asked the viewers to put their prayers and good wishes in the comments, and within seconds, there was an outpouring of love for this man on the other side of the world from me - it was just extraordinary. If there was ever a question about just how incredibly essential music is to maintaining our common humanity, my series I hope will help answer that." 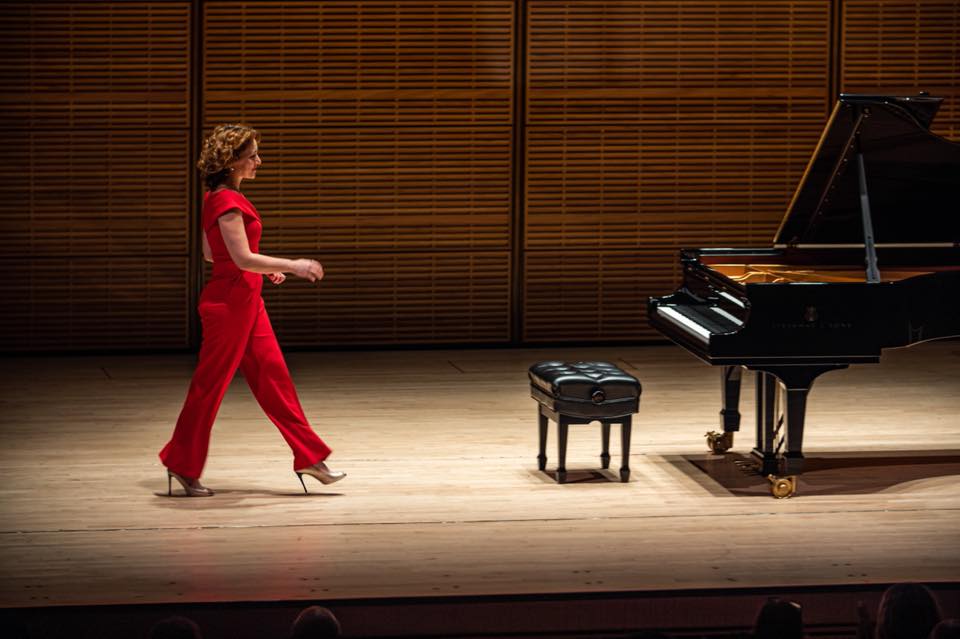 "The most beautiful thing has been the real-time connection with listeners from all over the world, all coming together at the same time each week to bond over great music."

"I have loved this medium so much that I will definitely do more livestreams, though not on such a regular basis. However, as things are opening up and in-person concerts return, I will look for every opportunity to incorporate live-streaming, so as to share the experience with those who cannot be there physically."

Kariné has recently been signed by Navona Records, where she will record her next album of works by Grieg, Coleridge Taylor, and Liszt. She has also started an exciting undertaking on her Patreon page. Patreon subscribers will be able to access a monthly virtual recital series titled “Musical Time Travels!” It will include 12 full solo programmes from various historical periods in 12 months, with a global audience of patrons tuning in on Zoom.

Select upcoming in-person performances include solo recitals at Carnegie Hall, Ehrbar Saal in Vienna and the Soraya Performing Arts center in Northridge, California, as well as concerti performances with Wallingford Symphony and Evanston Symphony Orchestras. You can keep up to date with Kariné here.