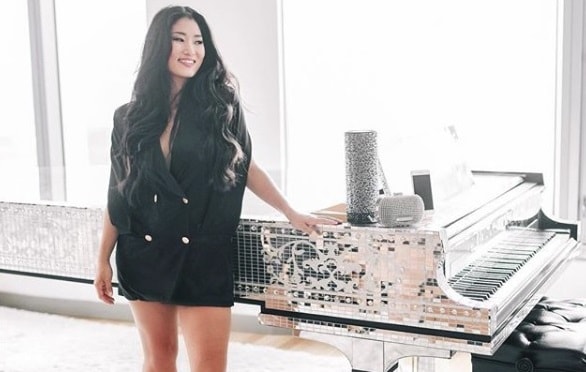 The Classical pianist stole the show when she teamed up with American rapper Cardi B at the recent Grammy Awards Ceremony.

Sony Music Masterworks have announced the exclusive signing of one of today’s most exciting and innovative artists, the internationally acclaimed American pianist, composer, producer, fashion influencer and activist, Chloe Flower.

Fresh from lighting up the 61st Grammy Awards in LA on February 10th - alongside Grammy Award-winning rapper Cardi B - the NYC-based pianist will also be releasing brand-new music later in 2019 as part of this exciting new deal.

Chloe Flower performs with Cardi B at the 61st Grammy Awards

Celine Dion, Nas and Babyface are just three of the many legendary artists she has worked with during her career.

As well as being the brilliant virtuoso pianist she is, she's also highly respected for her ground-breaking work in the fight against human trafficking and sex slavery. She has partnered with organisations such as UNODC (United Nations Office on Drugs & Crime) and CAST (Coalition to Abolish Slavery and Trafficking). Chloe has spoken out on these issues at leading world events, including alongside former UN Secretary-General, Ban Ki Moon and best-selling author, Deepak Chopra.

Of this exciting new chapter in her career, Chloe says, "It’s not only an honour to be part of the Sony family, but I couldn’t be more excited about the incredible team I’ll be working with. I waited many years to find the right home for my music & my sound, and it was certainly worth the wait!“

Sarah Thwaites, Label Head UK, Sony Music Masterworks added: “Chloe Flower is one of the most exciting artists on the planet and I’m unbelievably stoked to share her talent with the world. Whether it’s original compositions, classical masterpieces, unexpected collaborations or virtuosic covers of today’s hottest hits, Chloe’s incredible talent, passion and style shine through.“