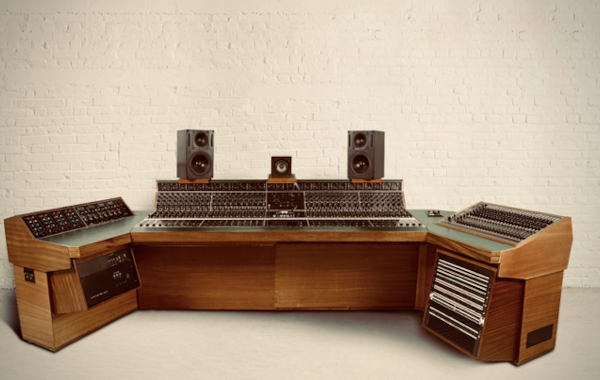 On 11 December, Bonhams Entertainment Memorabilia Sale will take place and offer an incredible array of important Rock, Pop and Film memorabilia. One of the highlights is the unique HeliosCentric Helios Console which is an amalgamation of two recording consoles used by some of the best-loved artists of the last 50 years.

The ‘super console’ was constructed by Elvis Costello and Chris Difford (from the band Squeeze) in 1996 after consultation with Dick Swettenham, a former employee of Abbey Road and Olympic Studios. They used part of the Island Records Basing Street Studio 2 Helios Console (1970-1974) and part of Alvin Lee's Helios console from Space Studios (1973-1979).

The two consoles were combined in 1996 after Difford and Costello acquired both from storage in order to set up their own studio HeliosCentric Studios ‘which would be for everyone to use – a chapel of music in a quiet spot.’ They sought advice from the original creator of Helios, Dick Swettenham, and carefully amalgamated the pair to create what is arguably one of Swettenham’s first, last, and largest project.

The newly combined console was installed on a peaceful farm in Rye that became a haven for musical artists and has been in constant use ever since. Artists who have used the console in both their original and amalgamated guises include: Led Zeppelin, Bob Marley & The Wailers, Eric Clapton, The Rolling Stones, George Harrison, Jeff Beck, Stephen Stills, Jimi Hendrix, Mott The Hoople, Cat Stevens, Free, KT Tunstall, Athlete, Paolo Nutini, Sia, Olly Murrs, Dido, Pet Shop Boys, Scouting For Girls, David Bowie, Paul Weller, Mud, Gary Barlow, Supergrass and Keane.

Department Specialist Claire Tole-Moir comments: ‘It is hard to overestimate how crucial a role this console has played in the British rock and pop scene. It is entirely unique, being an amalgamation of two already incredibly influential and important consoles, and in its current form has hosted some of the most popular bands of recent years. Songs and albums recorded on this bespoke console and its original parts rank among some of the most recognisable and best-loved pieces of music in existence and have resulted in Grammys, Brit Awards and multiple number one spots. This console is a piece of Britain’s modern cultural history.’