The world’s first amphitheatre made entirely out of upcycled pianos is to be resident at Edinburgh’s historic Leith Theatre this month, presenting a 'Resonancy' of events which will invite audiences to experience the unique interactive sculptural installation within the cultural gem of the capital’s most creative district.

Pianodrome is the vision of its creators Tim Vincent-Smith and Matt Wright, members of Leith based new music ensemble S!nk who, with the help of hundreds of volunteers, performers and donors have created their very own dream venue which was unveiled to critical acclaim at the Royal Botanic Gardens Edinburgh in August 2018 before travelling downtown to Pitt Street Market, Leith for the 2019 Edinburgh Festival Fringe.

A circular 100-seater amphitheatre made entirely – down to the flathead screws – out of upcycled pianos, Pianodrome is a one-of-a-kind artwork and performance space which can’t be seen or experienced anywhere else in the world. From today Tuesday 12 Nov to Sunday 8 Dec the magisterial main auditorium of local cultural grandee Leith Theatre will play host to this locally built and genuinely unique interactive sculptural installation. 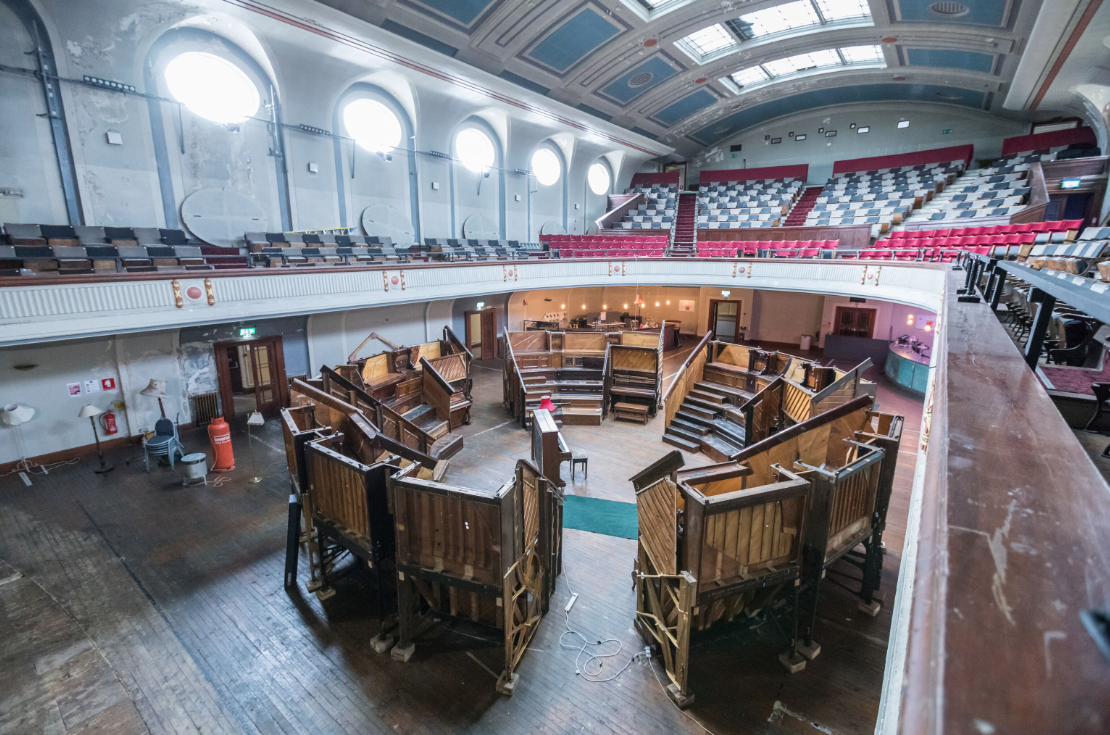 The Pianodrome, in all its panoramic wood and iron glory, will stand on the boards in the stalls under the skylights of Leith Theatre for a month of 'Resonancy' during which local community groups, artists, musicians, performers and members of the general public of all ages and interests are warmly invited to come and play in the interactive sculpture. In its own theatre within a theatre audiences will be invited to explore resonances between Pianodrome and Leith Theatre under themes of architecture, stories, sounds and community.

Pianodrome will be open to the general public to play on, in and around in the afternoons from 1-5pm every Tuesday, Wednesday, Thursday and Friday throughout the 'Resonancy' free of charge. At 4pm each day there will a performance as part of a 'Resonancy Platform' series where an array of artists and performers will present new work across a broad spectrum of the arts. A collection will be taken towards installation costs before close at 5pm. In addition to the free programme, a number of ticketed events will take place throughout the month including performances from the Hebrides Ensemble (12 Nov), LeithLate (16 Nov) and Oi Musica! (17 Nov).

The residency will culminate with 'RESONATOR'; a five day fundraiser festival of music, movement and magic featuring the sounds and tastes of the Balkans as presented by Balkanarama, a showcase of Edinburgh's best up and coming musical talent from Unorthodox Events and pop-up performances from local community choirs before alternative youth ensemble Tinderbox Orchestra closes the festival on 8 December. RESONATOR will also present the launch of the latest EP from the creative masterminds behind Pianodrome, S!nk.

For further information and to buy tickets, visit pianodrome.org