12 hours of playing from some 20 of the world's leading pianists! 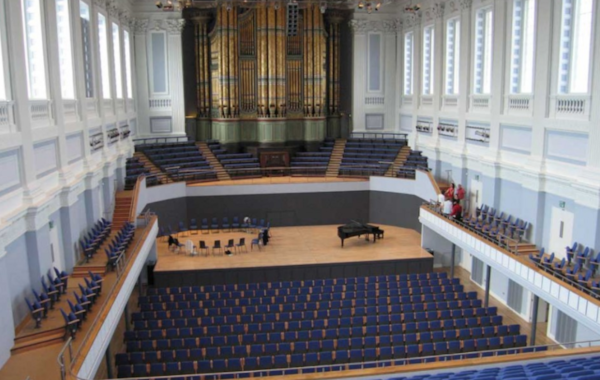 A Night of International Ambition – hosted in Birmingham

A 12-hour through-the-night voyage of discovery featuring over 20 pianists! With appearances by:

Mystery Guest and many more

Olympianist Anthony Hewitt (pictured) cycles through the night, live-streamed to the foyer

Inspired by the all-night jazz sessions at Birmingham’s Town Hall in the 1950s and 60s, Birmingham Conservatoire has put together a nocturnal pianothon of epic proportions featuring some of today’s greatest pianists, superb guest artists and supremely talented students.

The 12-hour through-the-night voyage of discovery takes place at Town Hall Birmingham on Friday 3 March, 7.30pm and features over twenty pianists including guest artists Gergely Bogányi, Simon Callow, Alistair McGowan, Peter Donohoe, Mark Bebbington and Dr Anna Scott. A mystery guest of international stature plays Beethoven’s last three sonatas, and The Olympianist, Anthony Hewitt, bicycles through the night from his London home (with pictures screened live in the foyer), arrives at dawn and plays Ravel’s Gaspard de la nuit.  As Anthony Hewitt says, “Playing Ravel’s wonderfully descriptive Gaspard de la nuit poses pianistic challenges at the best of times, let alone at 7am after having cycled 125 miles through the winter night!! But I think I can do it, with the right ‘cyclogical’ approach!”

The evening begins with the award-winning Hungarian pianist Gergely Bogányi playing the complete Chopin Nocturnes and other highlights include Beethoven’s three last piano sonatas performed by the Mystery Guest, Messiaen’s The Garden Warbler from Peter Donohoe and John Ireland’s Sarnia from Mark Bebbington. Impressionist and amateur pianist Alistair McGowan - whose rekindled love of the piano is an inspiration for anyone who learned as a youngster to start playing again – will play music by Satie and Grieg.  In the early hours, celebrated actor Simon Callow gives a rare performance of Tennyson’s epic narrative poem Enoch Arden, in a setting for narrator and piano by Richard Strauss, with pianist John Thwaites.  Dr Anna Scott takes a look at  ‘Brahms as he might have heard it’, student Nafis Umerkulova plays Schumann’s First Piano Sonata on a historic instrument made by Clara Schumann’s cousin W Wieck, and prize-winning pianists and tutors from the Conservatoire’s own ranks are showcased throughout.

Head of Keyboard Studies at Birmingham Conservatoire, John Thwaites says, “I wanted to put together something that was shocking in its audacity, youthful in its exuberance and, in its totality, offering the finest night of piano playing anywhere on the planet this year! The inspiration for an All-Nighter comes from the Swinging Sixties, when Birmingham Town Hall regularly hosted All-Night Jazz Festival gigs, pictures of which still adorn the lower bar. These sessions were filled with young people and students and, to encourage them, tickets for our All-Nighter start at just £1.”

This unique event will have three Steinway concert grands, period pianos and harpsichords. Bar and catering all night!

Piano-playing means Chopin and all-nighters need Nocturnes.  The complete Chopin Nocturnes are played by Gergely Bogányi, winner of the 1996 Franz Liszt Competition in Budapest and one of the most exceptional pianists of our times.

Peter Donohoe gave the British Premiere of Messiaen’s La Fauvette des Jardins in 1977 having studied it with the composer and his wife in their Montmartre apartment.  The panoramic ‘day in the life’ of a garden warbler seemed fitting for this event and Peter is joined by his wife Elaine, who he met for the first time at that first performance.

Audiences are guaranteed to be knocked sideways when the Mystery Guest steps on stage to play Beethoven’s last three Sonatas.

In the early hours, we add poetry to the mix, welcoming the celebrated actor Simon Callow in a recitation of the Victorian melodrama Enoch Arden by Alfred Tennyson in a setting by Strauss for narrator and piano, with pianist John Thwaites. Callow’s lifelong passion for classical music has included producing opera and performing with orchestras around the world and makes him the perfect casting for this monumental work which has echoes of Robinson Crusoe and Ulysses.  This is followed by the Birmingham premiere of Rzewski’s De Profundis (after Oscar Wilde) for speaking pianist.

Prize-winning pianists from the Conservatoire’s own ranks are showcased throughout, presenting some of the greatest masterpieces for the instrument.  Domonkos Csabay, who won the 2016 Brant International Piano Competition, plays Schubert’s last great Sonata in B flat D960. Lauren Zhang, a Birmingham Juniors student who won the 2016 Ettlingen International Competition for Young Pianists, plays a Transcendental Study by Lyapunov, and Róza Bene, who was joint winner of the 2016 Anthony Lewis Memorial Competition, plays Couperin.

Birmingham is increasingly a centre for historically-informed performance practice and in this context Dr Anna Scott will perform late Brahms as the composer himself might have heard it played.  It's more than a little thought-provoking, so prepare to be scandalised, and to further enjoy the playing of Gyorgy Hodozso, a Weingarten Scholar in Birmingham and Dr Scott's latest prodigy.  There’s also a chance to hear Schumann’s Piano Sonata No 1 in F sharp minor, played by Nafis Umerkulova on a piano made by Clara Schumann’s cousin, W Wieck.

Mark Bebbington is particularly celebrated for his interpretations of British music.  He’ll play Sarnia by John Ireland, the British composer who has left the single greatest body of solo piano music.

Finally we welcome impressionist and amateur pianist Alistair McGowan whose rekindled love of the piano is an inspiration for anyone who learned as a youngster to start playing again.  He’ll play Satie (a composer whose life and work he has studied in detail) and Grieg before introducing his good friend, ‘The Olympianist’ Anthony Hewitt, who will cycle through the night from his London home to play Ravel’s masterpiece of nocturnal virtuoso pianism Gaspard de la Nuit.

After that, only the magnificent organ of the Town Hall can provide a fitting close: Messiaen’s Dieu Parmi Nous.