Emanuel Ax, Yo-Yo Ma and Leonidas Kavakos are to release the second of three Beethoven albums together later this Autumn. The second instalment of 'Beethoven for Three' will be available from 11 November via Sony Classical.

Written in Vienna when Beethoven was 25 years old, with his first symphony still five years away, Op 1 No 3 captures his transition from a virtuoso pianist to a composer in his own right. In contrast, Symphony No 6 features Beethoven in his prime, making space for something more lyrical and cinematic between the obsessiveness of Symphonies Nos 5 and 7. 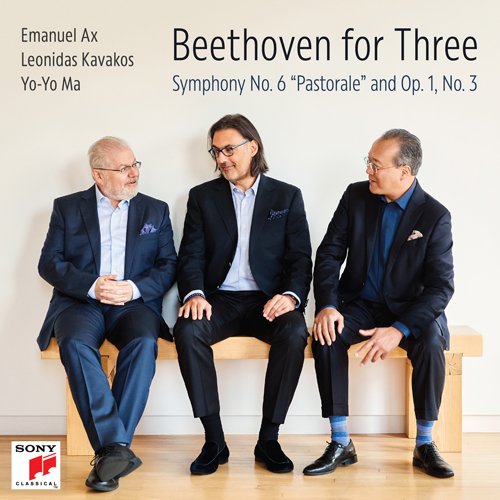 The album is available to pre-order here

“We all feel that being able to participate in a symphony is such a wonderful thing to do,” says Yo-Yo Ma. “One of the things that has separated people since recording began is the categories that we put people in, in which chamber musicians, orchestra players, people who play concertos, people who do transcriptions, people who compose, people who conduct, are all viewed as separate categories with no overlap. That siloed thinking discourages actual creativity and collaboration between people. And so we feel that one of the things that is really important to do today is to actually go back to the first principles of music, the simple interaction between friends who want to do something together.”

This project isn't the first time the trio have worked together. Ax, Kavakos, and Ma first performed together as a trio at the 2014 Tanglewood Festival, playing a programme of Brahms's piano trios. Their first recording effort, 'Brahms: The Piano Trios', was released in 2017 to universal critical acclaim; Gramophone observed that "These performances get straight to the heart of Brahms’s music, relishing its pull of opposites," while Limelight noted, "There’s no doubting the ardour that these players bring to the music, which is delivered with an eye to creating broad, sweeping phrases … there are plenty of opportunities to swoon along the way.”

The first track from the new album, the Op 1 No 3, is already available to stream below.