The Swedish pianist's second album features a large selection of piano works by Alexey Stanchinsky (1888–1914), one of the most talented Russian composers of the early 20th Century

Stanchinsky was not only a talent but a genuine innovator who, despite his early death, had a profound influence on the generation of composers to follow. Peter Jablonski is the perfect interpreter for these magnificent gems.

Although often described as ‘experimental’, in some sense Stanchinsky’s music continues Scriabin’s musical ideas. It was only through the first publication of Stanchinsky’s complete works in 1990 that the musical world finally became aware of his high standing in the world of Russian piano music.

Relatively little is known of his life - even his death raises many questions - and no biography has ever been written about him. Most of his works were published only after his death and many of his works were either lost or destroyed. Following Stalin’s purges, Stanchinsky’s works were banned. 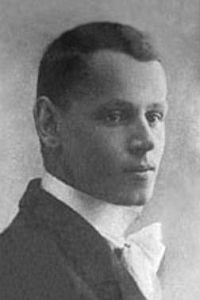 Alexey Stanchinsky died at the young age of 26

Many of the early works on this album are connected to Stanchinsky’s studies with Taneyev who instantly noticed the gifts of his young pupil. Taneyev, in turn, had great influence on Stanchinsky’s works as his mentor. In 1910, Stanchinsky’s health began to decline following a series of tragic events in his personal life.

This, however, did not stop the composer from writing new music. Myaskovsky described the composer’s late pieces thus, that "everything in these pieces is unique". Indeed, these late miniatures are filled with rhythm, unusual metre, fresh, subtle, rich harmonies, imaginative and refined compositional style, and beautifully clear texture. Sadly, Stanchinsky passed away only a few months after his successful piano recital in 1914 at the Moscow Conservatory.

He has performed and recorded the complete piano concertos by Beethoven, Tchaikovsky, Rachmaninoff, and Bartók and all of the piano sonatas by Prokofiev.  During his three-decade-long career, he worked closely with composers Witold Lutosławski and Arvo Pärt.  Jablonski’s extensive discography includes several award-winning recordings.

The album will be released in March 2021, one year after lockdown began.  During these difficult and uncertain months, many people may have experienced poor mental health at times, just as Stanchinsky did during his lifetime.

In honour of Stanchinsky's memory, Peter Jablonski has partnered with Samaritans and will make a personal donation to assist their work.  The official message from Samaritans is: When life is difficult, Samaritans are here – day or night, 365 days a year. You can call them for free on 116 123, or visit www.samaritans.org.