'Beyond Dreams and Aspirations: My journey to Oxford' is out on 11 February 2022

Conductor and pianist Marios Papadopoulos has released a new memoir about his life.

In 'Beyond Dreams and Aspirations', Papadopoulos opens up on his path to becoming Founder and Music Director of the Oxford Philharmonic Orchestra, the Orchestra in Residence at the University of Oxford, and he shares insights into his encounters with the greatest musicians of the day and into the art of piano-playing and conducting. 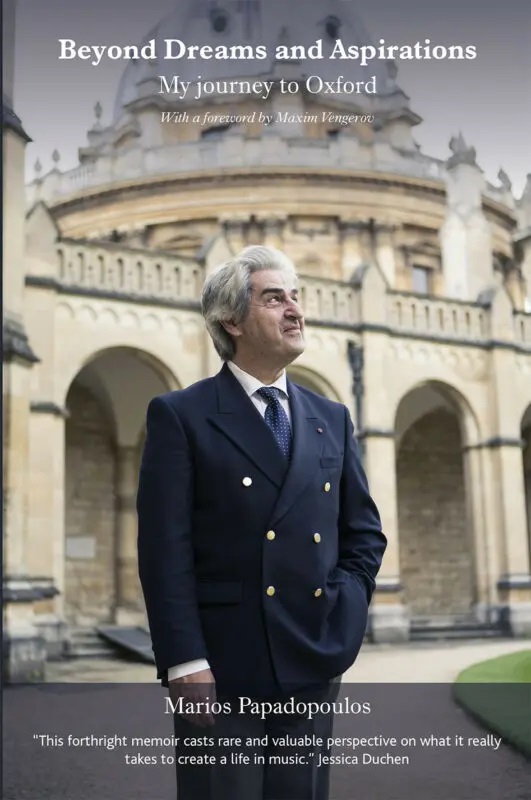 'Beyond Dreams and Aspirations: My journey to Oxford' will be out on 11 February

Papadopoulos first came to Britain as a gifted child from Cyprus in the 1960s. His family made great sacrifices in moving to the UK to give him a better musical education under early mentors such as Gina Bachauer, who had studied with Cortot and Rachmaninoff, Ilona Kabos. Soon, his 1974 recital at London’s Queen Elizabeth Hall was described by The Times as an ‘astonishing debut’.

The book chronicles his early career as a pianist including his friendships and encounters with leading figures such as Shura Cherkassky, Dame Fanny Waterman, Vladimir Ashkenazy, Daniel Barenboim, Sir Michael Tippett and Sir William Walton, along with a candid account of the ferocious challenges faced by concert pianists.

'Beyond Dreams and Aspirations' will be launched at London’s Oxford & Cambridge Club on Friday 11 February 2022, presented by Jessica Duchen. Full details of the book can be found here.