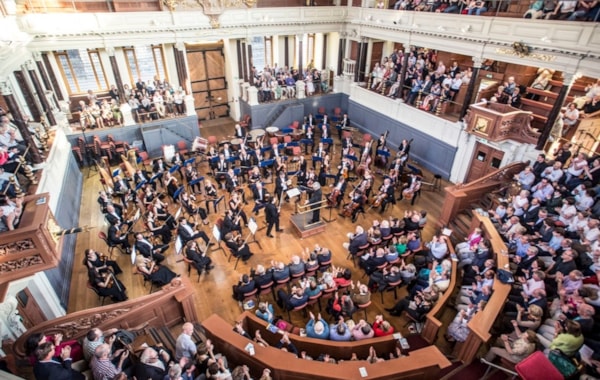 The Oxford Philharmonic Orchestra has received a grant of £102,958 from the Government's £1.57 billion Culture Recovery Fund to help the organisation recover and reopen.

More than £300 million has been awarded to thousands of cultural organisations across the country including Oxford Philharmonic Orchestra in the latest round of support from the Culture Recovery Fund, the Culture Secretary announced last week.

This grant is an essential lifeline for the Orchestra, guaranteeing its future and extending its ability to offer work and employment to its musicians. Funds will go towards a celebration of UN World Environment Day on Saturday 5 June with a 'Pastoral for the Planet' concert, part of a four-part concert series, which will include two programmes dedicated to investigating the relationship between Mozart and his contemporary Joseph Bologne, Chevalier de Saint-Georges.

This injection of funds will also enable the Orchestra to put into motion its plans to increase engagement with the local Oxford community, offering education opportunities for all school-aged children, and projects which focus on providing access to harder to reach communities. Plans include:

Through the first round of funding from the Cultural Recovery Fund, the Oxford Philharmonic created a series of four Winter concerts, starring Sheku Kanneh-Mason, Yuri Zhislin, and Charlotte Scott, streamed free to audiences worldwide and broadcast as part of special 2-hour feature on Classic FM radio.

Over £800 million in grants and loans has already been awarded to support almost 3,800 cinemas, performance venues, museums, heritage sites and other cultural organisations dealing with the immediate challenges of the coronavirus pandemic.

Marios Papadopoulos, Founder and Music Director of the Oxford Philharmonic Orchestra, said: "We are honoured that HM Government and the Arts Council have once again recognised our contribution to the arts and provided us with a vital grant to allow us to continue our work as the industry recovers from this third lockdown. This funding will allow us to film more concerts and realise some of our most ambitious community plans yet, with education provisions for all ages."