British pianist Sarah Nicolls is in the process of developing the new design and has launched a crowdfunding campaign to help with costs.

Meet the Standing Grand (the clue is in the title!).

Modelled on a combination of grand and upright, the new design aims to be light and compact enough to bring the fullness of a grand piano’s sound into modern spaces.

Drastically reducing the weight of the instrument is a big feature of the Standing Grand. Whilst a standard grand piano weighs around 450kg, the Standing Grand will weigh around 82kg, making it so much easier to shift around your home. 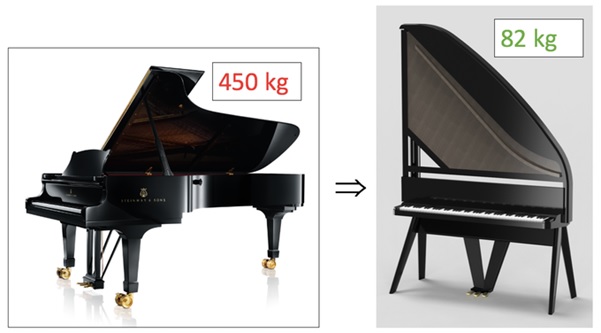 Pianist Sarah Nicolls is attempting to raise £40,000 for the project through her crowdfunding campaign. With this crowd-fund money, the Future Piano team (led by Sarah and comprising aerospace engineers and a piano builder) are aiming to reduce the weight using a combination of traditional (metal and wood) and advanced materials (composites) for the optimum sound, cost and weight ratio.

Where did the idea come from?

Back in 2007, Sarah was performing new classical piano music around the world. Increasingly, composers were asking her to play ‘inside’ the piano: to pluck strings, find harmonics, strum or knock. The sounds were extraordinary but they were uncomfortable to perform and invisible to the audience; “It’s like watching a mechanic go under the bonnet”, remarked one. She decided it was time to reinvent her instrument. 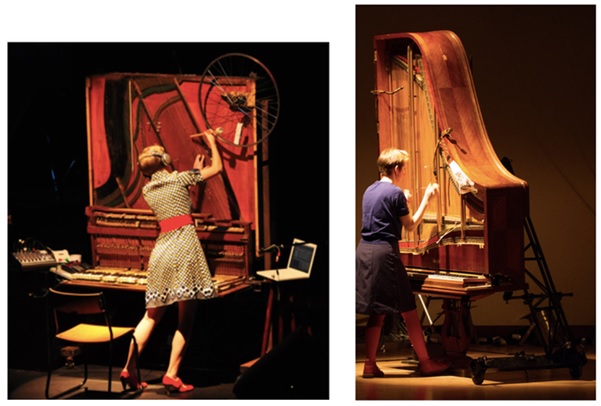 She designed a piano where the strings went vertically up from the keys and made a rough prototype in 2008 by spinning the strings of an upright piano through 180 degrees. So in 2014 she commissioned a better version, this time from a straight strung, under-damped 1900 Erard grand piano – with a new action designed and built by Pierre Malbos. The new version overcame the problems of the first, it’s a sonic revelation and Sarah has been composing and performing with it ever since.

She began to discover new benefits of her design, such as children being able to see the hammers move as they play. She now wants to enable future generations of pianists to play real, strung pianos by reducing the logistical impact of the piano.

If you would like to support Sarah on her mission to create the Standing Grand, you can donate here.