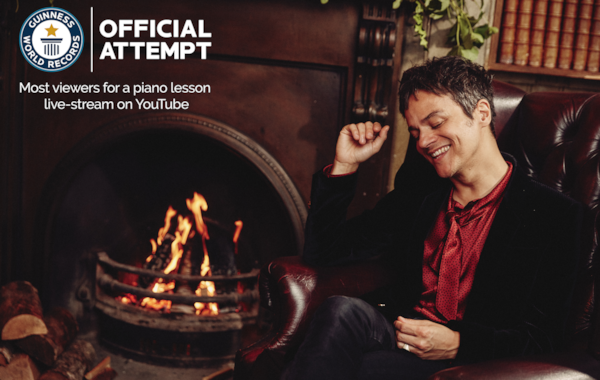 Jamie Cullum is in the mood to lift spirits this Christmas.

On 9 December at 2pm GMT, the multi-instrumentalist will attempt to break the Guinness World Record for the largest music lesson ever held.

Along with special guests, he will be teaching those who tune in how to play the Christmas classic, ‘In The Bleak Midwinter’. The music lesson will be in association with Bonza, a new generation resource for music in schools, supporting teachers and learners alike and led by some of the world’s best known artists.

Jamie comments, “I’ve seen so many imaginative ways of creating a spirit of togetherness from the artistic community this year, in spite of how physically apart we’ve actually been.  I’m passionate about how music and the participation of making it can form such powerful bridges between people.

With that in mind, I will be holding a virtual music lesson on the 9th of December to teach people how to play a Christmas carol on the piano. Schools across the UK will be getting involved but the lesson is open to absolutely everyone and together we’re going to attempt to break the world record for the largest music lesson ever held!

So if you want be part of a special Christmas moment and be part of breaking a world record, join me on Dec 9th at 2pm. You can head to thepianomanatchristmas.com to sign up and receive all of the information.”

Cullum has also recently released a brand-new album, The Pianoman at Christmas.

The album, released via Island Records, features ten original songs played by 57 of Britain's best musicians. The album was recorded in Abbey Road's famous Studio 2 and is produced by Greg Wells, whose The Greatest Showman soundtrack spent 28 weeks at number 1.

You can stream the album below.