Hundreds of classical concerts cancelled due to coronavirus 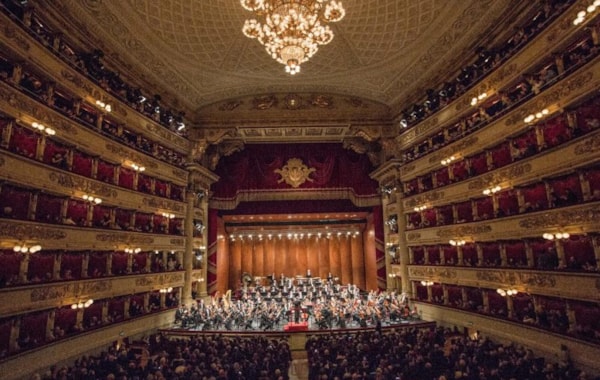 The Barbican closes until further notice

"The Barbican is temporarily closed until further notice due to new UK Government advice on Coronavirus/Covid-19. The safety of our staff and audiences is our most important consideration, so we’ve taken the decision to fully close the building during this period.

We’re sorry to the artists and audiences affected and recognise the significant impact that this closure will have on all those we work with or that are due to attend our events.

Please keep checking this page for the latest information on refunds for cancelled events. As we’re having to cancel or postpone a large number of events, please be patient with us and try to avoid contacting our box office at this stage and we’ll be providing full information as soon as we can.

The Barbican relies on box office income and donations to deliver our programme, pay staff and artists and to run our building. The current situation presents a very significant financial challenge to us, alongside the artists and organisations we work with, so, if you’re able, please consider making a donation to help support our future work.

"Due to growing concern surrounding the Covid-19 outbreak, the College has made the decision to close until further notice.

Thanks to technology many of us will still be teaching, learning and working from home so you can still contact us via email. Please note that it may take longer than usual to return phone calls and any donations made by post may take a little longer to be acknowledged. You can still donate using the online form.

We hope to be back in the building again very soon, surrounded by the people and music that makes the RNCM such a special place."

"Consequent on a general decree issued by the Hessian Ministry for Social Affairs and Integration, it is no longer possible to hold the ‘Musikmesse Plaza’ (3 and 4 April) or any concerts of the ‘Musikmesse Festival’ (31 March to 4 April) with over 1,000 visitors.

As it cannot be expected that the situation will change soon enough to schedule an adequate catch-up event, the organisers announce that the international trade show Musikmesse will not take place in 2020."

Following the guidance of Governor Gretchen Whitmer’s office, which has declared a state of emergency in Michigan, Gilmore Director Pierre van der Westhuizen today announced that the 2020 Gilmore International Keyboard Festival has been cancelled, in order to help contain the spread of COVID-19. The festival had been scheduled to take place April 22 – May 10, 2020, and the April 15 pre-festival performance by pianist Evgeny Kissin and soprano Renée Fleming has also been cancelled.

The Orchestra today expressed deep disappointment at having to cancel its seven-date European tour to Luxembourg, Germany and Austria between 13 and 19 March due to the measures being taken in all the cities on the tour to limit the spread of COVID-19.

Following the decision of Polish Government’s coronavirus crisis management team to temporarily cancel all public cultural events, The Chopin Institute has decided to move the preliminary round of the 18th Chopin Competition from April to September.
The new schedule of the preliminary round (originally planned for April, 17-28) will be published soon.

Yuja Wang's European tour has been cancelled. She posted the following on her Facebook page:

This includes her 31 March concert at London's Barbican Hall. Barbican have released the following statement:

'We’re sorry to announce that Yuja Wang has cancelled her European recital tour, which included a concert at the Barbican on 31 March.

Six of her concerts had been cancelled by venues in mainland Europe in response to restrictions brought in by Governments relating to COVID-19, making it impossible for her to continue the tour. Ticketholders will receive a full refund, and Yuja Wang and the Barbican will work to reschedule the concert in the future.'

A whole host of concerts in Japan, Switzerland, France, Italy and the USA have been called off in an attempt to prevent the spread of the coronavirus.

COVID-19, which originated in Wuhan, China at the end of 2019, has severely disrupted the classical music industry.

Italy appears to have been hit the hardest outside of China. The country was put on complete lockdown on 9 March. All events taking place in the country have been suspended indefinitely.

The latest bulk of cancellations comes from Paris, France, where the French Government announced early on March 9 that all events for more than 1,000 people are to be called off. The affected events in the short term include an Orchestre de Paris concert on 11 & 12 March, the visit of the City of Birmingham Symphony Orchestra on 20 March, and Yuja Wang's highly anticipated performance on 17 March.

There is no news as to whether these events will be rescheduled.

There is positive news, however from London, where the Guildhall School of Music & Drama in London has reopened. The school was initially closed on March 3 after a teacher tested positive for the virus.

This page will continue to be updated as more news comes through.