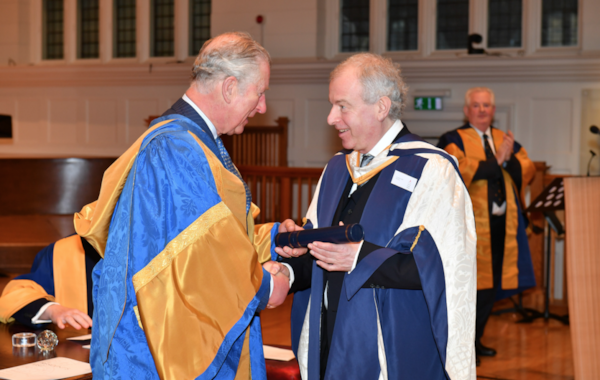 Today, 14 March, at the Royal College of Music, London

Marking 25 years as President of the Royal College of Music (RCM), HRH The Prince of Wales today honoured some of those who have made important contributions to music in a ceremony at the conservatoire’s South Kensington home.

We were delighted to see that pianists featured prominently!

Celebrated pianist Sir András Schiff was awarded an Honorary Doctorate having given several masterclasses at the RCM in recent years. Sir András has worked with most major international orchestras and conductors and won numerous international honours. In 1999 he founded the Cappella Andrea Barca orchestra which brought together some of the finest musicians from around the world.

Sir András appeared on the cover of Pianist issue 76 a few years back.

British pianist Nicholas McCarthy (beaming below with HRH The Prince of Wales) was made an HonRCM, having enjoyed a flourishing career since becoming the first one-handed pianist to graduate from the RCM in 2012. Nicholas told us: ‘I am delighted to be recognised as an honorary member of the Royal College of Music. I hope this recognition will serve as a positive example for other disabled musicians and help me in my continuing campaign to get more disabled musicians into the arts.’

One of UK radio’s most beloved personalities Sean Rafferty MBE was made an HonRCM. Sean has been presenting BBC Radio 3’s flagship musical programme, In Tune, for 20 years. He has been chairman of Opera Theatre Company, Dublin, which tours all over the world and is currently patron of Northern Ireland Opera and Belfast Music Society.

Pioneering genetic scientist Professor Lord Winston, who has led important breakthroughs in IVF treatment, was made a Fellow of the RCM (FRCM). A lover of music, Lord Winston was Chairman of the RCM for ten years and recently made Vice President of the College by HRH The Prince of Wales.

Victoria, Lady Robey OBE, founder of the charity London Music Masters – which works to ensure that every child has access to extraordinary music – and member of the RCM Council from 2007–2017 was also honoured.

HRH The Prince of Wales heard the RCM’s new organ for the first time during today’s ceremony. The organ, designed and built by Flentrop Orgelbouw as part of the College’s transformative More Music development, is an exceptional facility for RCM students. HRH The Prince of Wales heard RCM alumnus Sir Hubert Parry’s Chorale Prelude on ‘St. Ann’s’ performed on the new organ by RCM professor in charge of organ, David Graham. Fourth year RCM organist Laurence Long further demonstrated the versatility of the new instrument with a performance of Wachet auf, ruft uns die Stimme (BWV 645) by J S Bach.

The concert also featured performances from exceptional recent graduates: recorder player and Queen Elizabeth Rose Bowl recipient Katie Cowling, bass-baritone Julien Van Mallaerts and violist Bryony Gibson-Cornish, both of whom received prestigious Tragore Gold Medals upon graduating. Composer and pianist Eduardo Andrade, an RCM scholar who has scored 25 projects internationally in the past two years, was the recipient of the President’s Award. As a pianist Eduardo has been a soloist in his native Mexico and will have his British debut at Cadogan Hall in May 2018. Julien Van Mallaerts won first prize at the 2017 Wigmore Hall/Kohn Foundation International Song Competition and first prize in the 2017 Kathleen Ferrier Award. He is soon to make his debut with the Royal Ballet at the Barbican.

Professor Colin Lawson CBE, Director of the Royal College of Music, said: ‘The annual visit by our President, HRH The Prince of Wales, is a highlight of the Royal College of Music calendar. I am delighted to welcome him in this anniversary year to hear the magnificent new organ and honour the individuals who have made important contributions to the RCM and wider musical community.’

In 25 years as President of the Royal College of Music, HRH The Prince of Wales has honoured some of the music industry’s most eminent figures. Internationally renowned performers Vladimir Ashkenazy, Dame Kiri Te Kanawa and Lang Lang have received Honorary Doctorates, along with composers Andrew Lloyd Webber and Steve Reich. Violinist Nicola Benedetti, conductor John Wilson and songwriter and keyboardist Rick Wakeman have all been honoured with Fellowships.

The RCM organ is named in recognition of James Zheng Huang HonRCM.