The original composition, entitled Hope, is a reflection on everything the National Aids Trust has achieved and what it continues to do. Its aim is to offer hope to anyone affected by HIV and AIDS.

Daniel has entertained and delighted audiences around the globe, performing for the world's most prestigious cruise lines such as CUNARD, P&O Cruises UK, and Fred Olsen Cruise Lines.

He is also a prize-winning graduate from the Colchester Institute.

As well as performing around the globe, the British pianist is a guest contributor for Pianist Online, and is a friend of the Tony Fisher Show on BBC Essex; chatting all things classical music and travel. He is also helping to bring the very best of classical music to Essex with his role as Classical Representative for the Harwich Festival.

Of his charity single, Daniel says, 'I want people to listen to "Hope" and be inspired in both supporting the work the charity NAT carry out, as well as using it to provide comfort, hope and support, and to remind sufferers they are not alone.' 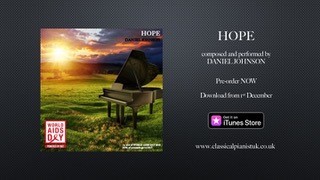 The single is now available to pre-order. It will officially be released on 1st December with 50% of proceeds going directly to charity.