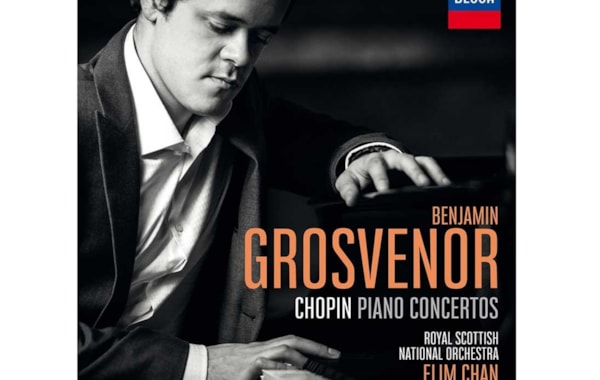 The record marks Benjamin’s fifth album on Decca Classics, following the hugely successful Homages in 2016, and is his first orchestral album since 2012.

These works have been an active part of Grosvenor’s repertoire since his early teens. He explains: “Chopin was the first composer to whom I felt a strong connection with as a child. I have always been drawn to his music, and his piano concertos are among some of the finest in the repertoire.”

Of the new recording, which came to fruition following a successful performance of the Piano Concerto No.2 with Elim Chan and the RSNO in 2018, Benjamin notes: “I am delighted to have the opportunity to collaborate with Elim and the outstanding musicians of the RSNO.” In spring 2020 Benjamin will appear in the USA, Europe and the UK performing the Piano Concerto No.1.

Chopin’s Piano Concerto No.2, Op.21, written in 1829, and Piano Concerto No.1, Op.11 completed the following year, were written before the composer had turned 21, and before he left his native Poland. The F minor Concerto (No.2) offers echoes of the concertos of Hummel, Moscheles, Kalkbrenner and Field. The work’s first public performance on 21st March 1830 was a moderate success – Chopin’s piano was too soft-toned and could hardly be heard over the assembled instrumentalists. The second performance a day later, performed on a more aggressive Viennese instrument, was a triumph.

“An electric current sizzles in this pianist’s fingertips... A wizard of the piano” – Financial Times

Winner of the Keyboard Final of the 2004 BBC Young Musician Competition at the age of eleven, Benjamin Grosvenor is now an internationally regarded. A BBC New Generation Artist from 2010-2012 Benjamin has performed at the BBC Proms on a number of occasions and in 2015 starred at the Last Night. Signed to Decca Classics, the youngest British musician to do so, his recordings have received numerous awards and in October 2016 he was announced as the inaugural recipient of the Ronny and Lawrence Ackman Classical Piano Prize at the New York Philharmonic.

The recording will be released on 21 February 2020.