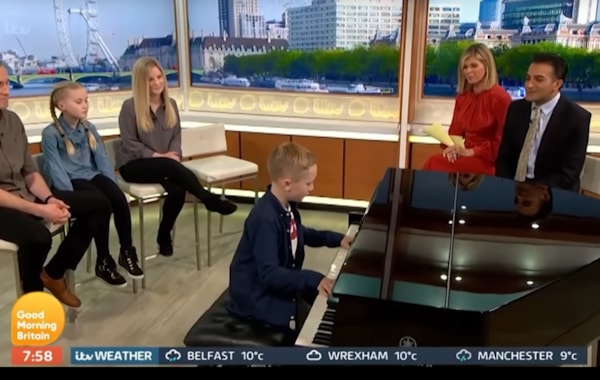 Want to improve your piano playing? Try Pianist Magazine for FREE by downloading our sample issue

Meet Harrison Crane; the piano player who, at just 12 years old, is already performing live on TV in front of millions of people.

Back in February, a video of Harrison performing a 90s Dance medley on a public piano in Liverpool went viral on YouTube. To date, the video has amassed over 2 million views.

Just a few weeks later, Harrison and his family found themselves sat on the sofa of the Good Morning Britain studios, talking about his video. Asked why he performs 90s music, he replied, ‘It’s the best kind of music out there. It’s just so fun and upbeat. My dad plays it in the car all the time.’

The viral video is playfully titled How to attract a crowd in 4 minutes. Over the course of the video, Harrison plays a medley of 90s dance hits as shoppers stop in their tracks, one by one. His medley included classics such as Child by Robert Miles, Blue by Eiffel 65 and Sandstorm by Darude.

How did he become so proficient at playing the piano at such a young age?

So how did Harrison develop his piano-playing skills?

Quite often, children learn the piano as a result of one or both of their parents knowing how to play.

Surprisingly, Harrison didn’t develop his interest in piano playing from either of his parents.

‘We don’t play music at all, really!” his father joked on Good Morning Britain.

‘Harrison has been playing since he was six years old. He learns by ear and sometimes from YouTube, and also by slowly going over sheet music then memorising it.’

A very impressive process for such a young player.

Harrison doesn’t seem fazed by the attention he receives when playing. ‘It’s really exciting when you have a big crowd around you. It’s amazing when you get the applause at the end.’

He sounds like a naturally gifted performer to us.

‘In the future, I’d like to go down the musical performing route’.