Diverse delights from a Turkish duo, plus glittering Gershwin – review by Peter Quantrill

Long based in Switzerland and France, Ufuk and Bahar Dördüncü have made their name as a duet partnership in new music, working with the likes of George Benjamin and Helmut Lachenmann, but the full range of their musical sympathies was on display in a beautifully programmed recital at this year’s Istanbul Music Festival.

The sisters still count themselves Turkish, and they received an affectionate reception from the audience at the Sureyya Opera House where, the night previously, Cyprien Katsaris and friends had held a four-piano party. While continuing the piano festival within a festival, the Dördüncüs offered an altogether more substantial menu, opening with Shostakovich’s Suite for Two Pianos Op.6. This is a teenage work of prodigal imagination, revealing if nothing else the young Shostakovich’s own extraordinary facility at the keyboard. The performance illuminated where he got his ideas from – how Bach and Chopin and Mussorgsky and even Rachmaninov are all absorbed within a hungry, magpie mind. Assured handling of the two Steinways that had taken quite a pummeling the previous evening meant that the brilliance of Shostakovich’s upper-register writing never became glaring, and opened out his intriguing use of a motto theme in all four movements which would return to poignant effect 60 years later in his last completed work, the Viola Sonata.

the Dördüncüs moved on to home soil, literally and figuratively, with the first performance of Now, a bold and technically challenging work by Zeynep Gedizlioglu. Very evidently written for the talents of the two sisters – the clarity of their articulation and untrammelled force of their attack – the piece explores different states of being in the present, contrasting split-second moments of purpose with pauses for suspense and indecision, leaving us to make connections between them. If that sounds like hard work, Gedizlioglu’s thought process proved both engaging and hardly impossible to follow, with the aid of idiomatic writing for the instruments and serial rows owing something to Webern and Boulez, though her harmonic language is her own, and the piece came to a conclusion both quirky and yet inevitable with the gradual injection of consonant fourths and fifths into its bloodstream.

After the interval, the sisters were joined on stage by the RIAS Chamber Choir of Berlin for the Liebeslieder Waltzes Op.52 by Brahms. While evidently enjoying themselves, as if on a musical holiday, and thus drawing the audience into Brahms’s world of domestic and good-natured music-making, they lavished loving care over every intricately voiced chord; excellent as the choir was, its presence seemed at times almost superfluous. 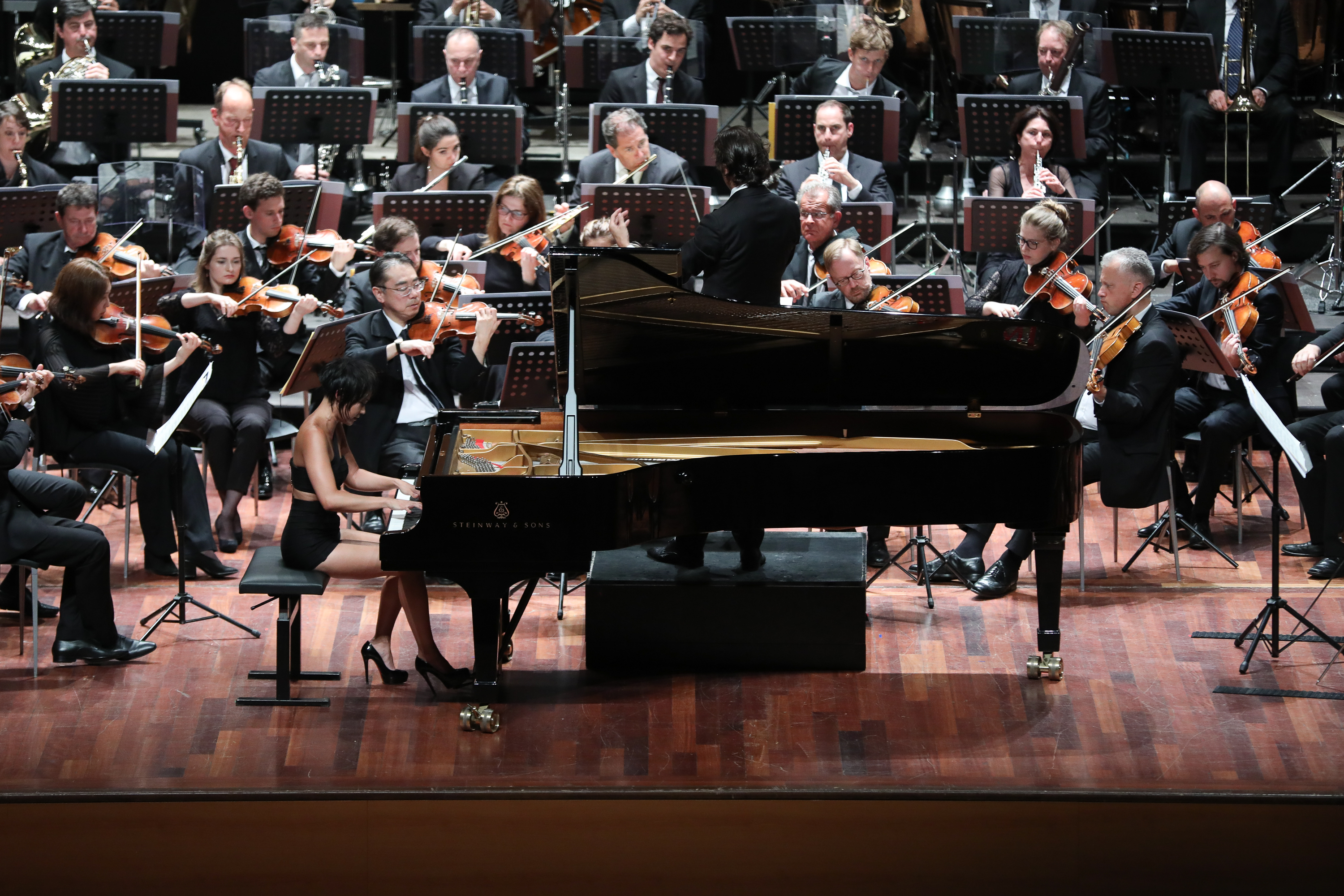 The seventh pianist in three nights at the festival swept into town with Gershwin and more Shostakovich on Saturday. Yuja Wang arrived with the Luxembourg Philharmonic and their gifted young Venezuelan music director, Gustavo Gimeno. He gave compelling shape to the more episodic stretches of Tchaikovsky’s fantasy-overture on The Tempest, and secured solid playing in the unsympathetic acoustic of a conference centre for the 1919 Suite from Stravinsky’s Firebird. Wang sprinkled her unique brand of glitter over the Rhapsody in Blue and Shostakovich’s Second Concerto, but something was missing – a sense of collaboration with the orchestra, and perhaps a sense of freshness and spontaneity in her own performance. Absorbed in her own world during each piece, and accomplishing extraordinary feats of legerdemain with a pair of encores, she nonetheless appeared ill at ease, though it would be only conjecture to speculate whether she was suffering a bad night – as we all do – or feeling the effects of a relentless touring schedule. Everything about her indicated the urgent need for a rest.