Why the extra keys? The Bösendorfer Imperial Grand Piano 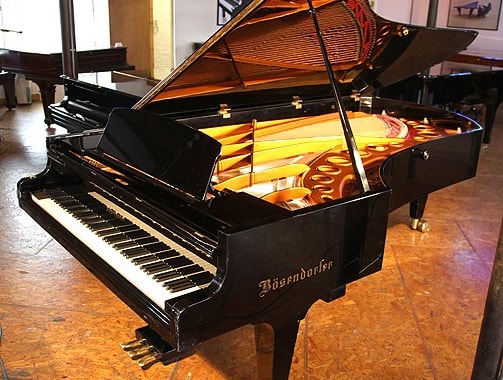 Alec Coles-Aldridge, a student at the Royal College of Music shares his thoughts on the subject.

Vienna is a city bursting with music. Frédéric Chopin (1810-1849) described the city as “a handsome, lively city that pleases me exceedingly”. The city’s musical history is immense with Joseph Haydn (1732-1809), Wolfgang Amadeus Mozart (1756-1791) and Franz Schubert (1797-1828) being amongst the list of great musicians to walk its streets. Even the thoroughly Venetian Antonio Vivaldi (1678-1741) spent the last years of his life in Vienna where his body lies to this day. Alongside composers, Vienna is home to world-renowned ensembles such as the Vienna Philharmonic and the Vienna Boys Choir. The city also hosts one of the oldest piano manufacturer, a company that was appointed official piano maker to the Emperor of Austria in 1830 and in 1909 produced a rather unusual, and indeed expensive instrument, the Bösendorfer Imperial Grand Piano.

In the year 1909 the Italian composer Ferruccio Busoni (1866-1924) planted the seed for the Imperial Grand piano. His transcription of Johann Sebastian Bach’s (1685-1750) organ works for piano had one significant problem. He needed more notes. Busoni needed a way to replicate the 16 to 32-foot bass pipes from an organ so suggested to Bösendorfer the creation of a piano with an additional nine keys in the bass. The idea was accepted and the first Bösendorfer Imperial Grand Piano (Model 290) was produced.

The extra nine keys not only give additional notes but they enrich the sound of the piano in all registers, generating a deeper and more satisfying sound. Consequently, the American pianist Garrick Ohlsson (b.1948) described the Imperial Grand as the “the Rolls-Royce of pianos”. This reputation is furthered by the fact that numerous composers have written for the instrument including Maurice Ravel (1875-1937), Claude Debussy (1862-1918) and Béla Bartók (1881-1945). Bartok composed Piano Sonata BB 88 (1926) for the Imperial Grand with the second movement requiring some of the additional keys to be played. Numerous pianists have performed with the Imperial Grand including Victor Borge (1909-2000), András Schiff (b.1953) and Wilhelm Backhaus (1884-1969).

The piano certainly delivers on Bösendorfer’s statement that the instrument has “an impressive sound and an imposing appearance”. The presence of those extra black keys lurking on the edge of the piano creates an air of anticipation and suspense. The most intriguing aspect of this instrument, however, is that it challenges the idea of the “standard piano”. Every piano is different, be that in the number of keys, sensitivity of touch or shape. The Bösendorfer Imperial Grand represents progress that in turn broadens musical possibilities, an exciting prospect indeed!

Hear the sound of the extra keys in this video...