If you Google John Hawkins, it becomes apparent that it is a rather well-used name. The first John Hawkins you encounter is the 16th century naval commander, merchant and navigator. Then, the English actor more commonly known as Jack Hawkins, who became renowned for his portrayal of military men. A list of lawyers, sportsmen and flooring companies follows. Buried amongst these is John Isaac Hawkins, an inventor and civil engineer of the 18th and 19th centuries. Alongside his work on inventing the mechanical pencil, this John Hawkins was the inventor of the modern upright piano.

Born in Somerset in 1772, John Hawkins lived a life of invention and experimentation. His father was a watchmaker, and by 1790 Hawkins was studying medicine and chemical filtration in the United States. In the early years of the 19th century, Hawkins returned to England and created a museum of Useful Mechanical Inventions. From here onwards, Hawkins would create wide-ranging inventions from the method for sugar refining, to water filtration and a steam gun.  So how did this obsessive inventor create the modern upright piano?

For starters, it should be made clear that the idea of placing the strings vertically had existed for many years before. The Italian engineer Domenico Del Mela is often considered the inventor of the upright piano for his vertically placed piano. However, these pianos were obscenely tall, as the strings started at the height of the keys. Indeed, the pianos were called Giraffenflügel due to their great height. Hawkins’ genius was simply starting the strings from the floor. In addition, he added a complete iron frame for the instrument and suspended soundboard. Together, these features created a more compact and acceptably sounding instrument.

Find out about the world's oldest piece of piano sheet music 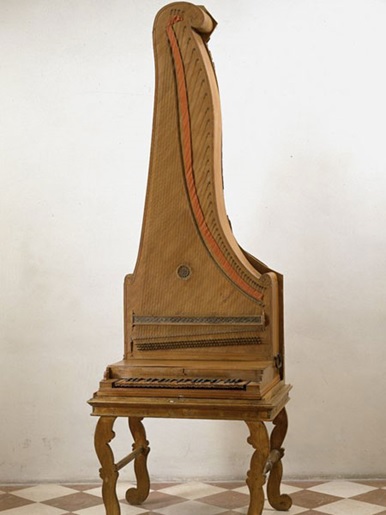 As the 19th century progressed, the technology behind the upright piano advanced further. Another English inventor, Robert Wornum, added the “tape check” action. The action greatly improved the sound quality of the pianos, a result of new mechanisms, including a spring which helped the hammer return to its resting position instead of relying on the weight of the keys. By 1812, the upright piano had grown in popularity extensively. An issue of the Repository of Arts in 1812, listed the item as in great demand because the “instrument had a very high degree of reputation”.

Fast forward to today’s world, and the upright piano is extremely popular. Many people who once dreamed of owning a piano can now have one in their living room. The compact yet clean sounding upright piano has been a real hero for pianists for over two hundred years.

Want to try Pianist for FREE? Download our sample edition