Whether you’re a celebrity or a humble unsung civilian, starting or returning to the piano later in life can bring huge joy, but also problems as well. Managing expectations is key, finds Warwick Thompson

This article is taken from Pianist 123. Download the issue here

"The life so short, the craft so long to learn," said Hippocrates.

It’s unlikely he was talking specifically about students who start the piano later in life, or those who return to the instrument after many years’ absence, mainly because the piano – unluckily for him – wasn’t invented until roughly 2,000 years after his death.

But it’s as if he had a crystal ball, for nowhere does his famous apothegm have such bite as when applied to these two groups of learners. “How I wish I’d had lessons as a child,” and “How I wish I’d kept it up” are common refrains we all hear again and again from friends and acquaintances who have grown long in the tooth.

And it’s true that there are particular problems associated with adult, as opposed to childhood, learning which can overload stress onto what should be an enjoyable challenge: I’ll be outlining some of them later, with suggestions for overcoming them, or at least ameliorating them. But first, it needs saying… Nil desperandum! Don’t be disheartened. There are as many advantages as disadvantages to starting the piano later in life. So if you’ve got an itch to start, or a hankering to return to the keyboard, then take the plunge. The potential happiness and joy it can bring is simply enormous, and with some common-sense precautions brought to bear, the potential pitfalls will appear mere molehills.

But first, a quick look at andragogy (adult learning) in general. In Psychology and Adult Learning, the education specialist Mark Tennant outlines several theories of the process of so-called third-age studying. He looks at humanistic, politicized, psychoanalytic, behavioural, and other theories – mostly to debunk them, it must be said, or at least to suggest their limitations. He only mentions music education once, in a chapter looking at behavioural theories of teaching adults (that is, by means of reward, punishment and conditioned responses), but he uses it to show the limitations of the method. He wonders how progress can be measured: 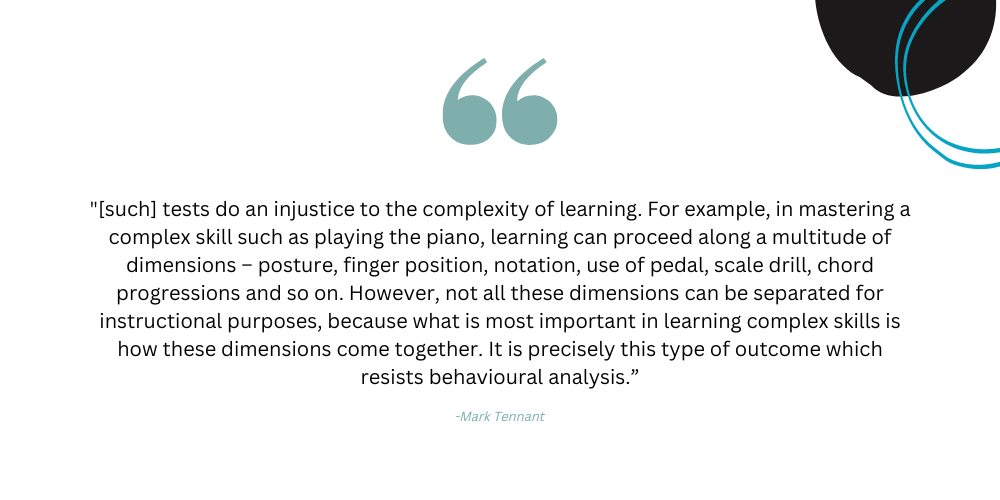 His overall point seems to be that no single method or theory of adult learning can ever be all-encompassing. But this leads us to the first of the advantages of third-age studying. In a word: freedom. An adult is generally supposed to have a broader ability to contextualize and sift information, and also possess more self-knowledge about what is beneficial in a lesson, and what isn’t. Put simply, if you don’t get on with your teacher, you can change. If children have that option, it’s much less commonly found. And it’s more likely that you will be paying for your lessons directly, with an adult’s awareness of the value of money. Such an awareness certainly sharpens the focus on time management in lessons, and its perceived benefits.

Another advantage is motivation: if you are learning/returning to the piano, it’s because you really want to. You haven’t been pushed by a tiger-mom, or a helicopter dad. And, as all teachers know, motivation removes enormous hurdles in the path of progress. 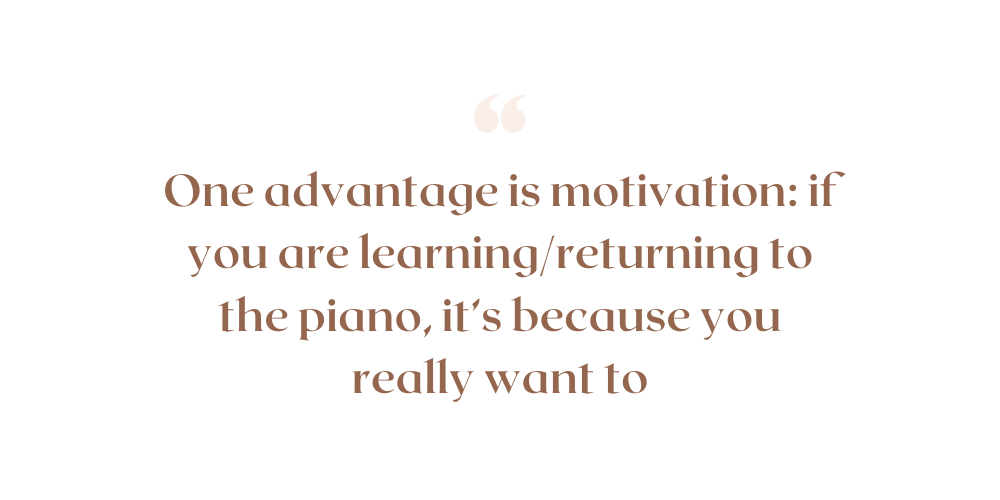 But now we come to some of the setbacks. An adult’s body is simply not as flexible as a youngster’s, and although mechanical pianistic skills learned in childhood can be maintained (I’ve seen it reported that there are natural cut-off points at the age of 8, and again at 15), they are somewhat harder to acquire from scratch later on. This can be discouraging, and even more so for someone, say, who formerly reached a high level, but who hasn’t played for many years. The knowledge of what has been lost – works which are now unplayable, exercises now impossible – can be disheartening. 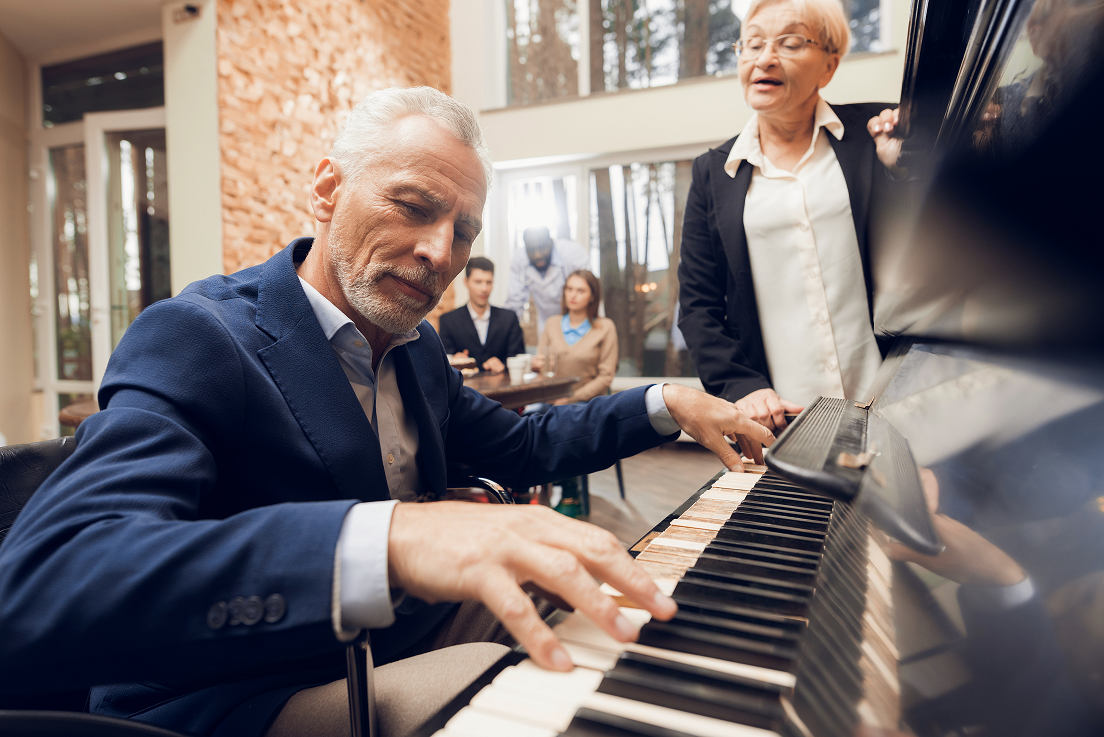 The solution to this – and it’s really the solution to the whole conundrum – is to manage expectations. If you are starting from scratch, then it’s wise to have realistic goals: to have four or five simple works which you would like to be able to play after a year, for example. If you are a returner, then your goal might be to attain a level less high than your previous one, but in repertoire which you love. If your aim is to be able to play Bartók’s notoriously demanding Second Concerto after a few lessons, you might want to reconsider your levels of realism.

Another common problem faced by adult learners is that of lack of time. The demands of family life, of earning a crust, of keeping a home in repair, of sociability, of marathon Netflix binges… somehow, snatched from all of this, time has to be found for practice. And, if you haven’t been in a learning environment for a while, the discipline needed for study has to be rediscovered too. Regularity might be your friend here: that is, always doing your practice during the same hour, or half hour, each day. Or if that’s not possible, then try scheduling the times firmly in advance, and making regular dates with yourself.

A psychological difficulty might appear too. As adults, we often get rather comfortable with our status, and it can feel like a loss of status to play at the level of a child, or possibly even perform worse than the children

around us. But if you can consider this an enormous opportunity, and not a drawback, the rewards might be greater than those found merely in your musical progress. At the risk of going all Eat-Pray-Love on you, this is where the great philosophers come to your aid. “Do you wish to rise? Begin by descending,” said Saint Augustine. “It is healthy to be reminded that the strongest might weaken, and the wisest might err,” said Mahatma Gandhi. If humility was good enough for them, it’s probably good enough for us. Just think what vital life lessons you might be learning, as you stumble over your Grade 1 arpeggios, and what a better person you might become.

So, all in all, if the desire to learn or return has come upon you, then do find some way to act upon it. With a little forethought, and a healthy dose of realism, you’ll be able to avoid all the major problems by foreseeing them. And you won’t regret it, I promise.