It's a new year, a new start. Now is the perfect time to really get stuck in to your piano playing! Pianist, teacher and writer Lewis Kesterton shares his tips on how to revamp your scales practice this year

Scales and arpeggios are one of the most common causes of frustration and boredom for so many pianists. I can guarantee that whether you’re new to the piano or a highly accomplished player, you’ll have encountered such frustration and/or boredom at some point during your musical journey so far.

I’m also certain that in the past someone will have told you how important it is to know your scales inside out, but without really explaining why.

How many times, then, have you sat down at the piano, played a couple of scales and given up? Like me, I’m sure the answer is many. Indeed, as pianists we have it tough; we have two hands and 88 keys to coordinate when working out this seemingly endless stream of patterns, and that is rather a lot for our brains to handle.

For the past few years, these have been some of the many thoughts that floated around my head every time I sat down at the piano to engage in my mundane scalic ritual, which mostly yielded less than satisfactory results. So, when the opportunity arose to create a teaching resource as part of my degree at Trinity Laban Conservatoire of Music and Dance last year, I knew right away that this was the subject I wanted to tackle.

I had to try and make scales relevant, interesting and, dare I say it, as fun as possible! Today, what began life as a 10-page booklet has now grown into an 88 (and still counting) page manual titled ‘The Pianist’s Guide to Scale Mastery’, combining theoretical explanations, examples of why scales really are important, practice exercises with accompanying demonstration videos and an anthology of both widely played and lesser-known scales. In this article I’ll be offering you an insight into a few of my ideas which you can transfer into your own practice.

Why scales are necessary

Scales are made up of patterns which can be transferred in many useful ways to almost any piece of music. The majority of music you will encounter (especially in the early stages of playing) from the Baroque period through to the early 20th century will likely have been composed in a certain key. Below are two well-known examples, the first from the Baroque period, and the second from the Classical, both written in keys of scales we tend to learn in the early stages of playing:

Notice the patterns of ascending notes in the right hand; the first five notes of G major and C major respectively. Therefore, having a sound knowledge of both scales will make sight reading through the passage a breeze!

Beethoven Für Elise in A Minor

Similarly, if we know the scale of A minor, remembering that the sharpened 7th in the harmonic variant is G and have practised some arpeggios in all inversions, we are going to be able to make a sensible choice of fingerings for the opening of Beethoven’s Für Elise.

Of course, it is very true that a lot of post 1900 music is ‘atonal’ (not belong to a particular key) or music pre-1700 may have been written in a mode instead of a key. However, having a good knowledge of scales and a bank of comfortable fingerings from scales in the back of your mind will still serve you well.

Choosing sensible fingerings and sticking to them

It is important to remember that everyone’s hands are different, and a ‘one size fits all’ approach could potentially end in disaster.

Try it out for yourself and see what you think.

Hopefully, you will recognise the mistake, but sadly, your muscle memory is not quite so clever.

Therefore, if you do not go back and correct yourself, it is likely you will find your fingers wanting to make the same mistake again in the future. One of my favourite exercises to help embed fingerings is playing in cluster chords; playing each group of three or four notes starting with the thumb together. I find that children particularly enjoy exploring the unusual harmonies created in this simple yet versatile exercise.

Here is an example in C major:

As you play through your scale in this way, think about how each group feels under your hands and pay particular attention to your thumbs. Listen carefully and make sure no single note is sticking out above the rest; this will ensure your scales sound even once playing each note in succession.

Switch up the rhythm

Once you feel ready to perform your scale there are so many fun and creative ways to practise aside from simply ploughing through each key in similar motion. One of the most well-known techniques is to employ rhythmic variation.

Many pianists I’ve encountered who adopt rhythmic variation in their practice tell me they use it to improve evenness. This may well often be the case, but this exercise can also make your scales more relevant to repertoire, as well as being invaluable in the ‘note learning’ stage by giving you more space to think. If you take a moment to consider some scalic passages in music you have played, many of them probably won’t have been written in a ‘straight’ or even rhythm. 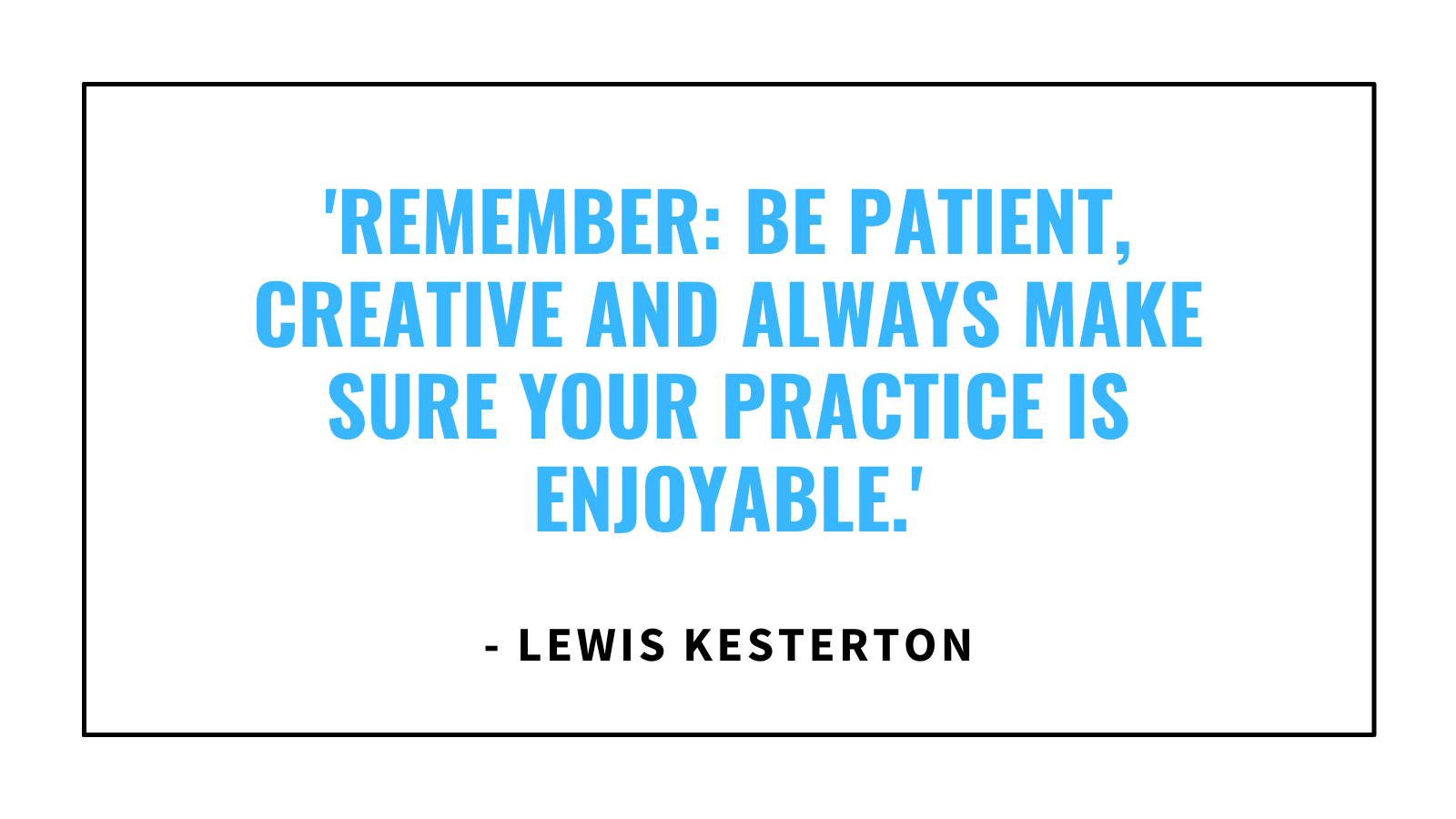 Therefore, if you are used to practising scales in a variety of different rhythms, slotting them into virtuosic passages becomes easier. Furthermore, you may also find that, when played in the context of a piece, certain notes of a scale or arpeggio may need accenting. Practising in this way allows you to experiment with placing stresses on certain notes, preparing you for different scenarios in your repertoire. Below are two common examples of rhythmic variation.

Why not have a play through them? Remember though, you can be as creative as you like!

Finally, one of the biggest problems I encounter when teaching scales is speed. We live in a world where it often seems everything needs to be done instantly, and scales are no exception. I remember from my early years at the piano my lovely first teacher constantly telling me to slow down; today, I have the same difficulty with my own students.

This last exercise, which was introduced to me when I studied at the Royal Birmingham Conservatoire by Mark Bebbington, is a fantastic way to add some much-desired velocity to scales once firmly under the fingers.

Using a metronome to keep a steady crotchet pulse of around 60bpm, play your chosen scale in quavers for two octaves whilst maintaining an even tone throughout:

Once you feel comfortable and are producing a fluent, confident sounding stream of notes, we are going to increase the speed and length of the scale. Keeping the underlying pulse the same, play your scale this time in triplet quavers for three octaves:

Next, try playing your scale in semiquavers for four octaves. Remember to think about the overall shape of your scale; this will prevent you from getting ‘stuck’ in the notes:

Finally, but only once you are feeling very confident, you may wish to try extending your scale to five octaves, playing quintuplets. This is far beyond the requirements of scales in exam settings but is great preparation for virtuosic scalic passages in repertoire: 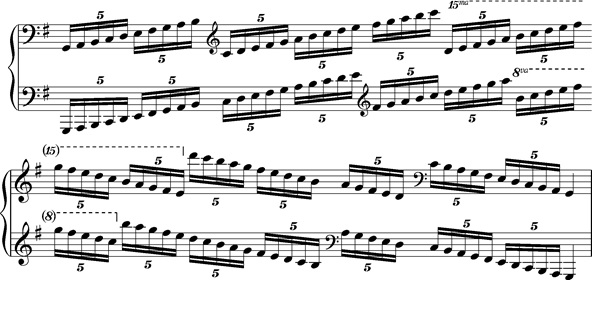 Of course, these ideas only represent the tip of the iceberg when it comes to revolutionising your scale practice. There are so many ways to make scales more interesting and exciting, and I hope my book manages to spark some joy into many frustrated musicians! The exercises featured in this article should serve as a good starting point though, and can be transferred across scales and arpeggios of all different shapes and sizes.

Remember: be patient, creative and always make sure your practice is enjoyable.

Lewis Kesterton is a classical pianist and teacher based in London. He currently studies at Trinity Laban Conservatoire under the tutelage of renowned pedagogue Penelope Roskell and will be commencing his postgraduate studies in Music Education at the Royal College of Music later this year.

In 2018, Lewis was selected as the recipient of the John Ireland Trust Piano Prize and often performs around the Capital. He runs a thriving teaching practice in West London, catering for all ages and abilities.