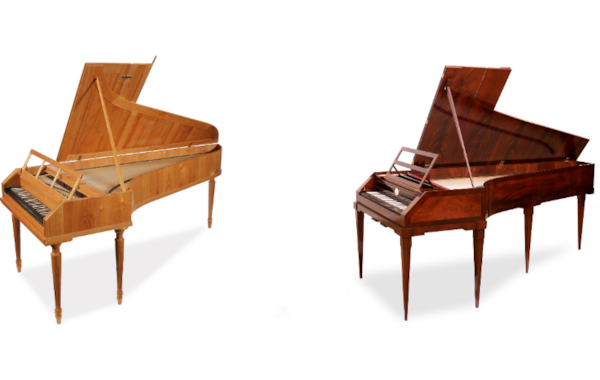 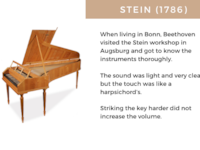 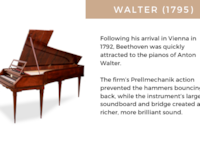 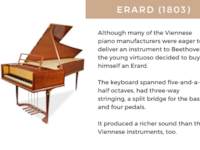 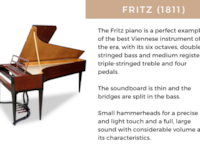 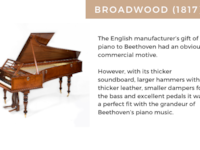 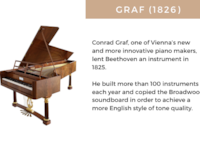 He wrote some of the greatest tunes in history, but how many of us have considered the type of instrument Beethoven composed them on? John Evans digs deep to find a hard-of-hearing composer driven by the desire for better sound…

Above you'll find a gallery of Beethoven's pianos to enjoy, along with a backstory of each one. © Chris Maene

What did Beethoven ever do for us? Aside from leaving the world some of its greatest music and influencing future generations through his themes of freedom and personal expression, he also gave us better pianos.

You could argue that the invention of the iron frame in 1825 (two years before the composer’s death), the arrival of steel wire in place of iron for the strings in 1834 and Henry Steinway’s patenting of overstringing in his grand pianos in 1859 did more for the instrument. But without Beethoven, these technologies would have been applied to pianos that were not as well developed.

We think of our time as the age of the influencer; those people who, through social media platforms such as Instagram, promote products and ideas to their trusting audience. But as a ‘young man to watch’ in the 1790s and early 1800s, Beethoven was also an influencer. He may not have had Instagram but he could play the piano better, we are told, than anyone alive. Through his virtuosity, improvising, groundbreaking compositions and sheer force of personality, he attracted a large and growing audience that hung on his every note and word. 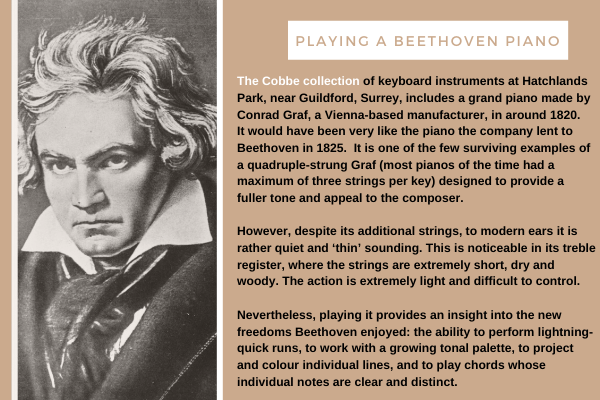 While Beethoven was enjoying popularity, so, too, was the classical piano – the forerunner of the modern instrument – thanks to innovations in its design and manufacture. Chris Maene, founder of the eponymous workshop where he builds replicas of historic pianos as well as his own modern, straight-strung instrument inspired by Daniel Barenboim, explains: ‘Beethoven’s lifetime coincides with the most interesting era in the history of piano manufacturing. From 1700 the piano was developing into a reliable instrument with more

expressive capabilities. Its dynamic range spanned piano to forte and the keyboard went from being a delicate and clear-sounding five octaves to a robust six and a half. Technical innovations, including thicker strings and bigger hammerheads, resulted in a heavier touch and a bigger sound.’

By the time Beethoven died, says Maene, many of the features of the modern instrument that we take for granted today were established – including the seven-octave keyboard, the double-escapement action, felt-covered hammerheads, early cross stringing principles and even the first metal frames.

As a consequence of the new instruments’ increased power and expressiveness, the piano market exploded, with the harpsichord of the aristocracy being replaced by the pianoforte of the bourgeoisie. To meet demand, building pianos went from being a low-volume craft business to a full-blown industry.

Not only were more pianos being made but more manufacturers were making them. In Vienna alone their number rose from 10 to 50 between 1800 and 1820. Competition between them and manufacturers in the other major centres of production – including London and Paris – was intense, with the best launching innovation after innovation.

Where does Beethoven fit in all this? The young and successful virtuoso was never shy of making his views known. He expected better from the instruments he played, once writing to a leading piano maker that listening to them was like ‘listening to a harp’. He challenged the manufacturers to do better – and they responded.

‘Beethoven’s status among piano builders was enormous, so to please him was to please the world,’ says Ronald Brautigam, a concert pianist particularly well known for his performances of Beethoven’s music on period instruments. ‘Before Beethoven, the early pianoforte was an instrument to be played and listened to at home only. It was more about quality than quantity of sound. But the Viennese Classical style of Beethoven is known for its rhetorical character; a speaking rather than singing way of playing.’ 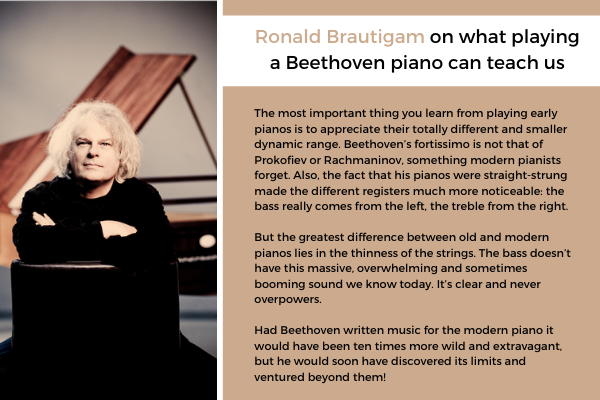 Pianos that could satisfy this new style were what Beethoven urged piano makers to design and build. While Maene cautions against overstating the composer’s influence – ‘The many developments in piano manufacturing did not specifically come together with his most inspired compositions’ – he does accept that his ‘revolutionary composing style’ played a key part in driving forward piano design. ‘Many piano brands tried to get Beethoven’s approval, hoping for a firm, commercial spin-off ,’ he says.

Crucially, in terms of his position as an influencer, Beethoven was not loyal to the Viennese brands, preferring instead to go where his heart led him. For example, in 1803 he owned an Erard that was so different in sound, touch, pedals and registers that no Viennese builder could match it.

However, by 1817 he’d outgrown the Erard, describing it as ‘quite useless’. In its place he accepted London-based piano manufacturer Thomas Broadwood’s offer of his latest and greatest grand piano. Despite being totally deaf, he craved its greater volume and wider tonal palette. In return, Broadwood hoped to get an entrée into the Viennese market.

The English instrument was very different from Viennese pianos. This enabled Beethoven to push the musical boundaries further still. For example, many Viennese makers persisted with wooden-framed pianos long after others had moved to metal, while others stuck by the Prellmechanik escapement action despite the more advanced Stossmechanik action being favoured by Erard and Broadwood. Beethoven was key in persuading other makers of the latter’s merits.

So while we rightly applaud the achievements of the piano manufacturers of the past, thanks must also go to Beethoven in particular for his work in inspiring and challenging them to go further, so hastening the arrival of the beautiful pianos we play today.

This article is taken from issue 112 of Pianist. Download the issue here.