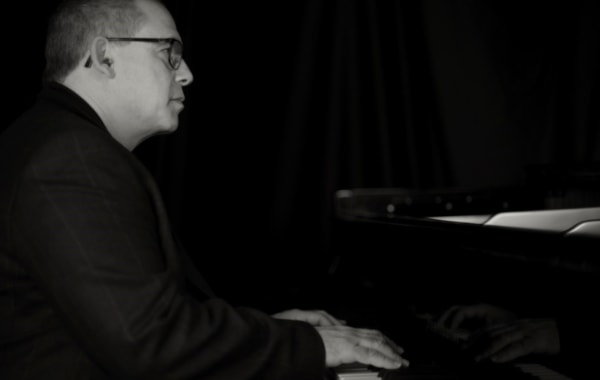 Jazz pianist, composer, and teacher Mark Polishook gives us a mind-blowing insight into his project: Robots-in-Residence.

‘The more we pianists know about the technology of the instruments we play, the better we can help designers and inventors to improve upon them and take them to the next generation.’

The first question I’m sure we are all asking is, '…what?'

Robots-in-Residence is a project based on the process of robots and humans sending emails back and forth in an attempt to form music using that very information passed between the two. The ensuing dialogue between human and robot has a rhythm of some kind embedded inside. These rhythms would then be used to compose actual music.

Aside from this magnificent project, Mark is first and foremost an American jazz pianist, composer and teacher. He currently teaches in his studio in Leicester, UK. Given he has an MM in Jazz Piano, an MA in Composition and Theory, and a Doctorate in Music Composition, the second question one might ask is, 'How does a jazz pianist transition from studying within the magnificent New York jazz scene to, years later, developing a mind-blowing installation that converts emails between robots and humans into actual rhythmic music?'

For Mark, he found the common ground between music and computer science that helped shape his journey: electronic music.

‘I played with David Clayton Thomas, the lead singer for Blood, Sweat & Tears, who were one of the seminal jazz-rock bands from the 60s. This is where I first came across a synthesiser. I didn’t realise at the time just how much the instrument was going to influence me… what catches my attention at the piano is the sound of the instrument, which is exactly what fascinated me with ‘electronic things’’. There were synthesisers with keyboards attached that I learned to use, and from that I was perpetually fascinated by this seemingly endless palette of texture electronic instruments could make.’

Synthesisers can generate or copy virtually any type of sound, ranging from mimicking live instruments, to creating brand-new, undreamed of sounds – like the crunch of footsteps on the surface of Mars. If you think about how many sounds exist in our universe, you'll never stop thinking. Where would we even start? A synthesiser gives you exactly what Mark suggests; an infinite, never-ending palette of texture.

Making the leap from electronic music to computer science

‘I’ve always been interested in the idea of music as an expression of technology. There were composers I met who worked directly with programming languages; they used code to spell out a process that a computer would, in turn, run as a programme. The outcome of the programme would be the final music composition.

From this, I taught myself how to code. I used my coding skills to create computer programmes that were what we might call ‘composing assistants’. These assistants helped me explore timbres I couldn’t otherwise have created. Computer code helped me do what traditional instruments and fabulous performers couldn’t. The deeper one goes into that space [of computer coding] the more it widens!’

‘Electronic music, for me, has been one path towards that idea of life-long learning.’

It wasn’t long before he realised he had to combine his two biggest passions in life. Mark spent a year as an artist-in-residence in the computer science department at Aarhus University in Denmark where he taught. This was where his Robots-in-Residence project came alive.

‘Because I was artist-in-residence, I had the support and freedom to work on anything I wanted to. So, the project I decided to build was an installation in which Lego robots made music from emails sent to them by an audience. The robots wrote back to everyone who sent emails to them too! Audience members could have two-way conversations with the robots. The software I wrote converted human-robot email interaction into the ambient music to which the robots danced.’

The installation was housed at Aarhus University in Denmark, and subsequently ran 24/7, non-stop, for six weeks.

The importance of music technology knowledge

Mark has learned and gained a huge amount from his incredible project. But, is it important for all pianists to have some knowledge on the technological side of music?

’YES. A piano is itself a technological artefact. Whilst we don’t often think of it as such, it’s only the technology that’s been available at different times that makes it possible for pianos to exist.’

‘I think the most important thing a pianist can do is be a continuous, life-long learner.’

‘There’s always something about the music that we don’t know, but which we can learn. Electronic music, for me, has been one path towards that idea of life-long learning.’

From jazz piano, to synthesisers, to robots, to teaching, Mark recently became the Course Director in Jazz Improvisation at Finchcocks – a newly transformed piano school in Kent, UK. He teaches weekend piano courses on jazz improvisation for adults of all abilities.

Delve further in Mark’s world by visiting his website.

Find out more about his teaching at Finchcocks here.