Earlier this year, I was invited to the launch of a new Steinway piano. Not entirely a new instrument, but more a new ‘design’; the Chromasoul Steinway. This Chromasoul piano is a Steinway Model D instrument that has been fastidiously painted by renowned Argentinian artist María Inés Aguirre. I wrote about Mia and the concept behind her pianos a few years ago on my blog, and you can read the article here.

Mia has been Steinway artist-in-residence since 2010, and in that time has transformed several pianos, hand painting each one with her own brand of beauty. Such explosions of colour won’t be to everyone’s taste, and those who prefer a Steinway with a deep matt black finish should perhaps look away now! However, there’s no doubt about the love, care and attention to detail lavished on this instrument, and for me, the intricate brush strokes and the richness of the paint simply must be admired in person. It’s most certainly a breath-taking design, and Steinway sells Mia’s pianos to various piano collectors around the world.

The Chromasoul piano was born in 2018 and formed the latest stage in Mia’s long-standing project ‘The Music of Colour’. According to the artist; ‘my inspiration comes from movement and light, which is why I want the piano to evoke the energy, movement and colour of the Ballet Russes….you could say I am writing a musical score in colours which I hope will touch everyone who sees the piano – and add an extra dimension to the music created on it’. 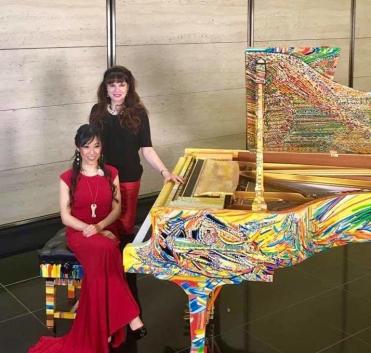 With Aisa Ijiri and the Steinway ‘Chromasoul’ Piano

The launch took place at Moor House situated on the London Wall on May 9th 2019. Japanese pianist Aisa Ijiri gave a short recital on the instrument which was recorded and subsequently transformed into a short film which focuses on how the instrument was created.

Aisa opened the concert with a piece I wrote for her, Aisa: Sand, Silk & Love. This short work explores various colours and harmonies, oscillating between major and minor whilst circumnavigating the entire keyboard, and in many respects, it complements the painter’s philosophy behind the creation of this piano’s design.

Aisa: Sand, Silk & Love will be published by Schott (in the Edition Schott Series) in January 2020 as part of a volume of five virtuoso pieces called Simply Driven, and it has been used as the soundtrack to the following film. Watch it below.