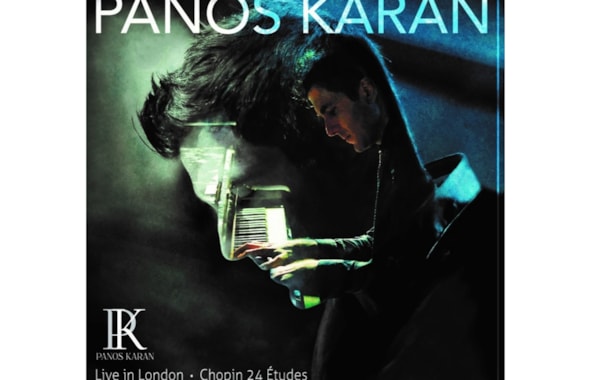 We award 5 stars to the pianist's new album

Flicking through the booklet that comes with Panos Karan’s delightful looking new album, it’s hard not to notice that his humanitarian work is just as important to him as his grand performances. For those of you that aren’t aware, Greek-born Karan founded the charity Keys of Change, an organisation whose main aim is to use music to improve the lives of children around the globe. Pictures of him playing to children around the world in areas such as the Amazon, Russia and Sierra Leone are interspersed with pictures of him performing at Carnegie Hall, Symphony Hall and Tokyo Opera City inside the album sleeve.

I can’t question his passion for the piano given his impressive and inspiring list of humanitarian work. It’s obvious he has a unique talent for using the instrument for the betterment of mankind. So, it would be a rather large disappointment were that to not come across in his latest release of Chopin’s 24 Études, which were recorded live at London’s Cadogan Hall last year.

Thankfully for Karan (and for me writing this review), his passion for the piano not only comes through, but it bursts like a flood breaking a bank.

Back at the time of their composition in the 1830s, Chopin’s 24 Études were regarded by many as revolutionary. (Fun fact: there are actually 27 Études. The extra three are without an Opus number.) “They not only became an orderly demonstration of a new piano style and the formulas peculiar to it, but also an artistic ennoblement of this style.” Those were the words of Polish musicologist Tadeusz A. Zielinski. You’d think that almost 200 years on this feeling would have faded, yet Karan makes each piece sound new once more.

Throughout his performance of both Op. 10 and Op. 25, the pianist’s deep love for these Chopin Études is impossible to miss. Op. 10 No. 3 in E major is particularly impressive to me as he pulls the piece here and there whilst weaving his emotions in between the glorious notes being played.

The brightness of the recording may add to the above statement that Karan makes each piece sound new once more. However, it does lack a few extra touches of bass – something which perhaps could have been solved by adding a little more lower end EQ (frequency equalisation) during the post-production process.

Is that enough to take a star off this album? Absolutely not.

Bravo Panos, on presenting not just a Chopin-esque performance, but a Karan-esque one as well.