Rather like the sustaining pedal, the una corda is multi-layered. So how can we get the best use out of it?

When una corda (or UC) is marked in the score, depress the left pedal, lifting it when you see the marking, Tre corde  (or TC, meaning three strings): Due corde is another direction, and this refers to the left pedal being partly depressed.

On a grand piano, the keyboard moves, or shifts, to the left when the una corda is depressed. This is because the hammer strikes one string less than usual, hence the name, una corda, or one string.

On the upright piano, the left pedal moves the hammers closer to the strings (as opposed to shifting them), shortening the stroke and reducing the sound but not really changing the timbre, and therefore the keyboard does not move. If UC is not already written in a score by the composer, you may consider adding the una corda to selected passages.

2. Experiment by using the left pedal on a few scales

This is a great way of getting accustomed to the pedal. Start by putting your heel firmly on the floor with your body weight behind it. Then prepare to play the pedal with the ball (or top of the ball) of your foot, towards the big toe. When depressing the pedal, observe just how little movement is necessary for the sound to change, usually from a distinctive, brilliant tone to a gradually softer, more muted one.

You could try touching the pedal lightly at first, graduating to full use of the pedal, from the top to bottom of a four-octave scale.

Take a look at pianist and teacher Graham Fitch's in-depth video lesson on the una corda pedal below for more advice.

Practise taking the una corda pedal down and then raising it at varying degrees, concentrating on the colour and, probably to a lesser extent, the volume change.

This can be a both interesting and helpful exercise. On some pianos, it can change the sound from quite penetrating or percussive, to a warmer, richer hue.

4. Try using the pedal where an accompaniment figure occurs

Considerable skill is required for this exercise, which should ideally be practised with exact application; the overall semblance is one of a hazy, subtle, perhaps slightly unfocused sound for the accompaniment figures, with a brighter, fuller, more colourful melody.

5. Try using the pedal to add a muted sonority to trills and ornaments

This is particularly useful for long trills in higher registers on the keyboard. If the left pedal is applied towards the end of a fast trill, it can give the ornament a distinctly less sonorous tone. 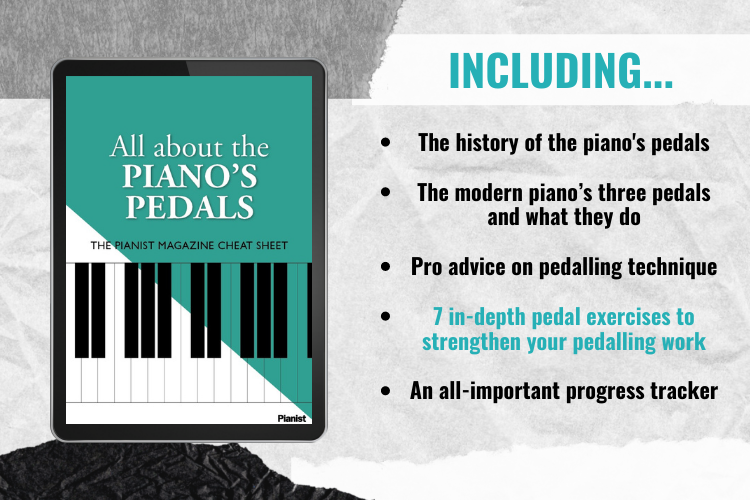