10 books that made me a better pianist 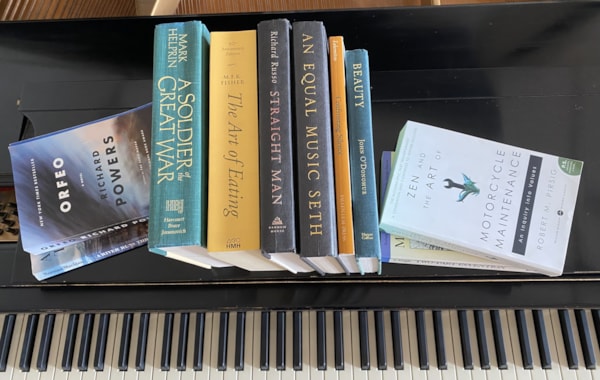 When I was a kid I had two sanctioned escapes:  practicing the piano or reading a book.

I played and read everything I could – learning old American Songbook standards along with Bach Inventions and reading Judy Bloom, C.S. Lewis, paperback romances, and an entire bookcase of Reader’s Digest Condensed Novels.

Perhaps is was inevitable that I’d make music and writing my career.

I’m still a voracious reader – one who gobbles down close to 100 books a year.

My “keeper” library spans nearly every genre (yes, everything from Thomas Merton to Stephen King) and out of these there are a handful that helped shape me as a musician.

Here, in a happy blend of fiction and non-fiction, are 10 of my favorites...

An Equal Music by Vikram Seth

Synopsis: Michael Holme is a violinist, a member of the successful Maggiore Quartet. He has long been haunted, though, by memories of the pianist he loved and left ten years earlier, Julia McNicholl.

Now Julia, married and the mother of a small child, unexpectedly re-enters his life and the romance flares up once more. The two lovers confront the truth about themselves and their love, about the music that both unites and divides them, and about a devastating secret Julia must finally reveal.

Favorite quote: “Every rehearsal of the Maggiore Quartet begins with a very plain, very slow three-octave scale on all four instruments in unison: sometimes major, as in our name, sometimes minor, depending on the key of the first piece we are to play.

No matter how fraught our lives have been over the last couple of days, no matter how abrasive our disputes about people or politics, or how visceral our differences about what we are to play and how we are to play it, it reminds us that we are, when it comes to it, one.”

Why I love it: Of all the authors who write about music, Seth is one of the few who succeeds at getting inside what it really means to be a musician. His writing inspired my own when I wrote my novel, The Waco Variations.

Synopsis: Composer Peter Els opens the door one evening to find the police on his doorstep. His home microbiology lab – the latest experiment in his lifelong attempt to find music in surprising patterns – has aroused the suspicions of Homeland Security.

Panicked by the raid, Els turns fugitive and hatches a plan to transform this disastrous collision with the security state into an unforgettable work of art that will reawaken its audience to the sounds all around it.

Favorite quote: “Music is awareness flowing in through the ear. And nothing is more terrifying than being aware.”

Why I love it: Powers writes about the drive to create as well as the experimental music of the 20th century with deep knowledge, passion, and lyricism.

A Soldier of the Great War by Mark Helprin

Synopsis: Alessandro Giuliani, the young son of a prosperous Roman lawyer, enjoys an idyllic life full of privilege: he races horses across the country to the sea, he climbs mountains in the Alps, and, while a student of painting at the ancient university in Bologna, he falls in love.

Then the Great War intervenes. Half a century later, in August of 1964, Alessandro, a white-haired professor, tall and proud, meets an illiterate young factory worker on the road. As they walk toward Monte Prato, a village seventy kilometers away, the old man – a soldier and a hero who became a prisoner and then a deserter, wandering in the hell that claimed Europe – tells him how he tragically lost one family and gained another.

Favorite quote: “To see the beauty of the world is to put your hands on lines that run uninterrupted through life and through death. Touching them is an act of hope, for perhaps someone on the other side, if there is another side, is touching them, too.”

Why I love it: This novel is a celebration of the immortality of love and beauty – everything I seek when I sit down to play the piano.

Synopsis: William Henry Devereaux, Jr., is the reluctant chairman of the English department of a badly underfunded college in the Pennsylvania rust belt.

Devereaux's reluctance is partly rooted in his character--he is a born anarchist--and partly in the fact that his department is more savagely divided than the Balkans.

Favorite quote: “Clearly, the only solution was for all of us to take one step backward so that the door could be pulled open. By this point a group of plumbers, a group of bricklayers, a group of hookers, a group of chimpanzees would have figured this out.

But the room contained a group of academics, and we couldn’t quite believe what had happened to us.”

Why I love it: Russo depicts a dysfunctional English department, but it is also an accurate portrayal of every music department I worked in as an adjunct professor. I read this every August, just before the start of the academic year.

Synopsis: A collection of essays and commentaries by the famed Japanese composer, Toru Takemitsu.

Favorite quote: “It is in silence that the artist singles out the truth to sing or sketch. And it is then that he realizes his truth exists prior to everything.”

Why I love it: I’m a fast-talking American with Italian heritage. Takemitsu taught me that without silence, music is just noise.

Synopsis: Thoughts and essays on the current status of music, piano-playing, and pedagogy through the noisy filter of contemporary culture.

Favorite quote: “Music is a revolt against Time – time as the chronicle of equal moments and of mortal spans.  Music aims for transcendence, for the gathering of rosebuds and the rendezvous with eternity. Music turns the mundane moment into a bower of infinite pleasure and redemptive understanding, assembling its flowing moments into orbits of curved and complex time.

Music dispels the fear of mortality and the need for rigid and permanent identities. Music rejects the nine-to-five schedule, the hunger for cash, the encroachments and limits of crass appetite. Music is a cake which grows as you eat it, which has seven layers and seven more for each layer.”

Why I love it: In addition to the sheer eloquence of quotes like this, Sherman reminds me that piano teaching is as much a noble and artistic act as performing.

Synopsis: In this masterful and revelatory work, O'Donohue encourages our greater intimacy with beauty and celebrates it for what it really is: a homecoming of the human spirit.

As he focuses on the classical, medieval, and Celtic traditions of art, music, literature, nature, and language, O'Donohue reveals how beauty's invisible embrace invites us toward new heights of passion and creativity even in these uncertain times of global conflict and crisis.

Favorite quote: “It is as though music reaches that subtle threshold within us where the soul dovetails with the eternal…

Perhaps this is where the mystical depth of music issues from: that threshold where the face of the soul becomes imbued with the strange tenderness of divine illumination.”

Why I love it: This – a hedonistic celebration of all things beautiful – reminds me that behind notes and technique, what I seek is an encounter with beauty.

A River Runs Through It by Norman Maclean

Synopsis: A memoir that reads like a novella, and a memorial to Maclean’s dead brother, Paul. The finely distilled product of a long life of often surprising rapture – for fly-fishing, for the woods, for the interlocked beauty of life and art – A River Runs through It has established itself as a classic of the American West.

Favorite quotes: “In our family, there was no clear line between religion and fly-fishing.”

“Eventually, all things merge into one, and a river runs through it. The river was cut by the world’s great flood and runs over rocks from the basement of time. On some of the rocks are timeless raindrops. Under the rocks are the words, and some of the words are theirs.  I am haunted by waters."

Why I love it: Every word in this spare memoir is beautiful, and each one was chosen with the care of a poet. I don’t have to be a fly fisherman to experience the art and transcendence of it through Maclean’s writing.

This is what we do as musicians, if we are humble enough to let transcendence shine through the notes we play.

Zen and the Art of Motorcycle Maintenance by Robert M. Pirsig

Synopsis: A narration of a summer motorcycle trip undertaken by a father and his son. It’s a personal and philosophical odyssey into fundamental questions on how to live.

Favorite quote: “To the untrained eye, ego-climbing and selfless climbing may appear identical. Both kinds of climbers place one foot in front of the other. Both breathe in and out at the same rate. Both stop when tired. Both go forward when rested. But what a difference!

The ego-climber is like an instrument that’s out of adjustment. He puts his foot down an instant too soon or too late. He’s likely to miss a beautiful passage of sunlight through the trees. He goes on when the sloppiness of his step shows he’s tired. He rests at odd times. He looks up the trail trying to see what’s ahead even when he knows what’s ahead because he just looked a second before.

He goes too fast or too slow for the conditions and when he talks his talk is forever about somewhere else, something else. He’s here but he’s not here. He rejects the here, he’s unhappy with it, wants to be farther up the trail but when he gets there will be just as unhappy because then *it* will be “here”. What he’s looking for, what he wants, is all around him, but he doesn’t want that because it *is* all around him.

Every step’s an effort, both physically and spiritually, because he imagines his goal to be external and distant.”

Why I love it: Replace “climber” with “pianist” and Pirsig’s quote goes right to the center of my biggest challenge as a musician.

The Art of Eating by M.F. K. Fisher

Synopsis: The comprehensive collection of the famed food writer’s essays on food, love, and life.

Favorite quote: “We talked, and well, and all the dinner was most excellent, and the wine was like music on our tongues. Time was forgotten… We watched as in a blissful dream the small fat hands moving like magic among bottles and small bowls and spoons and plates, stirring, pouring, turning the pan over the flame just so, with the face bent keen and intent above.”

Why I love it: Fisher reminds me that music – like dining – must be a full-sensory immersion that's best enjoyed when shared with friends. One of the best ways to share your piano playing with your friends is to perform some duets. Try this eight-handed piano piece.