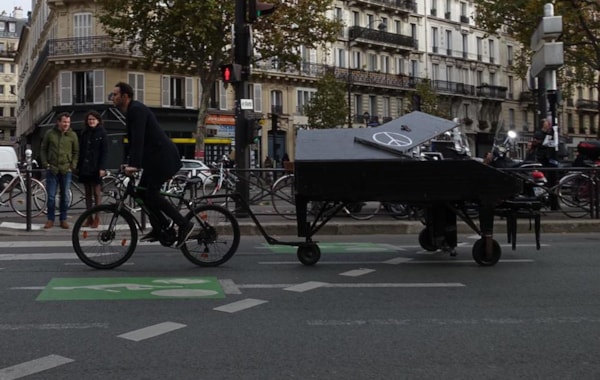 How does he manage it? Davide Martello, the man behind it all, explains how

It’s a good job that bike lanes are now being built all over the world at an increasing rate.

Otherwise, street performer Davide Martello wouldn’t be able to tow his baby grand piano behind him as he cycles through the streets of San Francisco, Budapest, Frankfurt and beyond.

Yes, you did hear that right.

“[Bike lanes] are so perfect, it’s like they’re designed for my piano,” the 37-year old professional musician told Bicycling.

As expected, he gets plenty of attention on the streets for his method of travelling. “People take pictures of me. I think I’m the only guy in the world bicycling a piano around.” 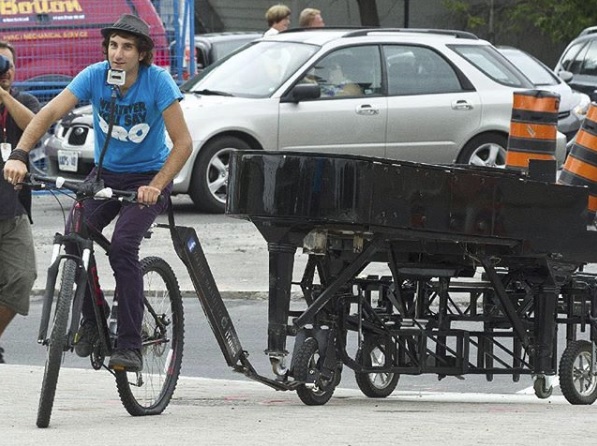 The seasoned performer began playing the piano at the age of 9 before he began touring the streets of the world at the age of 27. Whilst he has spent the last 10 years street performing across the globe, he only started lugging his piano behind his bike five years ago after his car broke down, stranding him for four months during a tour in New Orleans. That was, until a close friend of his suggested switching to a bike. With help, Davide created a piano dolly and attached it to the back of his back. He soon toured America using this method, but quickly found it was far too heavy and impractical.  “It’s too much metal and it was too heavy to push it around,” he explains.

Battery-powered scooter tires were affixed underneath the instrument, which allowed Davide to tow it without using too much energy. The batteries last around 3-4 hours, meaning he always has to keep an eye on the levels to make sure he doesn’t end up stranded once again!

The batteries aren’t the only thing he has to keep an eye on. Just last week, he crashed his piano whilst trying to ride a steep hill in San Francisco. 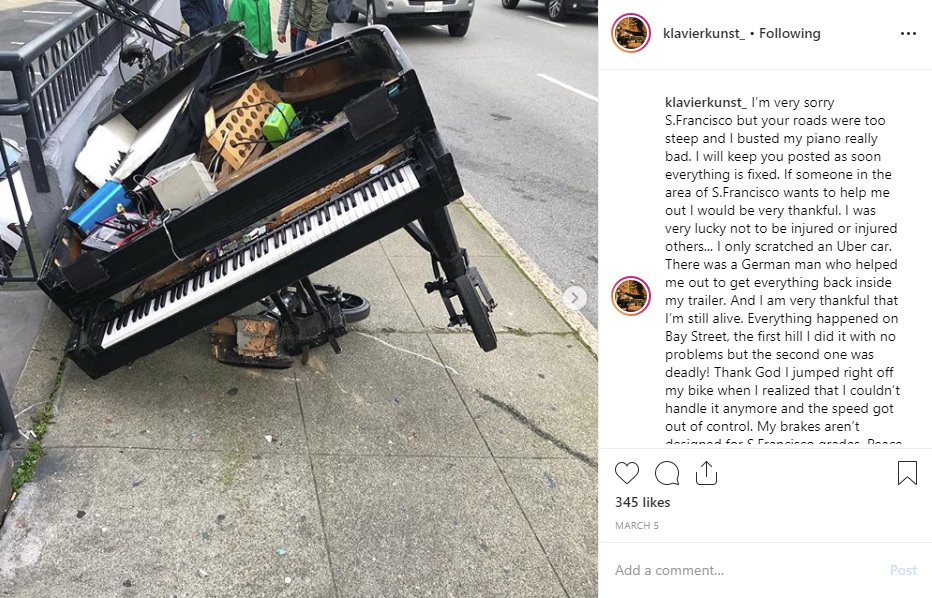 “I’m very sorry San Francisco but your roads were too steep and I busted my piano really bad,” he announced on his Instagram. “I will keep you posted as soon everything is fixed. If someone in the area of San Francisco wants to help me out I would be very thankful.”

“I was very lucky not to be injured or injured others... I only scratched an Uber car. There was a German man who helped me out to get everything back inside my trailer. And I am very thankful that I’m still alive. Everything happened on Bay Street, the first hill I did it with no problems but the second one was deadly!”

“Thank God I jumped right off my bike when I realized that I couldn’t handle it anymore and the speed got out of control. My brakes aren’t designed for San Francisco grades. Peace and love, Davide.”

See when he is playing near you by following his Instagram.