Pianist and examiner Janet Newman gives a step-by-step lesson on one of Beethoven's most beloved and most well-known pieces: Für Elise

This article is taken from issue 71 of Pianist. Download the issue and you will also receive a copy of the Score.

Composed in 1810, Für Elise was not published until 40 years after Beethoven’s death

It is one of the most popular and enduring pieces ever written for the piano, alongside the first movement of the ‘Moonlight’ Sonata, which I wrote about in Pianist No 65. The original manuscript has been lost and there are some uncertainties within musicological circles as to whether the piece we have now is exactly the one that the composer would have heard.

There are also differing opinions as to who ‘Elise’ may have been – was she Therese Malfatti, Beethoven’s friend and student? Beethoven proposed to her, but was turned down in favour of an Austrian nobleman. There are at least two other potential Elises, but in the end, there seems to be no definitive answer and it remains a mystery.

Für Elise comes from Beethoven’s middle period, at a stage in his life when his hearing was rapidly deteriorating

Czerny, however, remarked that Beethoven could still hear speech and music as normal until 1812. It was published as a bagatelle, but it is actually written in rondo form. The structure is A-B-A-C-A, and, of course, the repetition of the main theme makes learning and practising the piece relatively straightforward.

The constant semiquaver movement throughout poses a problem in terms of evenness of touch and fluidity and
it needs good dexterity in fingerwork. At the same time, it also demands suppleness of approach in the wrist and arm. Otherwise there can be a slightly mechanical effect, which is entirely the opposite of what is required musically.

In the main theme (bars 1-22), the phrasing arises from the last three semiquavers in each bar

There should be a sense that the music does not have barlines, so that it flows forward without rigidity. Practise this section at a slow tempo, making sure that you play as evenly as possible, without accenting any notes unnecessarily. Follow the pedalling written on your score.

Note that if you take care to slightly overhold the LH fifth finger, you can depress the pedal without hurrying and also ensure that you do not lose the important bass notes in the arpeggios. Then harmonic changes are clearly shown but there is no element of urgency.

Gradually build up the tempo to the metronome marking suggested – but remember that the marking is only a suggestion and you may come to feel that your natural tempo is a fraction slower. This is fine, as long as there is an overall sense of movement and progression. Before you re-enter with the theme at bar 15, it would make musical sense to make a little ritardando to ease your way.

Keep the LH nicely cushioned in tone by staying low in the wrist and by finger pedalling (overholding the fingers slightly) and there will be enough of a sense of pedalling support but without losing any of the harmonic clarity. Aim for a singing tone in the RH, but at bar 30, lighten the touch somewhat as you play the faster demisemiquavers, so
that there is a real feeling of fleetness.

If you find yourself stumbling over any of this passagework, try using different rhythms to help you gain control of the articulation. Hold up various beats in turn, one after another: first, play the first beat at half speed while playing the second and third beat as normal, then do it to the second, then the third in turn.

Coordinate the LH exactly with the passagework; slow practise building up the tempo gradually is one of the best ways to achieve this.

The repeated A in the bass line feels quite threatening and sinister. It needs to be a presence, but at the same time, must not overwhelm the singing RH chords. Listen very hard to the balance, and keep your hand close to the keys and your fingers curved.

Repeated notes with changing fingers can be awkward, but again, a slow build-up of tempo and direction will help to bring this under control. Make the RH chords as legato as you can. The way to practise this section – and indeed, to practise most legato chords – is to break the chords down into their component parts. Because the part you most want to project is the top line, start by taking just the melody line and work on strengthening it.

Then, once you feel you have this securely in place, add the next part down (C#/Bb) and build up the security again. Continue doing this until you have built up the whole chord and eventually (and it does take time!), you should be able to move seamlessly from one position to the next without losing the warm cantabile tone.

As this leads you back to the final appearance of the theme, it has a special importance and needs to be played without slipping up! I have lost count of the number of times I have heard young pianists fall at this last fence, as they realise that they are almost there – and then just lose concentration momentarily, enough for fingers to go ‘off piste’.

In spite of its popularity and over-familiarity, Für Elise still has much to offer pianists and as ever when something has enduring appeal, there is usually a very good reason for it!

2020 marks 250 years since the birth of Beethoven, so why not download our Beethoven special? Play Beethoven includes: 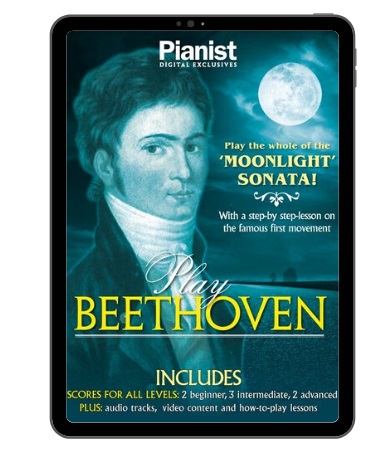