You might forgive yourself for thinking you have woken up in paradise on your first morning at La Balie, nestled as it is at the top of a gentle slope in the lush, undulating meadows about 50km south of Bergerac in France’s Aquitaine region. Then you realise you are ‘on duty’ at 9.30am with seven other amateur pianists to begin an intense, meticulously planned roster of masterclasses, private lessons and mini-recitals under the penetrating but positive eye of our course tutor, the highly acclaimed pianist Charles Owen.

La Balie is masterminded by the current chatelaine of the estate, Fiona Page. A determined and successful businesswoman, Fiona purchased La Balie in 2012 with absolutely no idea of what she wanted to do with it. Then, in 2014, she abandoned investment banking and, deploying whatever resources she could muster, transformed the four-hectare estate into a magical home for herself and the succession of visitors welcomed to the various summer courses on offer – including yoga, embroidery and week-long piano retreats –all hosted by experts in their field. I am here for the first course of the 2019 season, which takes place 11-18 May.

It is incredible to comprehend that Fiona drove through the massive and stylish renovation in only seven months: the residential weeks started a year later. However, when you see her driving her renovated 1980s Massey Ferguson 165 red tractor around the estate, you can believe she’s capable of driving almost anything. Four years ago, the tractor – with Fiona astride – was featured in Tractor magazine; the tractorphile’s equivalent, I guess, of Pianist magazine! 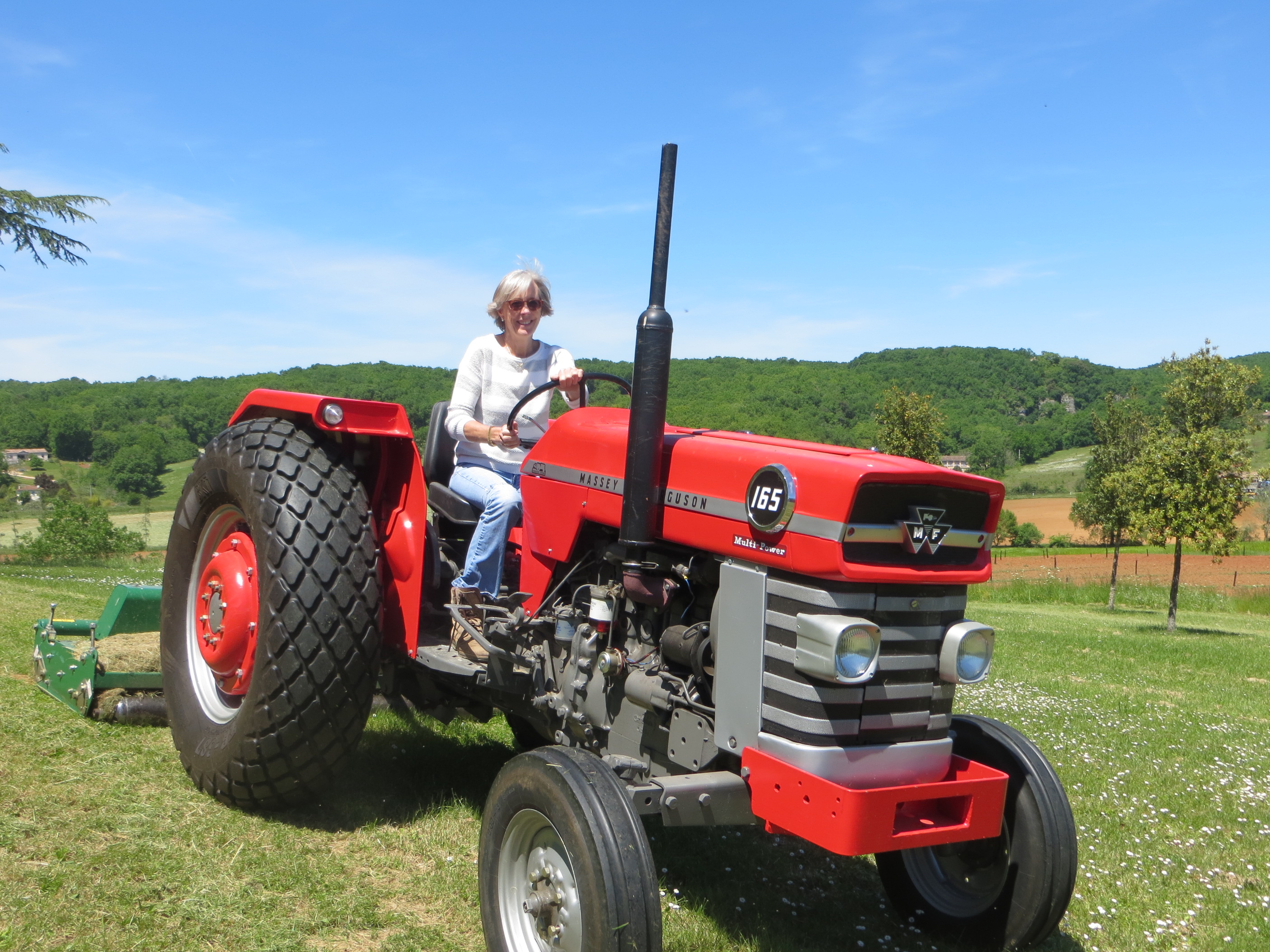 Fiona Page on her tractor

Within the property are three conjoined cottages, each with two or three bedrooms, a sitting room, a fully-equipped kitchen, and (most importantly) a sturdy upright practice piano. Fiona herself lives in the main farmhouse (with another piano), also home to the tutor for the week, as well as the excellent resident chef. Everything is appointed to the highest and most stylish specification – and it is all spotless.

An outstanding house restoration aside, the stand-out building must be the inspiring new concert hall, which seats an audience capacity of around 100, and is equipped for our week with two grand pianos, including a magnificent Steinway D. The acoustics, as well as the rural view, are superb. Charles gives two solo recitals during the week, to which members of the public are welcomed. I am allocated traffic marshalling duties for the first Sunday evening concert, and only just resist the temptation to confuse the locals with a contraflow system or asking them to drive on the left-hand side. 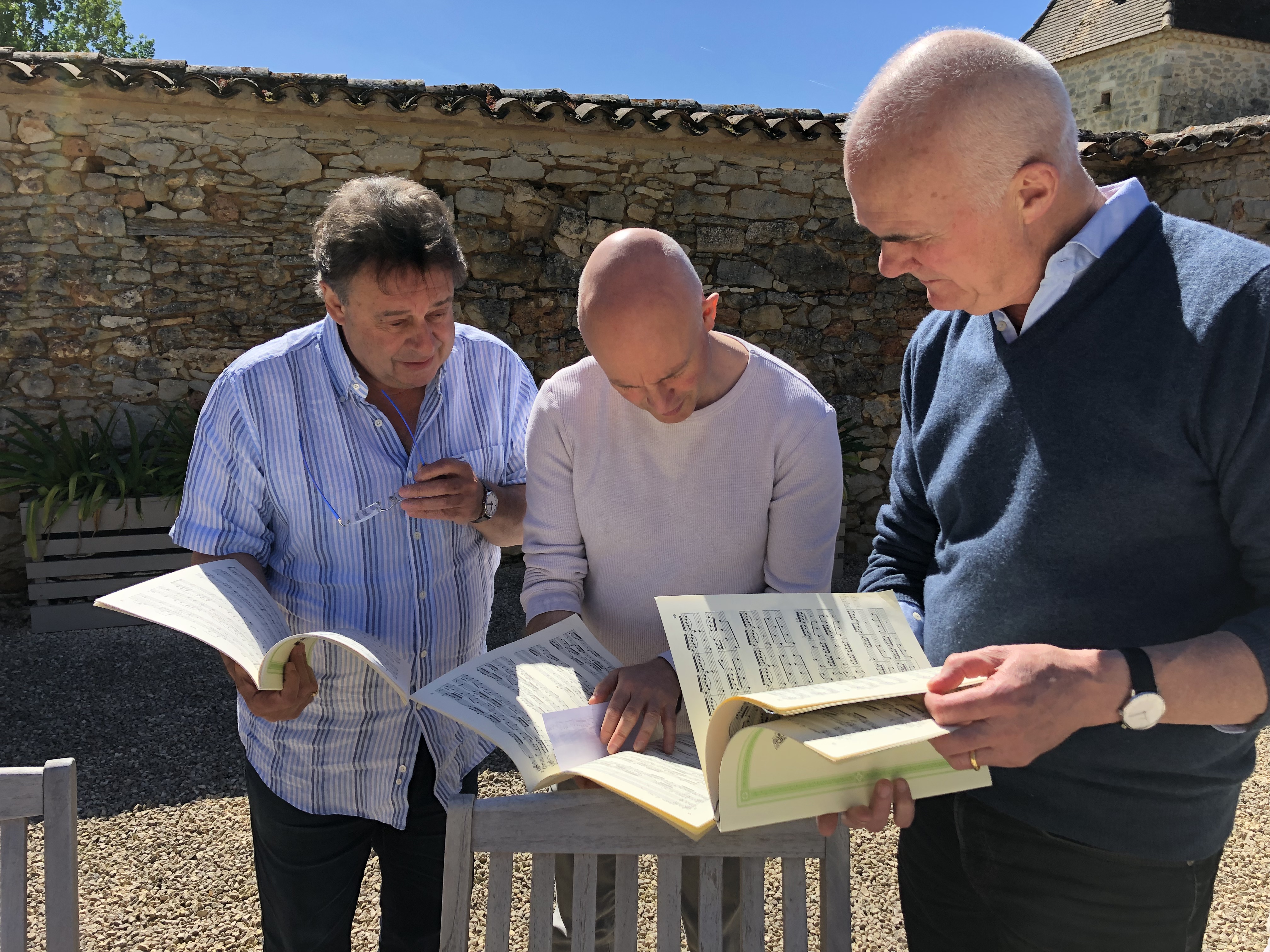 Charles’s first recital is electrifying – with an energised Bach Italian Concerto, two exquisitely delivered Schubert Impromptus, Schumann’s Opus 28 Romanzen, and to finish, two of Ravel’s Miroirs. He is framed throughout by an incomparable view onto the rolling barley fields and oak copses. If Charles plays brilliantly that evening, he is like a man possessed in his mid-week recital, taking place late at night in a candlelit setting. More Bach: the rarely-heard early Capriccio, followed by more Schubert and Debussy’s fiery Estampes. The climax has to be the two Liszt transcriptions of Schumann’s ‘Widmung’ and Wagner’s ‘Liebestod’ from Tristan und Isolde – overwhelming cascades of notes shooting into the moonlit fields outside. I only wish I could return to hear his Bach Goldberg Variations which he’ll perform during La Balie’s second week in June. Lucky are those who have signed up for it, as well as for the other weeks this summer with pianist-tutors Noriko Ogawa, Vedrana Subotic and Martin Cousin.

And so the work begins

Fiona advertises her piano courses as being for advanced amateurs and ‘rusty returning pianists’. I feel comfortable within the latter category. We are a varied and international group of different ages and professions, at different stages in our adult piano studies or ‘rehab’. I think all eight of us are to some extent nervous (I certainly am), even the returnees, who number four out of the eight. We are a tight unit, intent on a regime of strict practice, laced with humour and punctuated with coffee and delicious homebaked pastries. We comprise three Brits (a pharmacologist, a financier and me), a Barbadian car rental firm owner, a retired Bavarian high court judge and four medical professionals (a retired Swiss anaesthetist, a Swedish gynaecologist and a German obstetrician). The atmosphere is in no way competitive (a great relief!), but instead full of mutual support and pleasure in the progress of others. 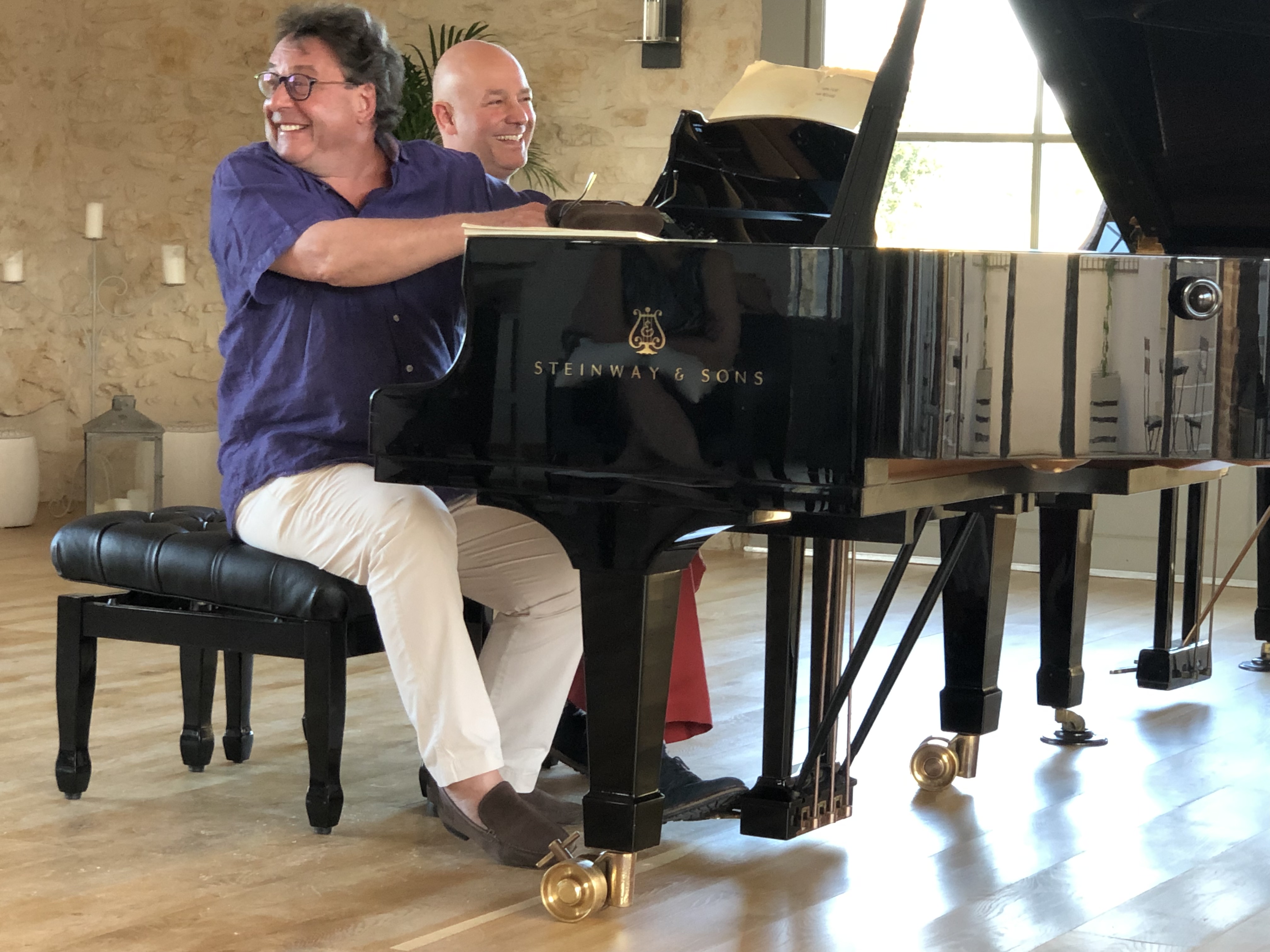 Sunday begins with a morning of four masterclasses, to which I contribute with a reading of Schubert’s C minor Impromptu Op 90 No 1. Charles offers me penetrating insights with good humour, tolerating my technical lapses. Time out for lunch ‘en plein air’, but then it’s back to afternoon practice with strict timetabling, which ensures that we all get ample time at the piano. In the evening, if Charles is not playing, there’ll be a short recital by one of us (scary!), and possibly more relaxed playing of duets, followed by an excellent dinner, invariably including mouth-watering cheeses and freshly baked bread. I begin to realise what a unique opportunity La Balie is for an amateur pianist: you not only have the chance to indulge a lifetime passion in a magical setting away from ‘real-life’, but you are also able to study intensely with a top international concert pianist.

Monday morning sees four more masterclasses – a pattern to be repeated throughout the week. Without exception each masterclass has a great deal to offer; furthermore, the benefit of attending the masterclasses and the students’ informal recitals means that you learn from your peers as well as the teacher. You find yourself drawn to new repertoire too – in my case to the Scriabin Preludes and Chick Corea’s Children’s Songs.

In the coffee break I return to my cottage to find a cheerful ‘plombier’ mending my heated towel rail. I play him some Mendelssohn and in return he tells me of a recent visit he made to a Schumann concert nearby. In the meantime, we have a quick ‘dating session’ over who will play duets with whom on the ‘free-for-all’ Wednesday-evening duet bash. I find German partners for my Kurtág/Bach arrangements and the Brahms Liebeslieder waltzes. Charles and I will also repeat the duets we played at our Help Musicians UK fundraiser in London last November – Schumann’s Bilder aus Osten and the Fauré/Messager Souvenirs de Bayreuth based on the Ring. I also have the role of curating the mixed programme into an appropriate order.

Back to Monday, and I have a busy afternoon, with two further hours of practice followed by a lesson, but I manage to catch both a swim and a short nap in between. I adore the Steinway D in the concert room, which lifts my playing so effortlessly – the tonal variations and richness of sound are way ahead of most of the pianos I have ever played. After a short ‘aperitif ’ recital by three fellow students, we adjourn for another excellent dinner. I am in bed early: it has been very exhilarating – but equally very exhausting. 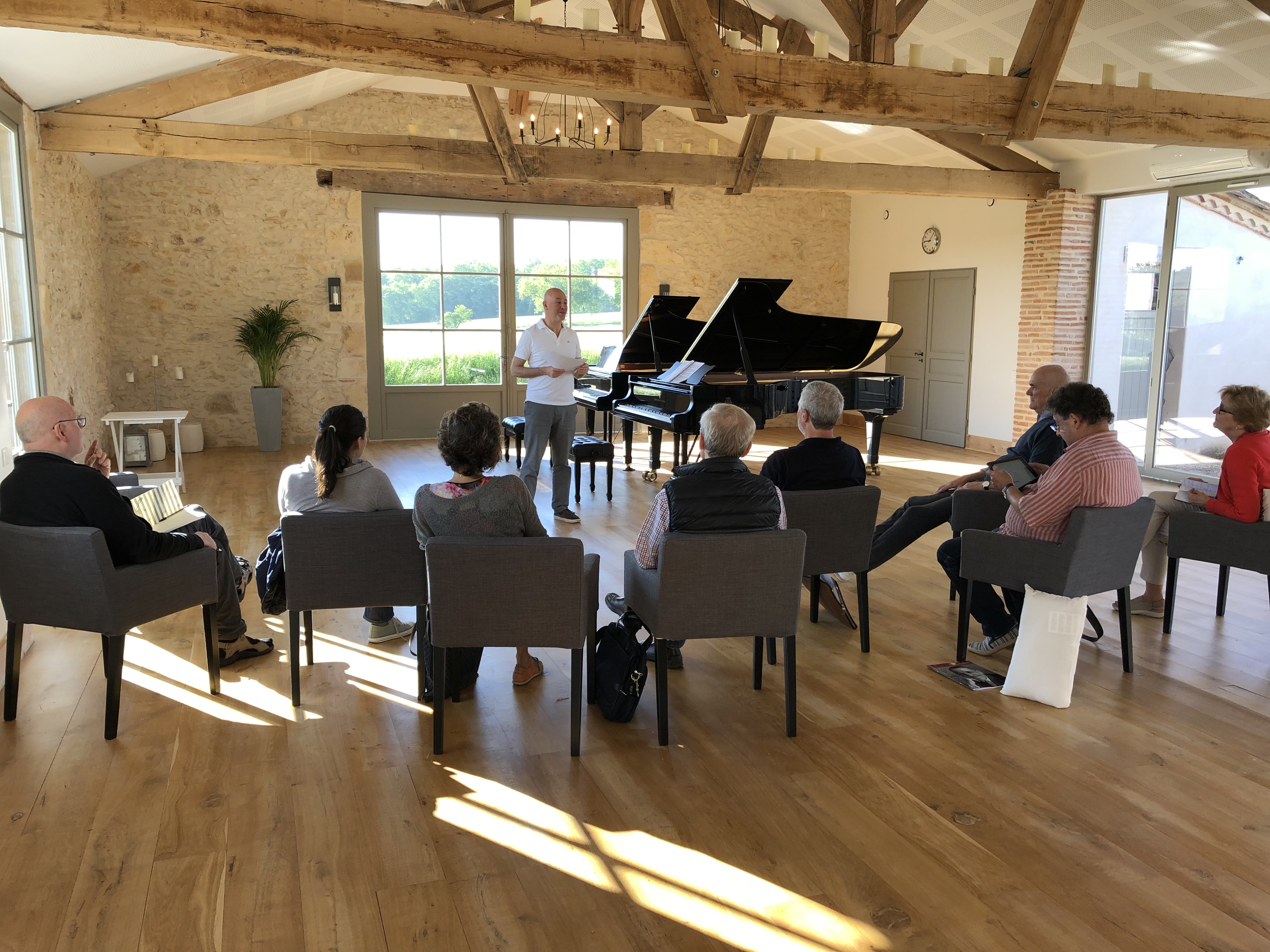 Tuesday follows something of the same pattern, though I now manage over four hours of practice, including a masterclass with Charles, during which I achieve a personal milestone by performing six of Schumann’s Waldszenen straight-off to a warm reception by my colleagues. It’s becoming a bit of a Schumann week for me; I cannot help but return to this most profound and complex of German Romantics. I’ll be including the Intermezzo from Carnival of Vienna and Romanze No 2 in my recital programme this Thursday evening – another milestone in my rehab regime.

The course culminates with a ‘piano jam’ session, for which I again have to fashion a coherent sequence from a pretty random selection of items – Madeleine Dring, Scriabin, Poulenc, Chick Corea... you get the drift! Everyone contributes something, except Charles, who for once becomes a relieved silent member of the audience. Charles does however make a daily fashion statement, with a breakfast display of his ‘soi-disant’ house trousers (pantalon de maison, haus hosen, husbyxor, depending on your origins) – a kind of faux tartan check experience of somewhat startling aspect. He is even spotted at work in them very early one morning.

There are several other attractive looking residential piano courses in the region, each no doubt with its own distinctive touches, but for quality of experience and teaching, intensity, intimacy, and care for detail, I would hazard that La Balie will be hard to match, whether you go for the house trousers or not.