Up Close with Eric Wortham II 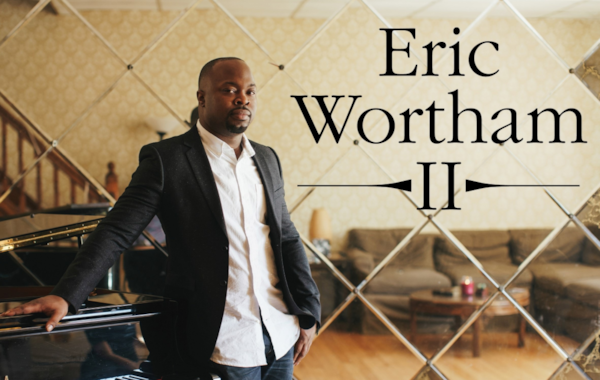 Eric Wortham II, the Philadelphia-born pianist who has played with Adele, talks to his near-namesake, Erica Worth.

Eric Wortham II, the Philadelphia-born pianist who has played with Adele, talks to his near-namesake, Erica Worth...

It’s the end of the working day here in London, but my interviewee has just woken up for the start of his.

Eric Wortham II is the man in question. As I dial his number, I wonder where our conversation will lead – after all, I’m more accustomed to speaking to concert pianists such as Lang Lang and Stephen Hough than I am to a jazz/R&B/blues pianist like Wortham, who teams up with the likes of Jill Scott, Vivien Green and, of course, Adele. So I start with the obvious question:

How did the son of a church pastor who never took formal piano lessons as a child become the recognised pianist, composer, songwriter and producer he is today?

'I was singing in the church choir at a youth convention when I was about six,’ Wortham tells me, ‘and I was watching the organist seemingly press buttons – and I was really impressed with the configurations, the ways his hands moved, and the tones he created. I was also really impressed by how he was able to understand what to play, to kind of incite the choir’s mood. If he wanted them to cry, he would do certain chords and configurations and melody. And if you wanted excitement from them, he could do that too – just with his fingers. It was amazing that someone could control that, just with their fingers. I started playing as a result of that.’

And thus started his fascination with the piano. ‘My sisters started piano before me,’ he says. ‘I’d sit and watch at their piano lessons. We had a family keyboard, and I used to doodle, and it was all by ear. Being a church boy, I would be at someone’s church Monday, Wednesday and Sunday, listening to soulful, spiritual music. This was music intended to evoke emotion. Once I had fallen in love with the piano, instead of sitting next to my mom, sisters and dad in church, I’d sit by the organ and try to remember different configurations, and then take them home to practise on our keyboard.’

Doodling around on the piano is one thing, but what is it that made him delve deeper?

‘When I like something, it becomes my focus, it becomes my world, until I reach a certain proficiency. I have to master it. Why not operate at that high level? I have a competitive nature. I didn’t like just being a keyboard player in Philadelphia. I wanted to be on top – or on top in my mind. I wanted to be mentioned among the greats, not just in my city or in my school, but among some of the greats in the world. I had to find out who the greats were. So around 13, when I was looking at high schools, I begged my parents to go to CAPA (the Philadelphia High School for the Creative and Performing Arts).’ At CAPA, Wortham began learning the tools of his trade. ‘My teacher there, Kevin Rodgers, is still a great influence in my life. He made sure I had the proper tools. He really helped shape me. CAPA was a very, very tough school in terms of its curriculum. It was a place where you goes to make a name for yourself. A wide variety of genres were taught there, from classical, to choral, to jazz improv. In order to stay afloat and get good grades, you had to mingle with all art forms. I did some studies of classical music, pop music, Broadway, choral – and my favourite, jazz.’

Has improvising always come easy to you?

‘Yes, that’s what I prefer to do. I can play anything. You don’t want to learn a song with a visual blueprint of the keys. You want to learn it the way it’s in your heart – in your heart you sing it. I don’t have a muscle memory from key strokes. I just hear it.’

And transposing? I suppose that's effortless as well?

‘Yes, I can transpose very well. That’s why real pianists don’t play keyboards. Keyboards do the transposing for you. That’s why I like real piano. One of my favourite piano players is Keith Jarrett. My ideal would be a career like Jarrett’s where I can just walk onto a concert hall and sit at a Yamaha grand piano.’ Wortham tells me that he first heard the sounds of the instrument when he saw Chick Corea playing on a Yamaha on the video Chick Corea Akoustic Band Alive. ‘He really demonstrated the instrument’s beauty. What I fell in love with was that from the high end to the low end, it still maintains its quality in terms of tonality. It still was crisp. It didn’t get too “low” from middle C downwards, as other pianos do. Yamaha, from the very first note to the last, still has that precision and pristine brilliance that I like. Not too heavy and not too light. The action of the keys is perfect for my type of hands. I have a Yamaha at home. And the one that I play on tour is also Yamaha (C3X Silent).’

Over the phone, I cannot see what type of hands he has, but he tells me, ‘I have chubby fingers! I can stretch a little bit, but I don’t really like to use a lot of force. I liked to play relaxed and loose, which is better for your wrist and your metacarpals. I can get a really good sound out of a Yamaha without having to do too much work.’ Wortham has mentioned idols such as Jarrett and Corea, but he knows a thing or two about classical pianists. ‘Pianists like Glenn Gould and Vladimir Horowitz wouldn’t just remember the music. They really knew the music – it came on the page and was in their heart. Most music is in your heart.’

Wortham’s collaborations with top musicians in his genre are numerous. He’s toured with Grammy Award-winning singers such as Jill Scott and Adele, and collaborated with Vivian Green, Aloe Blacc, Kindred the Family Soul, Musiq Soulchild and Jeff Bradshaw. Is a strong working relationship imperative?

How much time do you have to practise with a vocalist before going on tour?

‘That usually is contingent upon the soloist. With Adele, we would run down the songs that she and I do together as duets. Depending on how she felt with our cohesiveness, we would do another run down or she’d say, “No, I’m good.” Working with her has been very different in the sense that this is one of those rare times when I get to work with a vocalist who really knows the ins and outs of her music. It makes things go a lot faster. I ask how many performances he thinks he's done with Adele to date. ‘I got hired in September of 2015 for her 2016 tour, to be the pianist. It was more than 60. We did other performances and promo. I’d put it somewhere close to 70-75 shows. We did Saturday Night Live, Ellen, Radio City Music Hall. Glastonbury in the summer of 2016 was incredible. Insane!’

"Most music is in your heart." - Eric Wortham.

There’s little doubt that Wortham has made a success of his art, but still ‘for the most part yes, I’m learning. Every time I step onto a stage, it requires a different focus and attention. This kind of music (for touring) is not what I grew up playing and it requires a lot more concentration because of my parts and how they have to be on time, and how they affect a much bigger picture. Every day I learn something new.’

What would you say is the secret of your success?

‘Being a success is all a matter of opinion. But what makes someone a great person? You’ve got to be a really nice understanding human being. No one wants to be around someone who is hard to deal with. Who wants to be around someone who makes their day heavy? It’s bad energy. Being a genuinely nice person and caring for others is step one. And after that, if you really try to be selfless and put the pride aside, and be honest, work on the areas that you’re weak – that’s a good recipe for success.’ One last question, which I cannot help but resist:

‘Yes, he lives in my mind! I just don’t like being called “Junior”. I think one day I may be Eric Wortham III!’ As the interview draws to a close, and I thank him for his time, Wortham says, ‘It was so nice to talk to you, Erica Worth.’ And I reply, ‘So nice to speak to you, Eric Wortham.’ ‘What a world – that’s awesome,’ he says.