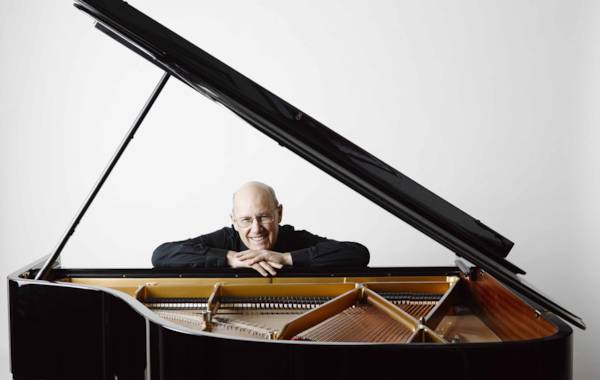 Your upcoming recording features a collection of 16 brand new pieces for solo piano, written by everyone from Judith Weir and Nico Muhly to Richard Reed Parry of Arcade Fire fame. What first inspired you to create this collection, and how did you go about reaching out to all of these composers?

While I was putting together a collection of timelessly beautiful romantic piano pieces for my album Sixteen Love Songs, I started wondering what their 21st century equivalents would sound like. I wasn’t sure how composers would react to being asked to write a love song for solo piano, but the initial response to the idea was so enthusiastic that I started setting about the necessary fundraising for a companion album of sixteen contemporary love songs and drawing up a shortlist of possible composers to approach. My aim for the new collection was that it should represent a broad cross-section of different contemporary styles. Having collaborated with a large number of composers over my professional lifetime (over 100), I had plenty to choose from whose work I knew. But I also took the opportunity of listening to a great deal of music by composers I was less familiar with.

Eventually, I commissioned fourteen composers, half of whom I had worked with before. The other seven I approached through publishers or mutual contacts. The remaining two pieces of the sixteen were the winners of the over-25 and under-25 categories of a love song composing competition that I launched in 2016, which attracted 526 entries from 61 countries. The positive response to this whole project has been beyond anything I could have imagined at the start of it.

What do you feel are the advantages to a young pianist of taking on new and different repertoire, such as these 16 pieces?

I think it is incredibly important for young musicians to be inquisitive and adventurous in their exploration of repertoire generally and to embrace new and unfamiliar musical languages. Maybe it is forgivable later in life to stick to one’s comfort zone (although this is not how I like to live!), but definitely not for a student. It is good for all musicians to be stretched and challenged by new music, but it can also be very liberating to perform music that does not bring a weight of performance tradition with it and even more liberating to play music that has never been performed by anyone else. And I think that working with living composers can teach us a lot about playing music of the past. Composers think differently from performers, so an interesting dynamic can build up if you have the opportunity to work closely with a composer, especially over a long period of time.

Do you have any advice on how a student might approach these works, or new contemporary repertoire in general?

I don’t think contemporary music should be approached differently from any other kind of music. Whether studying Mozart or Mussorgsky or Muhly, the challenge is to understand as much as possible the composer’s individual musical language. The more familiar you are with a composer’s music the better placed you are to play an individual work. Contemporary music, like music of the past, also benefits from multiple performances. The only particular advice I would give is to grab opportunities to work with composers whenever possible. If you can have your interpretation of a piece validated by the person who wrote it, you will find it immensely satisfying and exciting as well as instructive. Unfortunately, that is never going to happen when we play Beethoven or Schubert!

The recording also features two works by non-professional composers, who succeeded in your 2016 composing competition. Do you ever compose new music yourself, and what do you feel pianists can benefit from studying composition?

A piano teacher encouraged me to compose when I was 11. I was terrified of the idea at first, but then started enjoying it and used to spend hours improvising at the piano. I think the summit of my composing career was having a two-part Christmas carol performed at a local church when I was about 13. For a year after leaving university I had lessons with the composer Hugh Wood, which was inspirational. I knew by then that I had absolutely no talent as a composer, but he taught me to start thinking like one, and I found his commentaries on other composers’ works as useful as anything I ever learnt in piano lessons.

I have composed on and off since then, without ever producing anything of any substance, but I really do believe that trying to write music, however inadequately, helps us to come closer to understanding those who really do have the ability to compose.

Can you tell us what you’re most looking forward to about releasing the new album? And do you have any plans to release the sheet music?

The hard work of the album is now finished: the fundraising, the commissioning process, setting up and judging the competition, then learning, performing and eventually recording all the pieces. It’s been a labour of love in many different ways! So the arrival of the finished CD the other day was very exciting and something I had been looking forward to immensely.

Now I am eagerly looking forward to seeing how people react to the different pieces on the album. In a collection as diverse as this I am not expecting listeners to enjoy every piece equally, but my experience from public performances so far is that every piece on the album can be someone’s favourite. What all the pieces have in common is that they display a very personal side of the composers who have contributed, and I hope the universal theme of love will tempt a wide audience to sample this collection.

Your career as a member of the Schubert Ensemble has seen you perform over the world. How do you cope with the pressures of life as soloist and member of the Ensemble?

Back in the 1980s, in the early years of the Schubert Ensemble, it was a challenge to combine a career as a soloist and at the same time to be prime mover of a chamber group, but when the Ensemble really started taking off in the 90s, it made more sense to put the Ensemble first. From the time when all members of the Ensemble made it their individual priority a lot of pressure evaporated. In the last few years, solo playing is something I have fitted into the months of the year when the Ensemble has chosen not to work. When the Ensemble comes to an end after 35 years on June 30th, I will miss it a lot, but at the same time, I am very excited to be able to give more time and energy to my solo work again.

This is a hard question to answer. Like everyone, I have made my fair share of mistakes in life and taken plenty of wrong turns, but it is hard to regret any of these. I believe that we learn so much from our mistakes and wrong turns, and, as much as anything, they make us who we are. So I would not advise my younger self to pursue different paths from the ones I took, even the dead ends. But I might suggest giving more energy to learning other languages, which are a great asset for a musician and best learnt when we are young.

I have loved travelling and performing and teaching abroad, but always feel frustrated when I can’t communicate freely in the language of my hosts.