Read our in-depth interview with the Italian pianist Alessandro Taverna 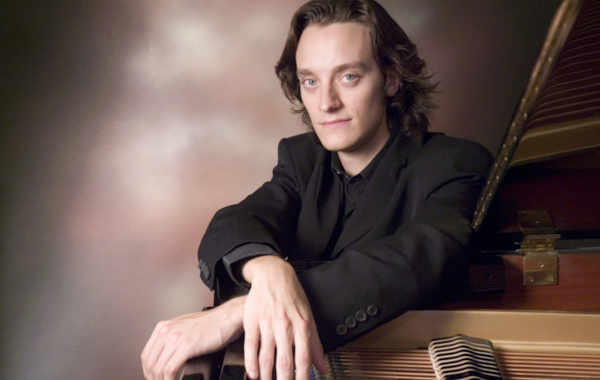 Prior to his recital at the Harrogate International Festivals’ Sunday Series on April 30, 2017

How did you begin as a pianist – did you have a musical family or particular mentor/inspiration?

I don't come from a musical family; my parents have never pushed me to start learning piano and I remember everything came very naturally. I remember the songs I listened to on the television and my wish to play them by ear on a little keyboard which I received when I was 4 years old.

My father bought music tapes too which I listened to at home. I particularly remember a wonderful rendition of Mozart Piano Sonata in A minor divinely played by Sir Andras Schiff - that became the soundtrack of my childhood. I have a twin brother and we started together to learn piano.

You first appeared at the Harrogate Festival in 2010, sharing an event with a British national treasure – Alan Bennett – at the Royal Hall. Did you meet Alan? Have you any fond recollections of that event?

I felt so privileged to share the stage of the Royal Hall with Alan Bennett - I knew of him from his work that has been translated in Italian. The invitation came from Dame Fanny Waterman, who is a close friend of the great novelist (I had met her the year before during the Leeds Piano Competition). I especially remember a witty atmosphere and the smiles on every face. Though - I must confess - I wasn't able to understand every single word of Alan Bennett's performance (a few moments, the funniest, showed a typical Yorkshire sense of humour. He has a special intonation and musicality in terms of accents and idiom). As a young Venetian pianist who had just started to face the English concert scene, it was such a joy to perform with such an authentic British national treasure.

Reviews of the time said your playing was ‘ecstatically-received’ by Harrogate audiences – no pressure for this time! How do you handle nerves (if you get them)?

I normally handle the tension before the concert in a good way. There's something fascinating in the rite of preparation of a recital. I normally focus on the pieces that I'm going to perform, trying to benefit as much as I can from my morning practice sessions.

You’ve clearly played all over the world, at amazing venues – but Yorkshire has played a key part in your career after the Leeds International Piano Competition – how important was that competition and how did it impact on you?

It was definitely one of the most important events in my life. I will never be grateful enough to the Yorkshire people for their support and for what they gave me in terms of appreciation and friendship. Everybody in the piano world knows that the Leeds Piano Competition is one of the most relevant cultural and musical events worldwide. In that sense, it has certainly been a watershed in my artistic life. For me particularly it has also represented the encounter with Dame Fanny Waterman, a person whose qualities and intentions in dealing with music are the same that I try every day to repeat to myself: integrity, seriousness, perseverance and sincerity.

Watch Alessandro's finals concerto performance from the Leeds in 2009:

Your playing inspires poetic praise – one critic in The Telegraph said of a sonata: In Taverna’s hands the piece took on a sense of unbounded yearning, the human soul floating beyond the bounds of anything human… And another (The Independent) said when you played at the Leeds competition: “the world was suddenly suffused with grave beauty: flawless minutes of poetry.”

I'll always keep in my heart this sentence from The Independent: "Taverna sounds to me like the natural successor to his great compatriot Arturo Benedetti Michelangeli"; this, although I am aware I can't reach the intellectual and musical stature of Michelangelo, is for me a constant source of inspiration - a great yearning towards a pianist to whom I feel to be bound (over the common nationality) as my ideal reference point, for the sense of respect for the music and for the mission of us performers: the pianist is a medium that conveys a greater message, we are just a tool, not the main actors.

Is there a particular piece of music or a composer that speaks to you personally?

There are several. I'm particularly fascinated by the personality that Liszt had as a composer and as a pianist. I have a real veneration for the Russian music (Rachmaninov and Prokofiev above all) and I'm in deep love with the Classics: but if I have to point a piece that more than the others was significant to me and that every time I play it moves me, I would say Chopin Concerto in E minor. It was the concerto I played in the Finals of the Leeds Competition (also for this reason I am particularly fond of it). I remember, since from the very first time I listened to it, I was amazed by the fact that a young composer could have included everything in such a piece of music: suffering, pain, love, lightness, delight... in other words life!

There’s often the image of the tortured artist, obsessed with their art. Being a professional musician, touring the world, does it take over your personal life?

Music is a very important part of my personal life, but as an artist, I think we should not forget to find a good balance. Just because we experience the deepest emotions of the human soul - those ones through which music speaks - we must always be vigilant not to be overwhelmed by them. I believe that we're dealing with something of the utmost importance and seriousness and that we must act seriously, but without taking ourselves too seriously. Life experience informs our work.

The Telegraph described your stage persona as being ‘the perfect embodiment of the pale and interesting aesthete’ – and being ‘otherworldly in demeanour’ is this a fair description?

It is certainly an image that can sound a bit ambitious, but in the end, I don't feel it is too far away from myself. The important thing is to keep always at least one foot on the ground!

You’re playing an all Chopin programme in Harrogate, can you tell us a little about the programme and why you chose Chopin?

Chopin has been always a travelling companion for me. I challenge myself with his music with a certain awe. Sometimes I'm not completely sure of owning the experience to deal with this repertoire... but at the same time I feel that, even in planning my recitals throughout the year, it becomes an almost inevitable necessity - almost as if I want to measure what point of the journey of my artistic maturity has been reached. The programme I chose for Harrogate offers a multifaceted vision of the forms that Chopin uses, spacing from the massive corpus of the four Ballades to the Nocturnes, the Scherzos, the Polonaise... and maybe a few more surprises.

What would you say to convince audiences, who may not normally go to a classical concert, to come and give your concert a try?

In order to find a convincing reason for those who normally don't attend concert halls, I would turn the question and think why people in the 21st century (in a world and in a reality troubled by a lot of problems) still go to a classical concert. They are looking for something different, not just escapism... something that perhaps we tend to forget in daily life. It's the desire to be touched and comforted, to listen to something that still has not been told by anyone. I hope to give these emotions to those who come to Harrogate on 30th April.