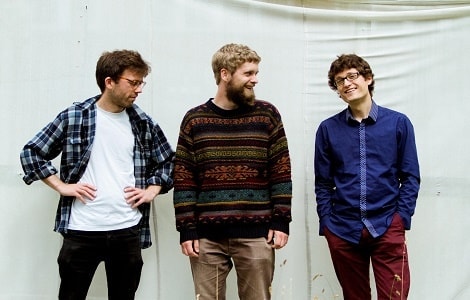 ·Treppenwitz, how did this name come about?

When I was trying to think of a name for the project, one of the things I was aware of was not wanting to fall into the tradition of naming it after the person running it, e.g. the Matthew Aplin trio. I wanted the name to represent a solid, unified identity. We've all written compositions for it, and when we're playing I feel like the three of us have an equal role in shaping the music.

Treppenwitz is a German word derived from treppe (stairs) and witz (wit). It's a translation of the French phrase l'esprit de l'escalier, which is the devastating comeback only thought of once you've left the scene of the debate- i.e. halfway down the stairs as you're on your way home. The music also has a European aesthetic, and the improvised scenes in Berlin and Köln have generated some music which has influenced us.

·How did the group form?

Tom and I used to have a trio with a Philadelphian drummer called Matt McGraw, and we were starting to explore the freer side of playing. After he moved back to the US, Tom and I decided we wanted to continue down that path, so I asked Steve if he wanted to play with us. We've been together for four years now.

I'm not completely sure that I would call Treppenwitz jazz, even though the three of are jazz college graduates and we generally play to those sorts of audiences. Jazz is the Black American folk tradition characterised by blues and swing; there are some of those elements in there, but the European influence is more dominant.

Having said that, I think I'm attracted to playing jazz because the music is different every time you play it. Most of the time there are some preconceived elements there before you start playing, but the architecture, shape and quality of the music emerges in realtime. Taking risks is paramount, and every sound played is a decision which affects the direction of the music. You also discover the music at the same time as the audience, which is quite a special thing.

·What tips do you have for people interested in learning Jazz on the piano or wanting to improve their playing skills?

Jazz is an aural tradition, so listening to as much of it as you can is key. There are so many great records worth digging into. Go to gigs and jam sessions, and find some people to play with. Having lessons always helps, and learn from as many different sources as possible.

I think the key to improving playing skills more generally is persistence. The work has to be carried out over a long time, probably a lifetime. The piano is by nature a harmonic instrument where you can do several different things at once, and I think it's important not to get too bogged down in that – the physical and intellectual elements of it. It's a percussion instrument, and it sits right in the centre of the ensemble. Hearing and feeling your way through is the way to do it. The fundamentals are essential, and not to be underestimated – time, feel and sound are the package that everything else is wrapped up in. I'm a little wary of stressing technique, but it's important to think about the relationship between your body and the instrument, so that you can learn to execute what you're hearing without developing any strain. Like most instruments, the piano is not particularly ergonomic, so it takes some extra work.

·What are your future goals as a group?

We're looking forward to touring the UK for a while from the end of February (see dates below). Arts Council England will be supporting us, which we all feel very grateful for. There are also some whispers of gigs later in the year, which might turn into another string of dates. When we did the sessions for Short+Long Ditties, we recorded enough music for two albums, so we'll be looking to release the second record at some point. After then, who knows? It might be nice to record again...

Wednesday 14th March  Jazz at The Butterfly and Pig, Glasgow