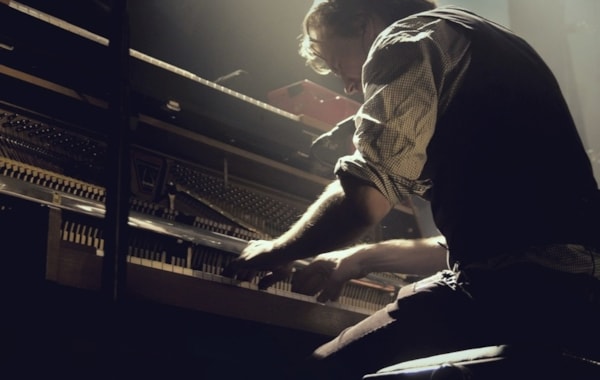 Kaada's new release is breathtakingly raw; an album he claims to be 'one of the most enjoyable records to make.’

Composer and pianist John Erik Kaada has been described as a key voice on Norway’s blossoming music scene. With a mass of successful film scores, music for commercials, and an entertaining dip into the world of jungle rhythms all wedged in between this release and his 2001 debut, Thank You for Giving Me Your Time, it’s not a surprise that Closing Statements is one of sheer brilliance. Take a listen to his new album at the end of the article!

The release is compiled of 11 last words and farewell utterances from those on the verge of death. When an album’s foundations lie within such utterances, one must not force anything. One must be respectful of these deeply precious final words and handle them with great care. For Closing Statements, I applaud Kaada. He has portrayed each utterance in its equivalent musical form with the utmost respect. Kaada exclaims it as ‘one of the most enjoyable records to make in my life.’

'It Must Have Been the Coffee'

This is a magnificent yet haunting piece. We are immediately introduced to the sound of a muffled piano playing simple, sparse chords over the delicately positioned strings. This is paired with gentle percussive sounds – most likely created by amplifying the sounds inside the piano itself - that cut through the mix at ease. Kaada utilises all sorts of creative harmonies throughout the rest of this album. ‘There are more piano sounds on the album than probably meets the ear,’ he explains. ‘The piano was played on by just about anything you can think of. Fingernails, knitting needles, guitar picks, e-bows, rubber, sticks, fans. The strings were struck, rubbed or stroked.’

The vision behind this album is a refreshingly original concept. ‘What can last words reveal about life, death and consciousness?’ asks Kaada.  ‘The words people choose before death are fascinating to read. Sometimes there is humor, wisdom, sadness, and occasionally chills.’

Both track one and two have a similarly bittersweet nature. Farewell begins with sparse wind instruments dotted around, filling the pauses and spaces surrounding the continued sustained and reverberated piano. Whilst similar in sharing this juxtaposing emotion with track one, the production of the piano in Farewell lies in stark contrast. It’s as clear as daylight. Kaada’s electronic tendencies are truly announced in this piece. ‘There’s no distinction between the acoustic and the electric generated stuff.  Sometimes I’ve tried to make the acoustic sound electrified… sometimes I’ve tried to make the electrified sound organic. Listening will hopefully be like an ever-folding reveal.’

I asked Kaada about the compositional process of three of his piano-heavy tracks on this album; Everything is an Illusion, Clearing Out, and Hey unfair, that was my exit! All feature repetitively fast moving piano phrases.

‘This was conceptually imagined and planned before I started composing them. Everything is an Illusion was composed and played as an attempt to play like bird-wings over the piano. It’s a super soft and fast rhythmical figure throughout the whole tune,’ he explains.  ‘Clearing Out came together from playing around with different chordal rhythmical figures.  The song needed some more energy, so I decided to abruptly introduce this fast-repetitive figure in the middle of the song to pump it up.’

What about Hey unfair, that was my exit? ‘The title is from a speaking bubble in a cartoon. The scenery took place in a Mickey Mouse story where the bad guy, Pete, is trapped in a space shuttle, and our hero takes the last escape capsule.   It’s the albums “action” sequence, which I felt the album needed, to make a better whole.’

‘It’s not an album about death. It’s more about sacred moments. The seriousness and the weight of the words and those seconds makes it something extraordinary.’

Knowing that you are listening to an artist’s interpretation of such sacred moments is quite a vulnerable experience. At the same time, you cannot run away from the feeling that the music you are listening to is outrightly stunning. Both Unknown Destination and Useless, Useless continue this theme.

For the former, there is a contrast between the melancholic legato theme and the surprising yet tense staccato section created by plucking the strings that represents the title to a T. The destination of this track is unknown as we jump between the two different themes.

For the latter track, we are introduced to some exceptionally stunning vocals around the 1-minute mark. These delicate breathy male vocals feel like a sign of life amongst the eeriness that surrounds them.

Track number 9, More Light, offers a sign of peace in a very different way to track 5’s Wonder Out Loud. Whilst the latter is a light, 42-second clip full of staccato phrases, the former is heavy on the electronics and just shy of 5 minutes in length. For Kaada, the sounds he has used are just as important as the harmonies and melodies. ‘No instrument combination is too absurd or strange.  Sounds sometimes come from inexplainable sources and are put together in unmentionable ways.’

Kaada has undoubtedly created a breathtakingly raw album here; one that has done justice to the farewell utterances in question. A final word of advice to other composers out there? ‘It’s about seeking the possibilities that are in the piano, be open minded, and seek what possibilities that are inherent in the instruments. Let the sounds inspire you to go down new creative roads.’

Take a listen to his new album below.