While in exile from apartheid-era South Africa, Abdullah Ibrahim took the spirit of Africa with him as he performed around the world. His music reveals many stylistic influences but also points to his spiritual beliefs, says Nick Shave

This article appeared in issue 24 of Pianist, June/July 2005.

When asked to give some indication as to what the mighty jazz pianist Abdullah Ibrahim might play on tour [back in 2005], his agent’s response is terse. ‘Abdullah Ibrahim’s concerts are journeys,” he replies. “He doesn’t play something like a playlist.” From any other jazz agent, the comment might be dismissed as cliché (well, at least he didn’t insist they’re ‘voyages of discovery’), but where Abdullah Ibrahim is concerned the agent couldn’t be closer to the truth. If Ibrahim’s concerts are like journeys, it’s because he not only does away with the written music, exploring sound from one moment to the next, but because his path in life – much of which has been spent in exile – is expressed so directly through his music. At 71 years of age [at the time of writing; he is now 87], he is one of the more worldly-wise of today’s world musicians. A spiritual traveller and music narrator, his stories speak as much through Afro-American jazz as with the tribal tongue of his South African homeland.

However far Ibrahim travels, you can be sure his music is never far from home. Look no further than the titles of his early recordings – Voice of Africa, African Piano, Echoes from Africa, African Tears of Laughter, African Marketplace, to pick just a handful – and you get a glimpse of the common theme that threads through the fabric of his work.  These days he lives in South Africa. So when his early works re-emerge in concert they not only speak of his hopes for Africa under an apartheid regime, but also the celebrations he’s had since it was dismantled in 1991.

Take a look at this amazing footage of Ibrahim in 1987, where he talks about his iconic track 'Mannenberg' before playing it live.

In short, to understand Ibrahim’s playing is to understand something of the country he comes from. He was born Adolphus Brand in Cape Town in 1934 in the same decade that the South African Bureau for Racial Affairs coined the term ‘apartheid’, calling for a policy of ‘separate development’ of the races. Ibrahim was just 14 years old when the Herstigte (meaning ‘Reformed’ or ‘Pure’) National Party came to power and officially gave the go-ahead for laws discriminating against black people.

As a black pianist, Ibrahim’s freedom was severely restricted – black groups couldn’t play for white audiences nor vice-versa, and racially mixed groups were banned. For Ibrahim, the opportunities to undertake musical studies were few and far between.

Yet he was one of the first to tap into the American jazz tradition, fusing bebop with township beats. As a young pianist – he began playing at the age of seven – he would hunt out jazz records from Cape Town’s visiting mariners. He always carried a dollar in order to ensure he never missed a bargain – hence his early name Dollar Brand (he changed his name to Abdullah Ibrahim after his conversion to Islam in the late 1960s).

His earliest influences were the recordings of the early jazz pianists such as James P Johnson, before discovering Earl Hines, Bud Powell, Thelonious Monk and Duke Ellington. Together with trumpet player Hugh Masakela and trombonist Jonas Gwangwa he formed the Jazz Epistles, who released South Africa’s first jazz record in 1960.

Desperate to play without restrictions on self-expression, he left South Africa in the aftermath of the Sharpeville massacre, heading for Switzerland to perform in a trio with bassist Johnny Gertze and drummer Makaya Ntshoko, also a South African exile. It was on the evening of their arrival in Zurich that pianist-composer Duke Ellington happened to overhear them and invited them to Paris the following day to record Duke Ellington Presents the Dollar Brand Trio (Reprise 1965). The album would launch Ibrahim’s international career.

But not all exiled South African musicians were so fortunate. “The ANC asked us to go abroad and preserve our culture, which was in danger of disintegrating,” he later recalled in a rare interview at WOMAD. “But most of these musicians didn’t have any academic background so once they were in exile, they had to depend on their instruments to survive. They were away from their families so they couldn’t count on help. Apartheid killed them.”

Ibrahim developed an intensely personal musical response to the brutal conditions that drove him into exile. After a spell of free-form jazz, he turned to his homeland for inspiration. Based up African rhythms, his playing style became characterised by harmonically static ostinato in the left hand, combined with simple melodic statements in the right. In many ways, mentor Duke Ellington influenced his approach to extended composition, and Thelonious Monk inspired his perky sense of timing.

But most of all, his playing is characteristic of his hometown Cape Town – a melting pot of diverse musical cultures and styles. In Ibrahim’s playing you can hear the traditional African rhythms of the Xhosa, for example, combined with the gospel warmth and the influence of church hymns, with their reliance upon the tonic, dominant and subdominant harmonies. 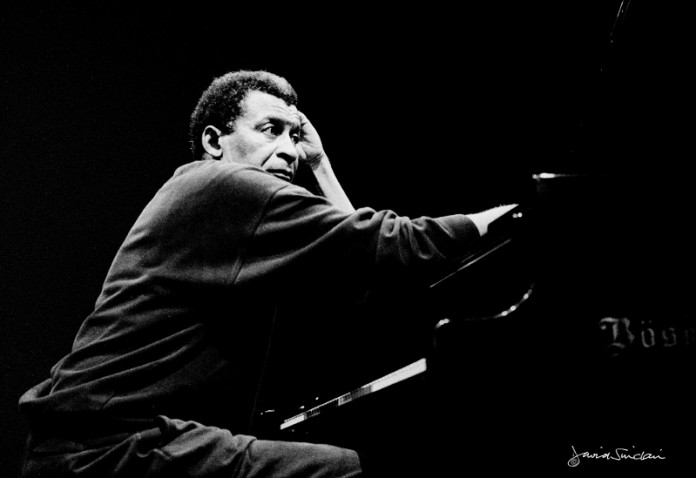 To dissect the origins of Ibrahim’s style, however, is perhaps to underplay his deeply spiritual perception of his art. As one of South Africa’s elite pianists, he’s long avoided playing in jazz clubs, scorning audiences for smoking and talking rather than listening. More fundamentally, he rejects the notion that the purpose of playing the piano is to entertain. His views are rooted in his belief that the musician – who once played a healing role in traditional African culture – has lost his way in modern urban society, veering off the spiritual path towards frivolity.

What counts in music is communication between players and an audience. Indeed, in Ibrahim’s Zen-like approach, even the pianist’s piano is superfluous to requirement. On arriving to find an audience of 500 people and no piano at one piano recital in Toronto during the early 1990s, the concert still went ahead – with Ibrahim performing with just his hands and voice instead.

Since returning to South Africa after 30 years in exile, Ibrahim has built upon the developing freedoms that have evolved since the dismantling of apartheid in 1990. One of his first initiatives was to open a music school in Cape Town, and it has since diversified into other areas of study to include dance, nutrition, martial arts, medicine and meditation – all skills that were previously denied.

As someone who has practised martial arts for the past 40 years, he identifies himself with the warriors who traditionally turn to writing Haiku poems in later life. Just as the Haikus poems make a direct, unadorned and all-encompassing statement, so Ibrahim attempts this in his playing, eschewing decorative runs in favour of solemn simplicity. In Ibrahim’s hands, each note has meaning, opening our ears to both his life and the life that surrounds us.

Nick Shave is a prominent writer, and has interviewed the likes of Jamie Cullum, Jools Holland and Hiromi for Pianist Magazine in the past.

The pianist, now 87, is still very much active on the performing circuit and has gigs in America and Europe coming up. He recently performed for the world renowned Tiny Desk Concert series on YouTube. Take a look below.