Felix Mendelssohn's 175th anniversary: A closer look at his 'Songs without Words' by Inge Kjemtrup. This article first appeared inside Pianist 67.

The name seems to invite contradiction if not outright confusion: how can there be a song that doesn’t have any words? Isn’t a song by definition something that includes words as well as music? And mustn’t the song, wordless or not, be sung – that is, be made into sound by a singer rather than an instrumentalist?

Felix Mendelssohn (1809-1847), who composed eight volumes of Songs without Words and may have originated the term, often found himself pressed into explaining or defending the new genre. ‘So much is spoken about music and so little is said,’ he wrote to a former student in 1842:

‘For my part I do not believe that words suffice for such a task and if they did I would no longer make any music. People usually complain that music is too many-sided in its meanings; what they should think when they hear it is so ambiguous, whereas everyone understands words. For me it is precisely the opposite, not only with entire speeches, but also with individual words. They too seem so ambiguous, so vague, so subject to misunderstanding when compared with true music, which fills the soul with a thousand better things than words.’

Mendelssohn had studied Schubert’s songs and admired them, but as he wrote in a letter in 1831, he was not in the same mindset as Schubert when it came to setting songs ‘Now to me, it seems completely impossible to set a descriptive poem to music.’ What could be better then, than to write a poetic, song-like piece without struggling with text at all?

The idea of these wordless songs seems to have unsettled Mendelssohn’s contemporaries. In the modern era, we are perhaps more comfortable with music being abstract. We are not so bothered if a title is not literally programmatic. But in trying to fathom this strange new genre, Schumann suggested that Mendelssohn did have specific texts in mind but just hadn’t revealed them. Others – including Mendelssohn’s cousin named Marc-André Souchay – offered to provide these weirdly wordless pieces with titles. A few well-meaning people even wrote lyrics that they presented to the composer (after his death, titles were added and they are included in most publications today).

Yet others think that it was Felix Mendelssohn’s sibling composer, his sister Fanny, who originated the genre. She herself suggested that they emerged out of the musical interplay between the two young composers. In an 1838 letter to Felix, Fanny recalled their genesis as ‘jokes that we, as mere children, contrived to pass the time’. 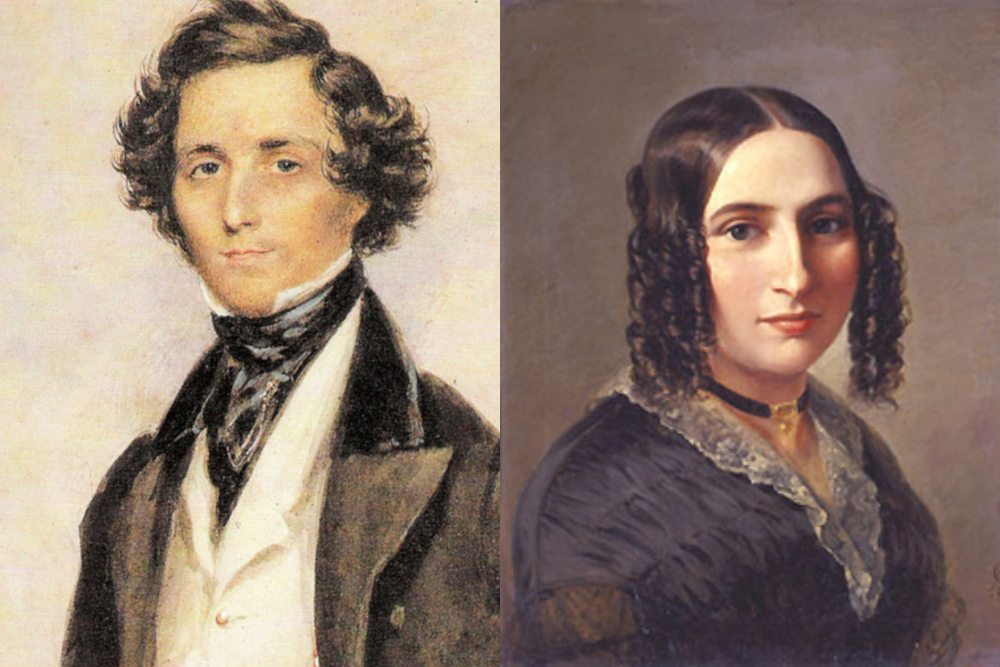 Felix Mendelssohn composed 48 Songs without Words (in its original German, ‘Lieder ohne Worte’), which, starting in 1830, were published in eight volumes. The first six volumes (Opp 19, 30, 38, 53, 62 and 67) were published while their composer was alive, while the final two (opp 85 and 102) appeared after his death. Each volume contained six short character pieces, most of which did not have titles in their original publication. Five of the first six volumes were each dedicated to a young, female pianist, typically the amateur daughter of a patron, but the fifth volume was dedicated to the concert pianist Clara Schumann. With the appearance of these six volumes, the title, the form and the conventions of a song without words was in effect codified.

In an era when every middle-class family owned a piano, these accessible and charming pieces became popular and spawned many imitators. But they were not only admired by the middle classes. On a trip to London in the summer 1842, Mendelssohn visited Queen Victoria and Prince Albert at Buckingham Palace, and presented the piano-playing royal couple with duet arrangements of several of the Songs without Words.

Their very popularity helped to give rise to the myth that Mendelssohn was a second-rate composer of trivial fluff. After all, didn’t Songs without Words belong squarely to the soft, feminine and amateur world of the home and not the competitive, masculine and professional world of the concert hall? In the century after his death, Mendelssohn and his songs seemed archaic and painfully Victorian. Yet these delightful pieces held their ground with pianists.

So are Mendelssohn’s Songs without Words trivial? Pianist contributor Lucy Parham doesn’t think so. ‘They are salon pieces and you can see why Victorian ladies loved them,’ she admits. And yet, she adds, ‘Every one of them is a little masterpiece. I like the fact that someone can make up their own titles. They each have own mood and that’s part of challenge. They are great teaching pieces, with challenges such as overlapping voices. Kids like them because they’re melodious.’

The Op 19 No 2 Song without Words – available inside Pianist 67 – is like many of the others in the set: in obvious form (many are A-B-A) and largely in melody-accompaniment form. American music historian Glenn Stanley sees many similarities to Schumann’s music but also notes that there are many factors in the Songs ‘that contribute to a new tone of expressive subjectivity’. Parham says, ‘They don’t benefit from massive overanalysing. They are beautiful vignettes, each perfectly written.’ And their perfection inspired many composers to follow suit, not least Grieg (with his Lyric Pieces) and Fauré, whose Song without Words Op 17 No 3 is also available inside Pianist 67.