American pianist Anne-Marie McDermott chats with Pianist about 10 years with Bravo! Vail, the importance of protecting classical music, and an upcoming trip to Europe...

First, our congratulations on your tenth anniversary as Artistic Director of Bravo! Vail Music Festival. In your view, what makes Bravo! Vail such a unique and special summer festival?

What makes Bravo! Vail so unique to me is the combination of the extraordinary music-making with being located in one of the most magnificent locations on planet earth, and the incredible enthusiasm and love that our audience has for the music and for the musicians.

[Over the past ten years] I feel like the Vail Valley community has fully embraced the festival and has tremendous pride about it. I played there for the first time probably twenty-seven years ago, when it was in its early infancy days, and one thing that struck me then was the audiences. They make you feel like a rock star and that has only expanded over the years.

I wanted every musician on the planet to want to come to the Bravo! Vail festival and I think we have really established deep relationships within the musical community at the festival and that feeling is so beautiful to witness. Again, one thing feeds another - the musicians, the music-making, the audiences, the mountains, the trees, the squirrels…everything.

They come on quick sometimes, the squirrels.

What have been your proudest achievements at Bravo! Vail over the past decade?

I think some of my proudest achievements are feeling like I’ve helped the public out there fall even more deeply in love with the music, and I hope I’ve demystified what you need to know to be able to deeply experience music - and the bottom line is that you don’t need to know anything. You need to have an open heart, and you need to have ears and I hope that I’ve helped to open people’s hearts up more to the music and to have their own opinion.

The other thing I’m really proud of is the ownership and the great passion that exists now for chamber music. When I started at Bravo! Vail, it wasn’t anybody’s fault, but the chamber music was a bit on the back-burner and it was all about the orchestra concerts.

We’ve been commissioning chamber music every year, multiple pieces. But I feel like it’s starting to take deeper roots in the community, and it’s important for an organization of this magnitude and this importance to be contributing to future masterpieces.

I’m also very, very proud, when I started there, Bravo was not doing very many free concerts and I looked at the Vail Chapel, right in the middle of Vail Village, and I thought this was crazy - we have to be using this venue! In most normal summers we have two free concerts a week there, every Tuesday and Thursday and the place is jam-packed with people who maybe can’t afford to come to the concerts or maybe because of their schedule they can’t come to the evening concerts.

Bravo! Vail's 2020 Summer Festival ended up looking quite a bit different than was originally planned. Can you talk a bit about how you re-imagined the festival during COVID?

Yes, talk about being proud. The day came when we could not ignore that it was not going to be possible to have our normal festival, and our cleanest, most elegant solution was to cancel in full and then go back to the drawing board, take a deep breath, take our time, and figure out possibilities.

We have to be very protective of this precious, sacred, live performance art form in classical music. We found, in my opinion, the perfect way. We were able to do concerts at the Ford Amphitheater, a three-thousand seat venue, we were able to seat one hundred and seventy-five people. People would say to me, “Doesn’t that feel strange?” I said, “I’ve never seen something more beautiful in my life.” Honestly. I would have been happy with ten people. Just the fact that we were fulfilling our mission, that we were bringing joy and comfort and inspiration to people this summer. We didn’t all realize just how much we were missing this and just how essential this is in our lives. 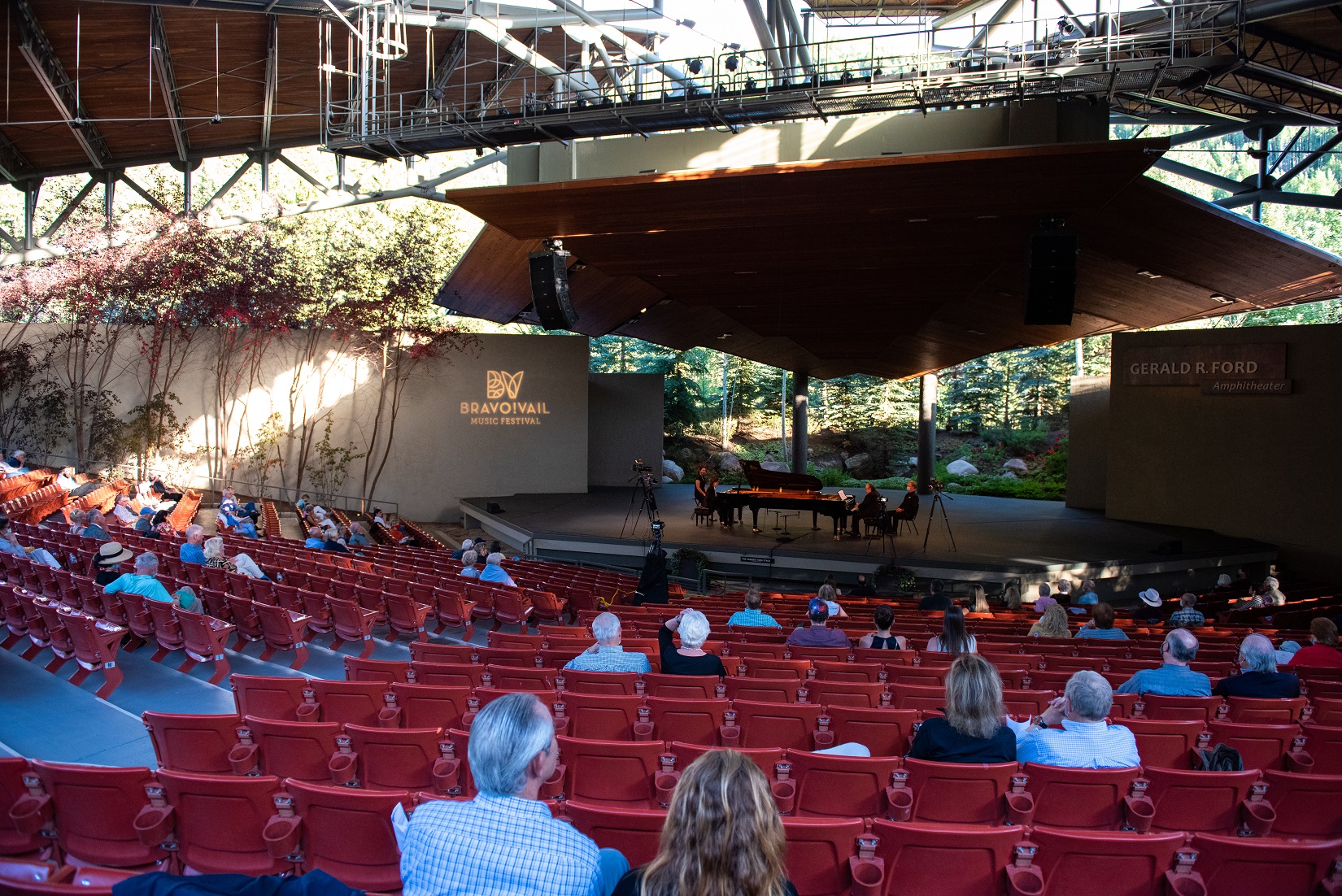 So, through our eight amphitheater concerts and the creation of the Bravo! Vail Music Box, this idea stemmed from first thinking about alright, let’s put musicians on the back of a truck and drive around and have concerts. That’s fine, but then we didn’t have quality control over the sound and music is sound, so if you’re going to have bad sound, don’t bother.

And so through a lot of teamwork, this Music Box, essentially created out of a Tiny House, was conceived of by our technical director, Todd Howe, and then he created all the blueprints, and this was created over about a month’s time. We realized in doing 41 concerts in the Music Box the power of this creation – we were able to bring it to patron’s homes who would have had no opportunity to go to a live concert but who have poured their hearts and souls into the Bravo! Vail Festival for years and have been so extraordinarily generous financially. 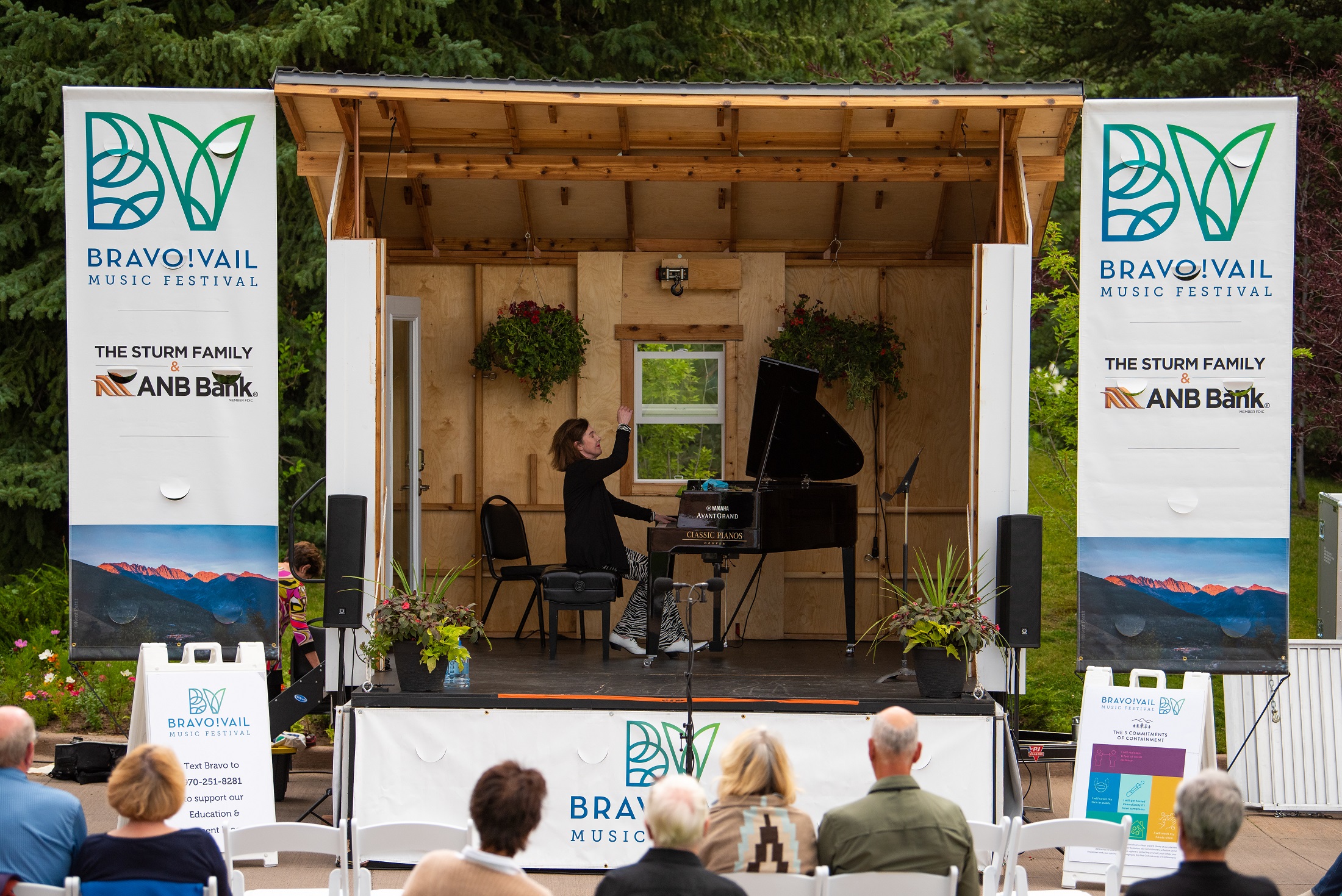 Brava. What did you learn from putting on live concerts for an audience during this time? Do you have any recommendations for other performing arts organizations?

Be brave. Be courageous. Think outside the box, and be mindful. We had to be extraordinarily mindful as everybody on the planet knows right now. Every time you go outside you have to be respectful of all the guidelines and don’t let your guard down for a minute and it is worth the extra effort. It was worth every second of the extra effort to bring live music to people and to have the honor of playing live music during this time.

Do you think Bravo’s Music Box will inspire other organizations to do a similar initiative?

I know that it will. Not to be boastful, because I felt like Bravo! Vail was very elegant with how we presented all this this summer and we weren’t boastful. We were blessed to have the opportunity, but I already know many organizations have been in touch with us about this Music Box concept and I know this is inspiring other organizations to be looking to do the same thing.

You are, of course, an extremely active soloist and chamber musician, performing more than one hundred concerts per year. This year you were able to perform a number of concerts at Bravo! Vail including performing the complete Beethoven Sonatas for Violin and Piano with violinist (and Founding Bravo! Vail Artistic Director) Ida Kavafian. How much did it mean to you to be able to perform live music again in front of an audience - both live and virtual? 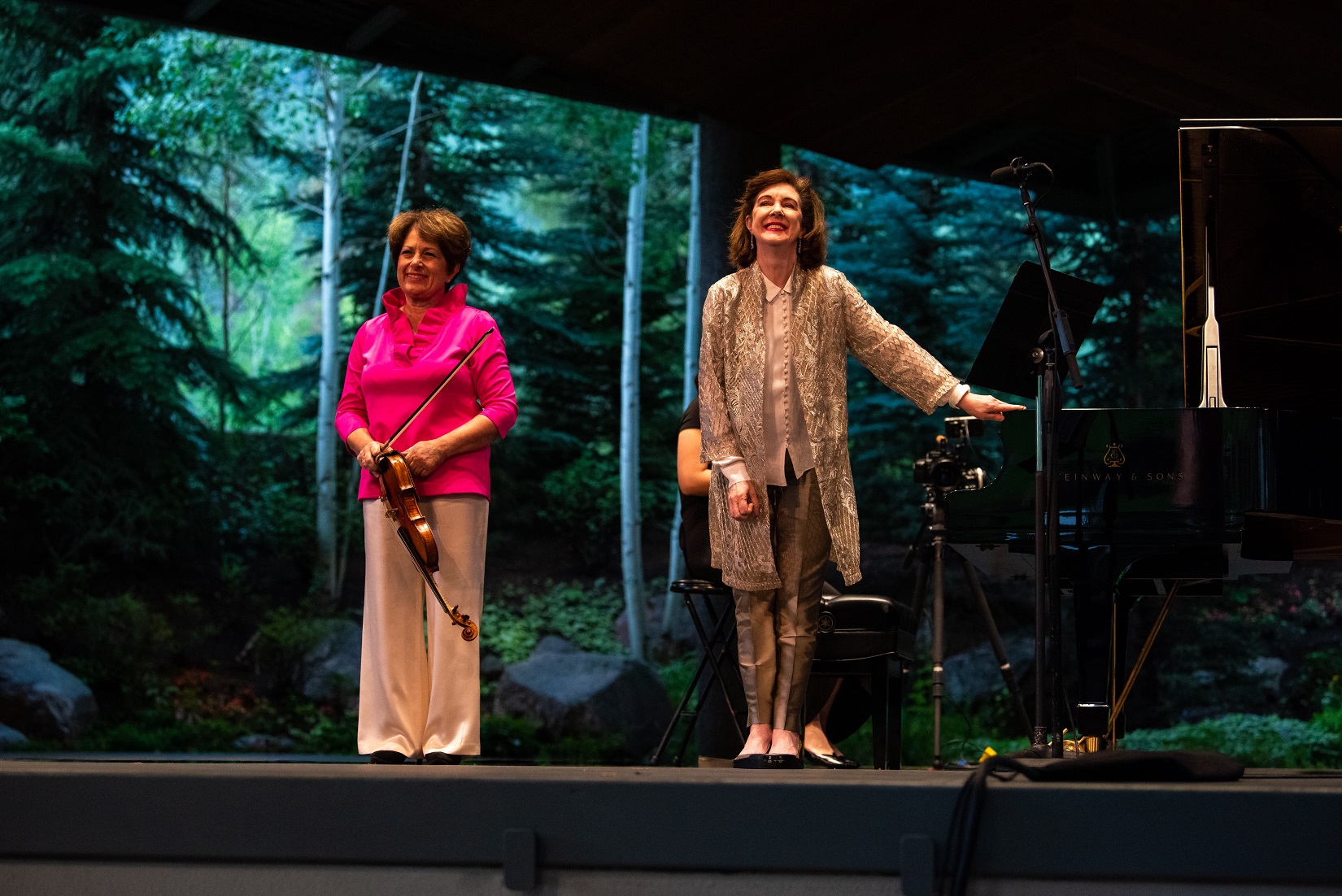 What was really incredible, and this just speaks to the power of music, I remember the concerts I played in the months that ensued after September 11th and what that felt like. Music-making had never felt like that. My first concert at Lincoln Center a week later, I literally was shaking up and down, I didn’t know how I was going to play.

These concerts this summer took on a whole new meaning. Music documents a time. It documents the emotions of a time. You can play a Bach English Suite a day after you get married and it’s going to feel one way, and you can play it after the loss of a loved person in your life and it’s going to take on a whole new meaning, and that’s what music does.

What's next on the next horizon for you, personally?

On the next horizon is – I’m knocking on wood saying it – in a little over a week I’m supposed to fly to Denmark and record two more Mozart piano concerti. This will be the recording of volume four of Mozart concerti. I’m recording all of them, and the orchestra is up and running and they’re excited, they’re ready to go and so I’m flying over there. We have five days of recording two big Mozart concertos – No. 25, K. 503 and No. 20, K. 466. and K. 503. I’m very excited.

I was supposed to premiere a new cadenza with K. 503 this summer with the Philadelphia Orchestra. Ironically, written for me as a gift by Chris Rogerson. So, I will be premiering the cadenza in a recording, and then I’m going to stick around an extra ten days or so and do all the editing for volume three and volume four so we can get those into the world.

Beyond that, I’m continuing to work on a project I started at the beginning of the pandemic which is both books of Shostakovich Preludes and Fugues.

So that, and then I have a new artistic involvement also with this really wonderful chamber orchestra in Santa Fe called Pro Musica and I’m gradually becoming the Artistic Director of Pro Musica, so during this time we’re just doing a lot of planning and I might be playing some very small concerts out in Santa Fe in that area to continue to make the organization present in people’s minds so I’m excited about that moving forward as well.

Are there any previews you feel comfortable sharing about 2021?

Yes, the Escher String Quartet will be coming to us and doing the whole Bartok cycle of string quartets, so I’m very excited about that. Yefim Bronfman is on the calendar to be coming back to us next summer.

As far as anything definite, those are – the other one I would say is we’re really excited that Fabio Luisi will be (hopefully) coming to us for the first time with Dallas Symphony as the new Music Director. And of course it is always a joy to welcome back two extraordinary conductors, Yannick Nezet Seguin and Jaap Van Zweden. We hope, hope, hope.

Thank you so much, Anne-Marie!