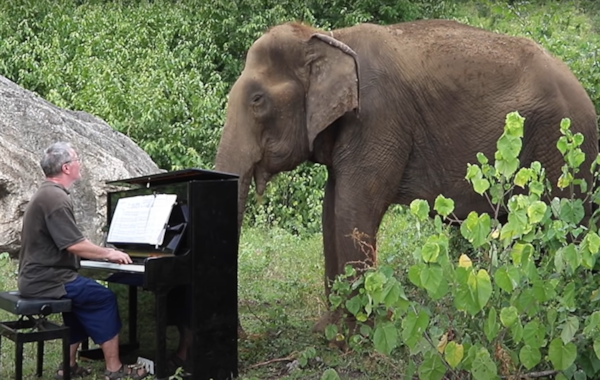 Never did we think we'd hear the words 'piano' and 'elephant' in the same sentence.

But here we are!

Englishman Paul Barton, who now resides in Thailand, has been melting the hearts of the world over on his YouTube channel where he plays the piano for blind animals at Elephant’s World – a home for rescued elephants in Thailand.

His most popular video features him playing Debussy's Clair de lune for an 80-year-old elephant called Ampan. She is blind in one eye and can barely see with the other.

Paul studied at the Royal Academy of Arts in London as a teenager before pursuing a career as a concert pianist. After some success, he soon realised it was not the life that he wanted.

He travelled to Thailand in the 1990s to teach piano temporarily, which quickly turned into a permanent stay once he met his wife. The pair work together in their art studio in Thailand, whilst Paul also has his own recording studio in Bangkok. He currently gives free online piano tutorials and lessons alongside playing the piano for the elephants over at Elephants World. Paul was also part of Amazon's 2017 documentary, Music for Elephants.

This elephant has been held captive for the majority of his life, spending his days hauling trees in the Thai forest. His body shape is deformed through hard labor, and he lost his right eye and tusk in this brutal logging practice. Mongkol was rescued and brought to Elephants World to spend the rest of his days relaxing peacefully in freedom by the River Kwai. In the video, Paul comments, "I discovered Mongkol is an extremely gentle, sensitive elephant who enjoys music, especially this slow movement by Beethoven which I play to him occasionally in the day and night."